German authorities have deployed hundreds of police in the hunt for a 31-year-old man who disarmed four officers at gunpoint, officials said Monday.

Police in the southwestern city of Offenburg said that officers are combing through rough forested terrain with the support of sniffer dogs and helicopters.

Authorities took the unusual step of naming the suspect as Yves Etienne Rausch, warning that he is carrying several firearms and known to be violent. 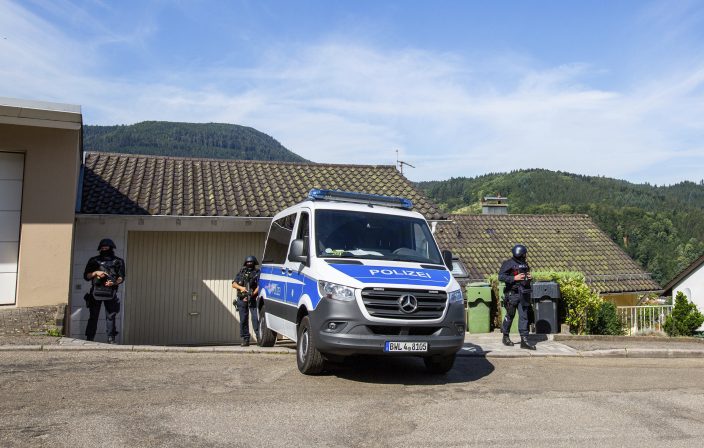 Police officers stay next to a police car in Oppenau, Germany, Monday, July 13, 2020. Authorities in Germany say they have deployed hundreds of police in the hunt for a 31-year-old man who disarmed four officers at gunpoint on Sunday, July 12, 2020. (Philipp von Ditfurthdpa via AP)

Police conducted an ID check on Rausch near the Black Forest town of Oppenau early Sunday during which he initially cooperated but then suddenly pulled a gun on officers, threatening them and forcing them to hand over their service weapons. Nobody was injured in the incident close to Germany's border with France.

Rausch is described as being 170 centimeters (around 5 feet, 7 inches) tall, bald, with a goatee beard and wearing camouflage clothing and possibly glasses.