England cricket coach Chris Silverwood refused to give any guarantees that Stuart Broad will be recalled for the second test against the West Indies, saying Monday selection was still up for grabs.

Broad was dropped for the first test of the series, which England lost in Southampton on Sunday, and gave an interview during the match in which he said he was “frustrated, angry and gutted.”

The second test starts in Manchester on Thursday and England could decide to shake up its pace attack to bring in Broad, who sits second on the country’s all-time wickets list in tests on 485. 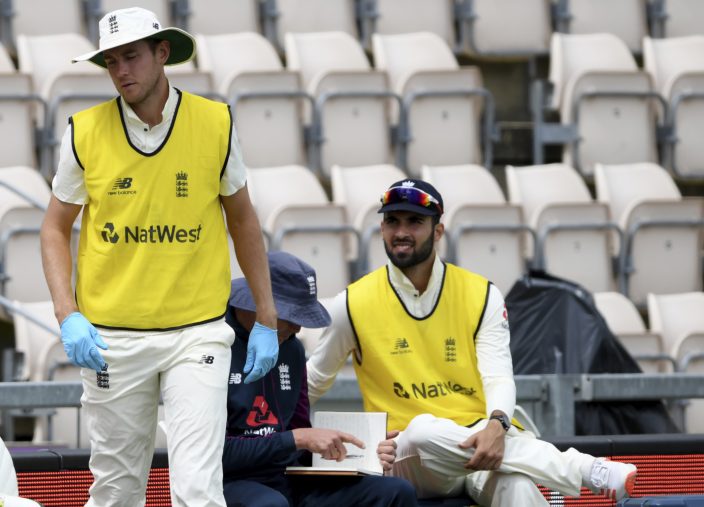 England's Stuart Broad, left, wears a disposable pair of gloves as a precaution against the coronavirus during the third day of the first cricket Test match between England and West Indies, at the Ageas Bowl in Southampton, England, Friday, July 10, 2020. (Mike HewittPool via AP)

Silverwood was non-committal, though.

When asked whether Broad is in line to play, Silverwood said: “Nothing is a given in this team, as we have seen, and people will be playing for their spots. Everything will be considered.”

England went with Mark Wood, Jofra Archer and Jimmy Anderson as its pace bowlers in Southampton.

Wood only picked up two wickets across the two innings, perhaps making him the fall guy if Broad is to return. Alternatively, England may choose to rest Anderson, who has had an injury-hit last year and might not be risked to play three back-to-back test matches.

“We have one or two stiff bodies, as you can imagine,” Silverwood said. "I have been down to see the guys already but they all seem to have come through well.

“I mean, we will probably know more after training tomorrow. We will put them through their paces and see where they are at.”

England's players will be tested for COVID-19 before making their way up from Southampton to Manchester on Monday.

England captain Joe Root, who missed the first test following the birth of his second child, will link up with the squad in Manchester and will play in the second match.

The Latest on the explosion in Bei ...