Turkey’s foreign minister on Tuesday chided the European Union over its condemnation of a Turkish decision to convert Istanbul’s iconic Hagia Sophia from a museum to a mosque, saying the matter is an issue of national sovereignty.

Last week, Turkey canceled the sixth-century former cathedral-turned-mosque’s 86-year status as a museum and said it would open for Muslim worship as of July 24.

The decision sparked criticism in the United States, Greece, and other Western countries as well as from Orthodox Christian leaders. Pope Francis expressed sadness over the move. 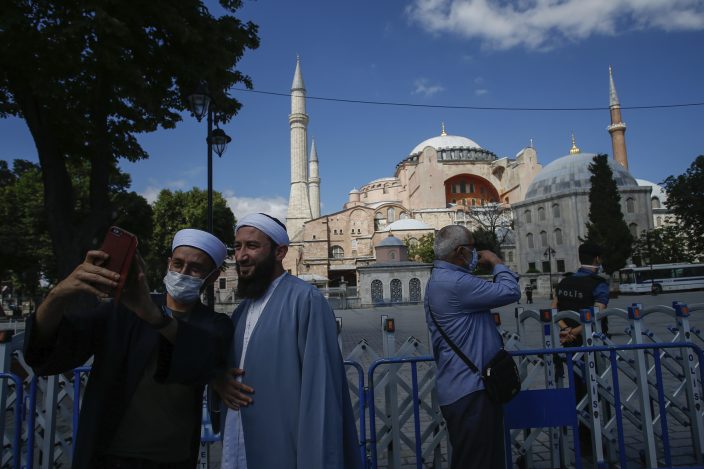 People use their mobile to take a selfie picture outside the now closed Byzantine-era Hagia Sophia, one of Istanbul's main tourist attractions in the historic Sultanahmet district of Istanbul, Saturday, July 11, 2020. Turkey's President Recep Tayyip Erdogan formally reconverted Hagia Sophia into a mosque and declared it open for Muslim worship, hours after a high court annulled a 1934 decision that had made the religious landmark a museum.The decision sparked deep dismay among Orthodox Christians. Originally a cathedral, Hagia Sophia was turned into a mosque after Istanbul's conquest by the Ottoman Empire but had been a museum for the last 86 years, drawing millions of tourists annually. (AP PhotoEmrah Gurel)

EU foreign ministers, holding their first face-to-face meeting in months on Monday, declared that they “condemned” the decision. EU foreign affairs chief Josep Borrell said there was “broad support to call on the Turkish authorities to urgently consider and reverse this decision.”

Asked to comment on the EU criticism, Foreign Minister Mevlut Cavusoglu told a joint news conference with his visiting Maltese counterpart: “We reject the word ‘condemnation.’"

“This is a matter that concerns Turkey’s sovereign rights,” he said.

He argued that there were several mosques in EU-member Spain that had been converted into churches.

“This decision is certainly painful to us as Greek Orthodox Christians but it also hurts us as citizens of the world,” said Greek Prime Minister Kyriakos Mitsotakis. “This is not a Greek-Turkish issue, it is not even a Euro-Turkish issue, it is global. It is a universal issue.”

Mitsotakis added: “With this setback, Turkey is choosing to sever ties with the Western world and its values. It abandons a cultural direction of many centuries, preferring introversion. And it wraps with an artificial mantle of strength over its weakness.”

The Christian depictions inside are no obstacle to Muslim prayers, said the officials who are preparing the site for Muslim worship. They added however, that the figures would need to be covered with curtains or through other means during the prayers, in line with Islamic traditions that prohibit such representations.