With tens of millions of Americans out of work and many businesses shut down or operating under restrictions due to the coronavirus, three of the nation's biggest banks set aside nearly $30 billion in the second quarter to cover potentially bad loans that were fine only a few months ago.

The results from JPMorgan Chase, Wells Fargo and Citigroup on Tuesday offer perhaps the broadest glimpse yet into how badly the pandemic is impacting the financial health of American consumers and businesses. Bank executives, in conference calls with analysts and reporters, said they underestimated how long the pandemic would last and its impacts on the overall economy.

Bank customers ranging from credit card holders to homeowners to oil and gas companies are in danger of defaulting due to the downturn. Thanks largely to the funds set aside for bad loans, JPMorgan's profit fell by half in the April-June quarter, Citigroup's sank about 70% and Wells Fargo reported its first quarterly loss since the financial crisis of 2008. 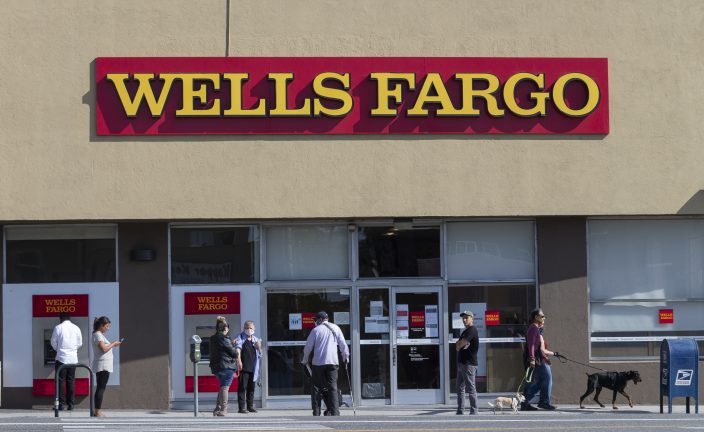 FILE - In this April 3, 2020, file photo, customers, some wearing face masks, line up outside a Wells Fargo branch in the Atwater Village neighborhood of Los Angeles, during the coronavirus outbreak. Wells Fargo, on Tuesday, July 14, says it lost $2.4 billion in the second quarter, the first quarterly loss for the bank since the real estate crash of 2008. (AP PhotoDamian Dovarganes, File)

Back in April the talk among many economists and Wall Street analysts was that the U.S. economy was going to go through a “V-shaped” recovery: the shutdowns and stay-at-home orders would cause massive job and business losses, but once reopened, things would quickly return to normal.

That scenario has not played out.

The U.S. coronavirus pandemic is now in month five, with infections hitting records in Florida, Texas and California, causing state and local authorities to again shut down parts of their economies. The trillions of dollars in economic support passed in April to keep Americans and businesses afloat is now mostly running out. Enhanced unemployment benefits expire at the end of the month unless Congress acts, and at this point many consumers are upward of 90 days past due on debts that would be in collections if it wasn’t for government and bank-sponsored forbearance programs.

Bankers now seem to be bracing for the economy to keep struggling in the months ahead. The efforts to reopen local economies across the U.S. have contributed to the growing number of infections. California, the nation's most populous state, on Monday scaled back many of its reopening initiatives as virus cases, hospitalizations and deaths all rise.

The Federal Reserve last month told the nation’s biggest banks to brace for a potential double-dip recession, with things deteriorating once again later this summer and into fall.

“The pandemic has a grip on the U.S. economy and it doesn’t look like it will loosen until a vaccine is available,” said Michael Corbat, the CEO of Citigroup, in a call with investors.

In a call with reporters, JPMorgan Chief Financial Officer Jennifer Piepszak said the bank now expects “a much more protracted downturn” than what it forecast back in April.

JPMorgan Chase CEO Jamie Dimon told reporters that the true impact of the recession will be “down the road," referring to the fact trillions of dollars in stimulus start to wear off in the coming months. The bank expects unemployment to remain above 10% into 2021 — it currently stands at 11.1%.

In its second-quarter results, JPMorgan said it set aside $10.5 billion to cover potentially bad loans. That’s on top of the $8.3 billion the bank set aside in April, when the pandemic was only just starting to impact the U.S. economy.

“Our view of the length and severity of the economic downturn has deteriorated considerably from the assumptions used last quarter,” said Wells Fargo’s CEO Charlie Scharf in the company's earnings release.

With the individual banks, the pain was magnified in the particular industries they focus on:

At Citigroup, which is one of the largest credit card issuers in the country, the bank said roughly 6% of all accounts were now in forbearance. That's roughly 2 million customers. However both Citi and JPMorgan said that consumers were at least trying to make debt payments if they could. Citi cited the relief checks that went out to Americans as a possible reason borrowers were keeping up with their debts.

Wells Fargo's pain has been compounded by the fact the bank has a large oil and gas lending business. The drop in oil prices this year has put many drillers and refiners out of business, which caused even larger loan losses for Wells on top of losses in its consumer business.

The bright spot for Citigroup and JPMorgan Chase was their investment banking divisions, particularly trading. While March saw massive declines in the stock market, in the second quarter the market has gone more or less straight back to where it was in February. Both Citi and JPMorgan's profits were bolstered by strong trading revenue.

The relationship between Andy Reid ...

Tribes see ballot collection as a lifeline in Indian Co ...

Many older people living on the ex ...

Bank of America 1Q profit falls 45% due to virus pandemic