Maybe even enough to boost the youthful Blue Jays into playoff contention.

After making a team-high 17 errors in 96 games at third base as a rookie, Guerrero quietly started taking grounders at first before spring training was shut down. When the Blue Jays gathered again for summer camp, manager Charlie Montoyo said Guerrero would be focusing on first base, for the most part. 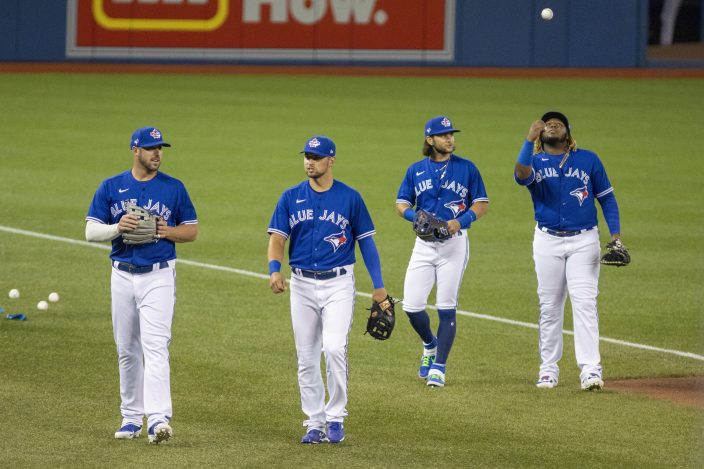 “It’s all about a player having the best chance to compete,” Montoyo said. “It’s going to be a short season, so for me the best chance for Vlad is to play first base, DH, and also play third.”

Guerrero hit .272 with 15 home runs and 69 RBIs in 123 games last year, when he was runner-up in the All-Star Home Run Derby and led AL rookies with 126 hits. Still, he flagged late on, hitting his final homer on Aug. 16 and missing occasional games because of right knee pain.

Guerrero had never even owned a first baseman’s glove before this year, but Montoyo said his 21-year-old slugger was “motivated” to move across the diamond.

Guerrero is the most heralded member of Toronto’s young position player core, a group that also includes second-year shortstop Bo Bichette. Despite a 95-loss season last year, Bichette believes the Blue Jays can compete in the 60-game sprint ahead.

“Everybody has come here focused, ready to go, ready to get the season going,” Bichette said. “There’s a lot of optimism in this clubhouse. A lot of confidence.”

Toronto begins the regular season at Tampa Bay on July 24. Exactly where the Blue Jays will play their home games is still being decided because of virus concerns, with the team awaiting word from the Canadian government.

Here are some other things to watch with the Blue Jays this season:

Montoyo said rookie right-hander Nate Pearson was “outstanding” before spring training shutdown. While he might not break camp with the team, Pearson will soon add a potent punch to Toronto’s rotation. A short season suits the hard-throwing Pearson just fine -- the Blue Jays would have otherwise faced workload issues with the 23-year old, who missed most of 2018 through injury and had his innings carefully managed last year.

IN NEED OF A NEST

Although the Blue Jays didn’t have anyone opt out, they’ve faced bigger pandemic problems. The Jays needed an exemption from the Canadian government to hold training camp north of the closed U.S.-Canada border, and were confined to their stadium and its attached hotel. Less than two weeks before the regular season opener, the Blue Jays still didn’t know whether they’d be allowed to play home games at Rogers Centre. With COVID-19 cases spiking in Florida, Toronto was wary of relocating to its spring site in Dunedin, Florida. Another potential outcome: playing just across the border in Buffalo, NY, home of Toronto’s Triple-A team.

Veteran Travis Shaw, who signed a one-year deal with the Blue Jays last December, is likely to inherit Guerrero’s vacated spot at third base. The versatile Shaw was among the finalists for the NL Gold Glove Award at the position in 2018. He has also played at first and second base, and in left field. Shaw joins Bichette, second baseman Cavan Biggio, and Guerrero to give the Blue Jays an entire infield of players whose fathers were big leaguers.

The Blue Jays will wait a while for their first series against the New York Yankees, then get a steady diet of pinstripes down the stretch. The Jays and Yankees meet 10 times in the season’s final 19 games, a challenging finish that could make or break Toronto’s postseason hopes.

No team in NHL history with a chan ...