Puig agreed to a one-year deal pending a physical, a person with knowledge of the agreement told The Associated Press. The person spoke on condition of anonymity because the agreement is not official until Puig passes the physical.

The 29-year-old Puig, who began his career with the Los Angeles Dodgers, hit a combined .267 with 24 homers and 84 RBIs for Cincinnati and Cleveland in 2019. He also stole 19 bases.

Puig was the last big-name free agent from the offseason who had not signed with a team. He helps the Braves fill a void left when Nick Markakis opted out for the season.

Glasnow re-joined the Rays on after missing the first 11 days of summer camp following his positive test. The right-hander immediately jumped into a simulated game at Tropicana Field and threw 49 pitches over 3 1/3 innings.

Glasnow said he felt fine and expects to be ready to begin the 60-game season on time. 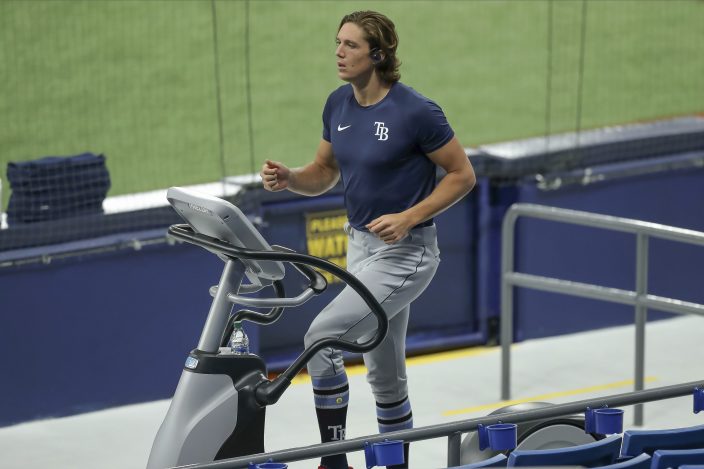 Outside of briefly losing his sense of taste and smell, the 26-year-old Glasnow said he didn’t experience any noticeable symptoms of COVID-19.

“I had maybe really mild cold symptoms for maybe a day,” Glasnow said, wearing a mask during a Zoom call. “If this wasn’t going on, I probably wouldn’t have known I was sick.”

The pitcher said he quarantined for 14 days inside his apartment in St. Petersburg, Florida. After that, he was able to work out alone, throwing into a net when he was able to find an empty park in the area.

“It would always be at a weird time of the day, and it had to be nobody there,” Glasnow said. “If there was anybody there, I would just leave.”

Glasnow, Charlie Morton and 2018 AL Cy Young Award winner Blake Snell lead a rotation that has the potential to be among the best in baseball. Glasnow was 6-1 with a 1.78 ERA in 12 starts last season.

Mets second baseman Robinson Canó also returned to camp after missing five straight workouts for undisclosed reasons. The 37-year-old Canó was scheduled to participate in practice, but not the intrasquad game at night.

Also returning was Orioles outfielder Anthony Santander, whose late arrival might have been attributed to COVID-19 testing. The team has not provided an explanation.

Santander, who hit 20 home runs last year, is a projected starter. The short-handed outfield is without slugger Trey Mancini, who had colon cancer surgery in March. Dwight Smith Jr. has not yet reported, for reasons not disclosed by the Orioles.

Marlins catcher Francisco Cervelli said “everybody is concerned” about the virus outbreak in South Florida.

“I don’t want to have this virus, or anyone on my team," Cervelli said. "We just have to be careful. We don’t know what’s going to happen. Every day here Miami is getting crazy. I’m a little scared, yes, but we’re here to play baseball.”

MORE THAN A LITTLE SCARED

White Sox catcher Yasmani Grandal is concerned about being unable to maintain proper social distancing behind the plate.

“I’d be lying to you if I said I wasn’t worried about it,” Grandal said. “Obviously, this is something you’ve got to take very serious because it can spread out as fast as anything. In my case, this is not only for my health and the health of my teammates, but it’s also for the health of my family. My wife is pregnant, so I don’t want (anything) to happen to her. I don’t want (anything) to happen to my kids. So, we’re going to take all the precautions we need in order to stay safe and keep ourselves safe.”

The surprise? Christian Yelich, who won the NL MVP in 2018 and was second in the balloting last year, didn’t get picked first. Garcia went with Ryan Braun instead.

“I want to compete against the best,” Garcia said, explaining why he didn’t pick Yelich.

The strategy didn't last long. Garcia’s team then traded Braun and shortstop Orlando Arcia for Yelich and infielder Eric Sogard. The trade was necessary because one roster had all right-handed hitters before facing right-hander Brandon Woodruff.

Indians outfielder Delino DeShields Jr. says he was taking every necessary precaution and still contracted the coronavirus while in Arizona.

“I was doing everything I was supposed to do,” he said Tuesday. “We were doing a good job in Goodyear of keeping our distance and making sure we were cleaning up after ourselves. So, honestly, I have no idea."

DeShields missed the re-start of Cleveland’s camp after he experienced COVID-19 symptoms, including a loss of taste and smell. He said he didn't have an appetite and said "It wasn’t fun at all. … It was pretty brutal.”

Max Fried, Mike Foltynewicz and Sean Newcomb are expected to follow Soroka in the rotation as Cole Hamels' recovery from a sore shoulder was slowed by triceps tendinitis.

The Dodgers are selling fan cutouts with prices ranging from $149 to $299. Net proceeds will benefit the Los Angeles Dodgers Foundation.

The team may relocate or remove the fan cutouts if able to sell tickets during the season.

The dwindling witnesses to the wor ...

Céspedes expects to be DH for Mets on opening day

MLB's testing sweep brings some success but optics are issue

Major league teams try to ramp up the competition in camp

Masking up: Protective coverings not just for MLB dugouts