The governor of the southern Japanese island of Okinawa urged the government on Wednesday to pressure the U.S. military to do more to stop an escalating coronavirus outbreak at American bases there that has infected more than 130 Marines.

Gov. Denny Tamaki flew to Tokyo to ask Defense Minister Taro Kono to share the concerns of local communities that host American bases and urge the U.S. military to be more cooperative with them.

Tamaki complained that U.S. military officials have refused to provide details of infections among U.S. service members, citing confidentiality and a risk of terrorist attacks. 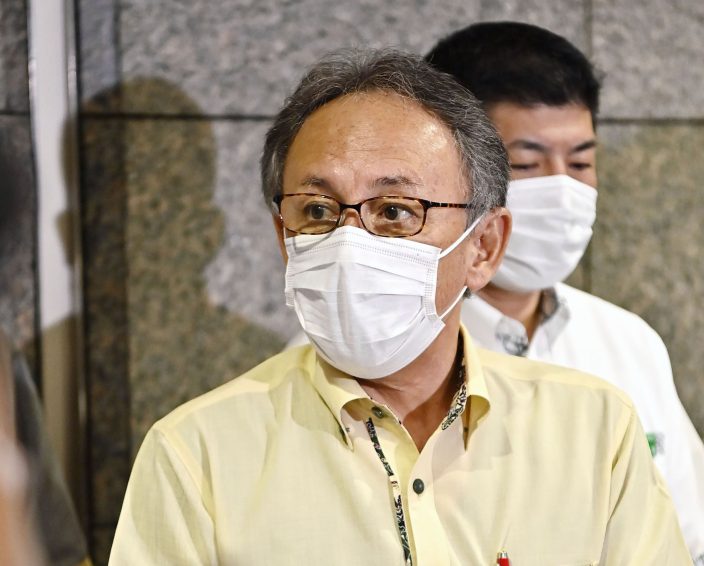 Okinawa Gov. Denny Tamaki speaks to the reporters after meeting with Japanese Defense Minister Taro Kono at the Defense Ministry in Tokyo, Wednesday, July 15, 2020. Gov. Tamaki urged Japan's government to pressure the U.S. military to better guard against an escalating coronavirus outbreak that has infected more than 130 Marines stationed on the southern Japanese island, triggering fear of infections spreading outside of the bases.(Ren OnumaKyodo News via AP)

He said 36 more cases were reported at Camp Hansen, one of several U.S. bases on Okinawa hit by the outbreak, bringing the total to 136. Most of the cases are at Marine Corps Air Station Futenma, which is at the center of a relocation dispute. Others were at Camp Kinser, Camp McTureous and Kadena Air Base.

Kono, who earlier complained that there were “a number of problems” with the U.S. military's handling of the outbreak, on Wednesday said a U.S. military family of three had tested positive after taking a commercial flight to Iwakuni in western Japan after landing in Tokyo.

“We need to have the U.S. military take concrete measures so that the infections on bases will not spread to the Japanese community,” Kono said. 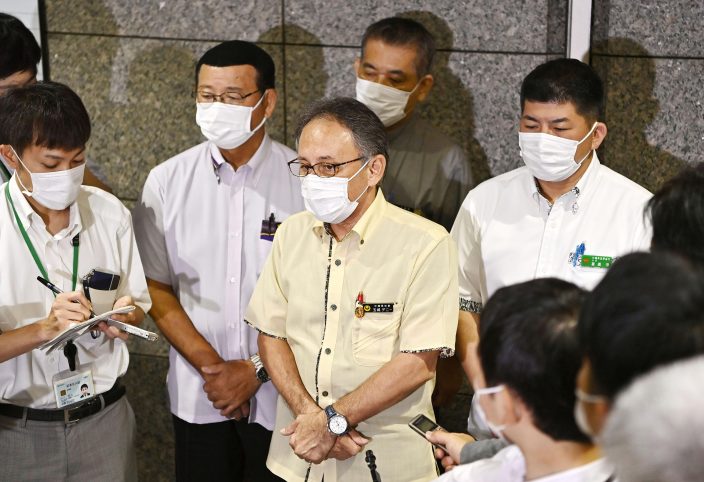 Okinawa Gov. Denny Tamaki, center, speaks to the reporters after meeting with Japanese Defense Minister Taro Kono at the Defense Ministry in Tokyo, Wednesday, July 15, 2020. Gov. Tamaki urged Japan's government to pressure the U.S. military to better guard against an escalating coronavirus outbreak that has infected more than 130 Marines stationed on the southern Japanese island, triggering fear of infections spreading outside of the bases.(Ren OnumaKyodo News via AP)

The outbreak at the U.S. bases adds to concerns in Japan as infections in the country resume rising, mostly in Tokyo where officials raised the caution level to the highest level on a scale of four.

“We are extremely concerned about the impact of the spread of the coronavirus infections on American troops' rapid response capability,” Kono told reporters.

U.S. service members and their families are not covered by a travel ban on foreigners imposed by Japan. Tamaki asked Foreign Minister Toshimitsu Motegi to revise the bilateral Status of Forces Agreement so travel restrictions will also apply to U.S. service members.

Chief Cabinet Secretary Yoshihide Suga said U.S. forces in Japan require a 14-day quarantine period for newly arrived personnel and prohibit use of public transportation, with violators subject to punishment. “We are requesting that the U.S. military in Japan implement the measures more strictly and thoroughly,” he said.

The U.S. military has told Okinawa that all infected people have been isolated and the bases are under virtual lockdown, officials said.

Okinawa is home to more than half of about 50,000 American troops based in Japan under a bilateral security pact. Residents have long been sensitive to base-related problems such as pollution, noise and crime.

Okinawans also oppose a planned relocation of Futenma Air Base from its current site in a densely populated area in the south to a less populated area on the east coast, and instead want the facility removed entirely from the island.

Outside the bases, Okinawa has reported only about 150 coronavirus cases. Nationwide, Japan has confirmed 20,000 cases including about 1,000 deaths.

Pelicans coach Stan Van Gundy out after 1 season at hel ...

All fully vaccinated players and s ...

Broncos quarterback competition goes on hiatus for 6 we ...

Dozens of US Marines in Japan's Okinawa get coronavirus