Mail deliveries could be delayed by a day or more under cost-cutting efforts being imposed by the new postmaster general. The plan eliminates overtime for hundreds of thousands of postal workers and says employees must adopt a "different mindset” to ensure the Postal Service’s survival during the coronavirus pandemic.

Late trips will no longer be authorized. If postal distribution centers are running late, "they will keep the mail for the next day,'' Postal Service leaders say in a document obtained by The Associated Press. “One aspect of these changes that may be difficult for employees is that — temporarily — we may see mail left behind or mail on the workroom floor or docks,'' another document says.

The changes come a month after Postmaster General Louis DeJoy, a major donor to President Donald Trump, took over the sprawling mail service. In a memo titled “PMG Expectations and Plan,'' the agency said the changes are aimed at "making the USPS fundamentally solvent which we are not at this time.'' 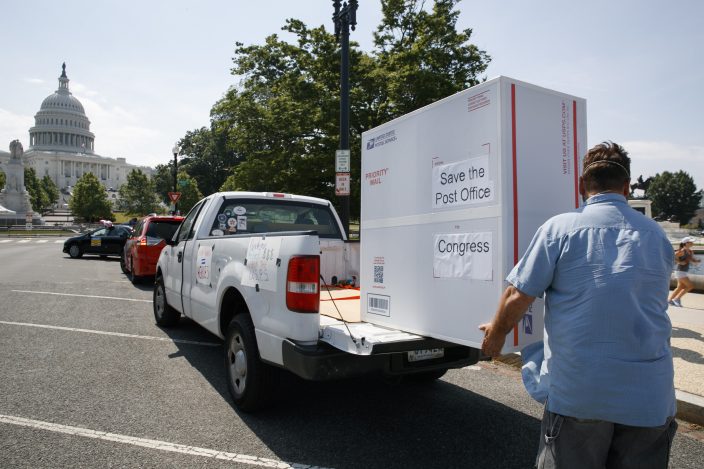 The memo cites deep revenue losses from a decadelong decline in mail deliveries that has been exacerbated by the coronavirus pandemic and says an overdue “operational pivot” is needed to ensure the agency's health and stability.

Postal Service officials, bracing for steep losses from the nationwide shutdown caused by the virus, have warned they will run out of money by the end of September without help from Congress. The service reported a $4.5 billion loss for the quarter ending in March, before the full effects of the shutdown sank in.

Single-piece, first-class mail volume fell 15 to 20% week to week in April and May, agency leaders told Congress. Losses will increase by more than $22 billion over the next 18 months, they said. 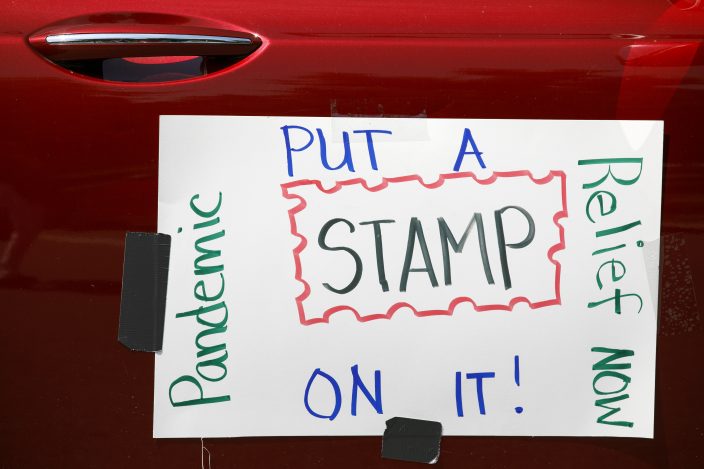 Part of a car caravan of postal employees has a sign on it asking Congress to approve emergency funding for the Postal Service, Tuesday, June 23, 2020, on Capitol Hill in Washington. The U.S. Postal Service’s famous motto — “Neither snow nor rain nor heat nor gloom of night stays these couriers” — is being tested like never before, by challenges that go well beyond the weather. Its finances have been devastated by the coronavirus. (AP PhotoJacquelyn Martin)

Bills approved by the Democratic-controlled House would set aside $25 billion to keep the mail flowing, but they remain stalled in the Republican-controlled Senate. Congress has approved a $10 billion line of credit for the Postal Service, but it remains unused amid restrictions imposed by the Trump administration.

A spokesperson said Wednesday that the agency is developing a business plan to ensure it will be financially stable and continue to provide reliable, affordable and secure delivery of mail and packages. While the plan "is not yet finalized, it will certainly include new and creative ways for us to fulfill our mission, and we will focus immediately on efficiency and items that we can control,'' said spokesperson Dave Partenheimer.

The memo cites U.S. Steel as an example that the Postal Service is far from “untouchable.″ In 1975, the steel giant was ”the largest company in the world,” the memo states. “They are gone.” In fact, U.S. Steel remains a leading steel producer, with more than 27,000 employees as of earlier this year.

The COVID-19 pandemic has put the Postal Service in a double crisis, said Mark Dimondstein, president of the American Postal Workers Union, which represents more than 200,000 postal workers and retirees.

As many as 12,000 postal workers have fallen ill, with at least 64 fatalities, and the economic contraction has caused a dramatic drop in letter and other flat mail volumes. A spike in package deliveries that has buoyed the agency during the pandemic is likely to be temporary, Dimondstein said, adding that the outbreak has sharply increased expenses for personal protective equipment, deep cleaning of facilities and temporary workers to replace postal workers who get sick.

"Postal workers are tremendously dedicated to the mission of getting the mail out,'' Dimondstein said, but the new policies could cause delays that will further drive down revenues.

"It's the customer who will suffer if the mail slows down,'' he said.

Democratic Rep. Bill Pascrell of New Jersey denounced the proposal to delay mail delivery, saying it would be a "stunning act of sabotage against our postal service.”

“Trump and his cronies are openly seeking to destroy the post office during the worst public health crisis in a century,'' Pascrell said. With states increasingly relying on voting by mail to continue elections during the pandemic, destabilizing the Postal Service not only threatens the economy and the jobs of 600,000 workers, but is also "a direct attack on American democracy itself,'' Pascrell said.

For most Americans, mail deliveries to homes or post boxes are their only routine contact with the federal government. It’s a service they seem to appreciate: The agency consistently earns favorability marks that top 90%.

Esther Haynes, of Philadelphia, said she and her family get clothes, jewelry, perfume, food and more delivered by mail. “If it’s a day late, two days late, I’ll be looking for it,” she said Wednesday. “I’d be concerned.”

Haynes, 53, shares a home with her sister, her son and a family friend. Haynes likes to shop — which means she’s been busy ordering things online during the pandemic. “Everybody wants their mail on time,” she said.

The memo outlining potential mail delays was first reported by The Washington Post.

Mohammad Ikram leans over the snoo ...