Signs in the Texas Panhandle urged voters to wear masks. Polling precincts were already staffed thin because some election workers backed out of the state's primary runoffs, cautious about the coronavirus that socked the rural meatpacking region in May.

By and large, most voters covered their faces, even though Texas' mask mandate exempts polling locations. Others adamantly made clear they wouldn't.

"It's kind of along the same lines you see in others parts of Texas — there is a faction they're not going to wear a mask unless absolutely required," said Melynn Huntley, Potter County's elections administrator. “And even then, they're going to try not to.” 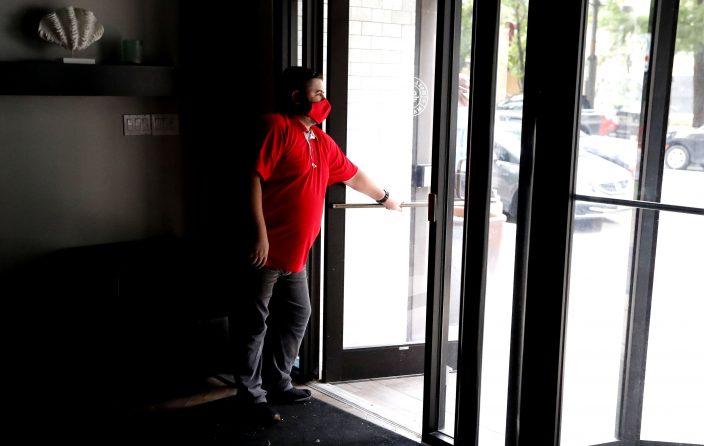 Wearing a mask amid concerns of the spread of the coronavirus, Dimitris Anagnostis opens the door to Chop House Burgers before the restaurant opened in downtown Dallas, Wednesday, July 8, 2020. (AP PhotoLM Otero)

Two weeks after Republican Gov. Greg Abbott ordered most of the state's 30 million residents to wear masks, Texas is still scrambling to contain one of the biggest coronavirus surges in the U.S., and Abbott is stressing that the widespread use of face coverings could avid another lockdown —- one he hasn’t ruled out. On Wednesday, Texas again set a new high with nearly 10,800 new cases, along with a record 110 deaths.

The rising toll includes 35 deaths that officials on the Texas-Mexico border said happened Wednesday morning alone in Hidalgo County. That was more than twice the number of new deaths reported in Harris County — which has five times the population — and where Texas' largest school district decided that Houston public schools would not only postpone the first day of class but conduct the first six weeks of learning online.

"For those people who think this virus is a joke, that it’s made up, not real, that it’s not having an impact, I want you to take a look at that chart,” Houston Mayor Sylvester Turner said, waving to a graphic listing biographical details about the new deaths.

Although it remains too early to tell the impact since Texas' mask order was announced before the Fourth of July weekend, other former holdouts to requiring face coverings continued relenting Wednesday. Republican Gov. Kay Ivey of Alabama announced a statewide mask order just a few weeks after saying enforcing one would be “next to impossible."

Walmart also said it will require customers to wear face coverings at all of its namesake and Sam’s Club stores, and the company's clout as the largest retailer in the U.S. is expected to push others to issue similar mandates.

The Centers for Disease Control and Prevention has been consistent about recommending people cover their mouth and nose when around others to help reduce the spread of the virus that causes COVID-19. But mask mandates have been highly politicized by President Donald Trump and many of his ardent supporters. Some Texas sheriffs have said they won't enforce Abbott's orders.

Others in Texas lament that residents still don't know the rules. On the border, Cameron County Judge Eddie Treviño relayed with exasperation how he watched a video on social media of a family celebrating a birthday and priding themselves on social distancing, but saying they didn't need to wear masks because they were all relatives.

“Therein lies the problem,” he said.

But he and other local officials in Texas say a mask mandate is not enough given Texas' trajectory and have called on Abbott to restore their powers to shut down local businesses. On Wednesday, officials in the Rio Grande Valley learned that a Christian relief charity that set up a field hospital in New York during the early days of the pandemic would not be putting one up on the border, even after the organization headed by Rev. Franklin Graham toured the area this week.

“I think we need to shut it down for two weeks, take control of the situation,” Hidalgo County Judge Richard Cortez told The Monitor newspaper in McAllen. "Yes there’s going to be financial consequences and other consequences to it, but how can you let this go?”

Abbott has pushed back.

“If we were to shut down for two weeks, as some people are asking, once we open back up you would then see things begin to spread again,” Abbott told Houston television station KTRK on Wednesday. “Until there are medications to slow the spread of the coronavirus, there is only one thing that can slow the spread and that is by people adopting the use of wearing a face guard of some sort whenever they go out.”

One of Haiti's most powerful gang ...

Two races into his return to Joe G ...

Texas governor rules out another shutdown as virus surges

'Were in trouble': Texas sending record help to hospitals