Earlier in the day, the Blue Jays announced they will play the majority of their home games at the stadium of their Triple-A affiliate in Buffalo, though it's not yet certain when the park will be ready.

The Blue Jays were blocked by the Canadian government from hosting this season because of coronavirus concerns, and hopes of shifting home games to Pittsburgh and Baltimore didn't pan out. 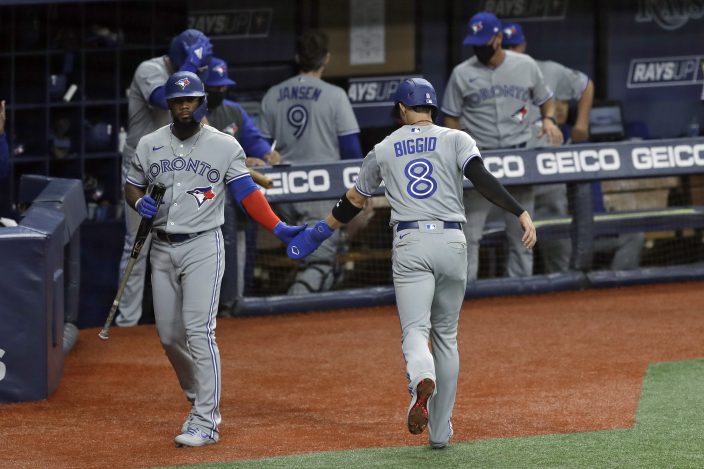 Biggio, son of Hall of Famer Craig Biggio, homered in the fifth for a 6-1 lead.

Japanese slugger Yoshi Tsutsugo homered in his major league debut for the Rays. Tampa Bay signed him to a two-year, $12 million deal after winning 96 games last season and making the playoffs for the first time in six years. 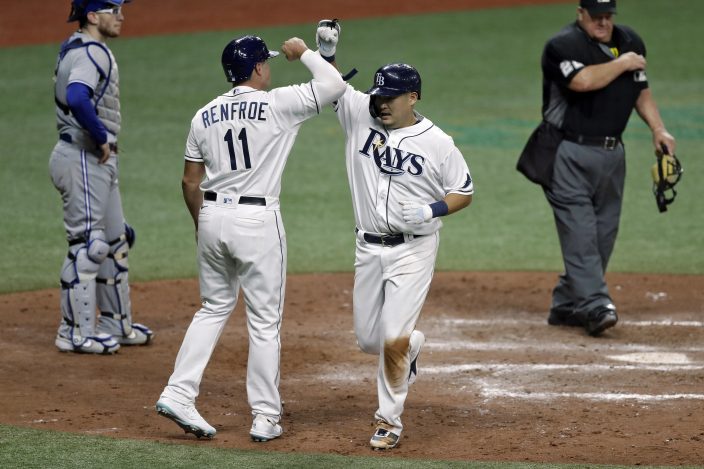 Morton (0-1), beginning his second year with the Rays, was a big part of the success in 2019 and an easy choice for his first opening night assignment after going 16-6 with a 3.05 ERA. The right-hander just wished fans, family and friends could have been in the stands at Tropicana Field to watch the start of the pandemic-delayed season.

Blue Jays starter Hyun Jin Ryu, second in NL Cy Young voting when he was with the Los Angeles Dodgers last season, allowed three runs and four hits in 4 2/3 innings. He struck out three, but also walked three before being replaced after throwing 97 pitches.

Jordan Romano (1-0) finished fifth and got the first two outs of the sixth to get the win. Rafael Dolis escaped a bases-loaded jam in the eighth and Ken Giles worked a scoreless ninth for the save. The Rays set the tone for a memorable evening with an early morning tweet focused on social justice issues, stating as an organization: “Today is Opening Day, which means it’s a great day to arrest the killers of Breonna Taylor.”

Taylor was a 26-year-old Black woman who was shot and killed in her home by Louisville police in March.

Players from both teams took the field during pregame ceremonies — the Blue Jays lined up along the third base and left field foul line, with the Rays positioned up the first base and right field line — and held a 600-foot long piece of black cloth in solidarity. 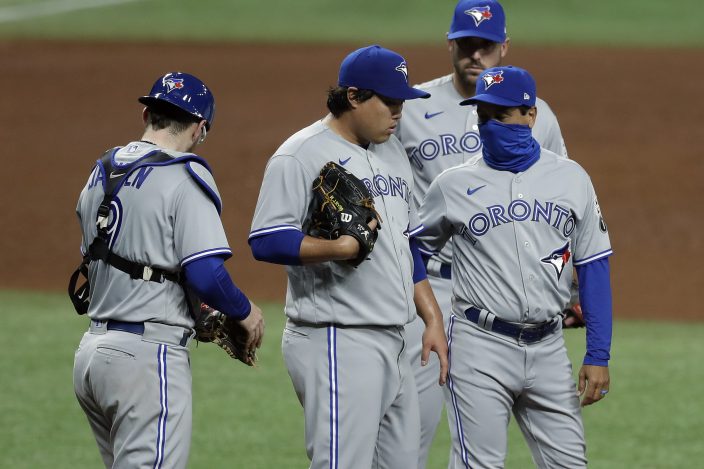 Toronto Blue Jays starting pitcher Hyun-Jin Ryu, of Korea, center, gets taken out of the game by manager Charlie Montoya, right, as catcher Danny Jansen, left, looks on during the fifth inning of a baseball game against the Tampa Bay Rays Friday, July 24, 2020, in St. Petersburg, Fla. (AP PhotoChris O'Meara)

Toronot players Anthony Alford and Santiago Espinal kneeled during the playing of the Canadian national anthem, then were joined by Biggio and Vladimir Guerrero Jr. in kneeling during the U.S. anthem.

Ozzie Timmons and Rodney Linares, Tampa Bay’s first- and third-base coaches, kneeled during the U.S. anthem while shortstop Willy Adames stood between them with a hand on each of their shoulders.

The Rays placed righty reliever Diego Castillo on the paternity list and recalled INF Daniel Robertson to fill his spot on the roster.