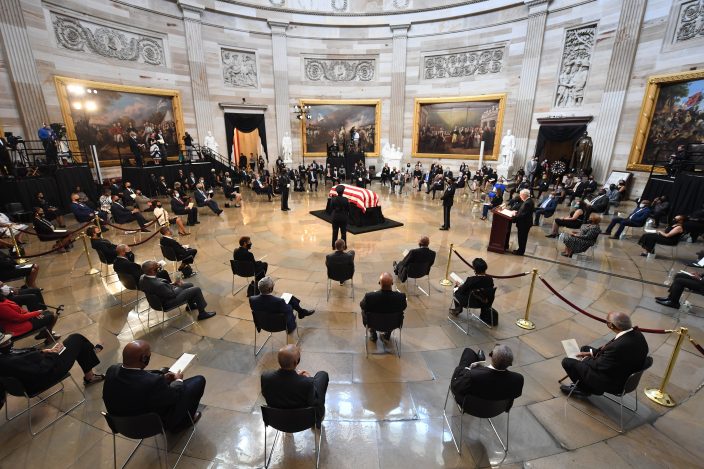 People attend a memorial service for the late Rep. John Lewis, D-Ga, as he lies in state at the Capitol in Washington, Monday, July 27, 2020. (Matt McClainThe Washington Post via AP, Pool)

VIRUS-OUTBREAK-STARVING-CHILDREN — The United Nations says coronavirus-linked hunger is leading to the deaths of 10,000 children a month in the first year of the global pandemic because of fears of contamination and movement restrictions. By Lori Hinnant and Sam Mednick. SENT: 2,280 words, photos, video. An abridged version of 980 words is also available.

A worker wearing protective gear sprays disinfectant solution inside the coffin of a person who died from suspected COVID-19, as the body arrives at the crematorium at Xilotepec Cemetery in Xochimilco, Mexico City, Monday, July 27, 2020. (AP PhotoRebecca Blackwell)

VIRUS-OUTBREAK — The biggest test yet of an experimental COVID-19 vaccine got underway Monday with the first of some 30,000 Americans rolling up their sleeves to receive shots created by the U.S. government as part of the all-out global race to stop the pandemic. By Lauran Neergaard, Michael Hill and Jocelyn Noveck. SENT: 1,100 words, photos, video. With VIRUS OUTBREAK-THE LATEST.

A box of tissues sits on the floor, which was left after the memorial service Rep. John Lewis, D-Ga, at the Capitol in Washington, Monday, July 27, 2020. (Matt McClainThe Washington Post via AP, Pool)

CHINA-US-GLOBAL-JITTERS — Tension between the U.S. and China is rattling governments around the world, prompting a German official to warn of “Cold War 2.0” and Kenya’s president to appeal for unity to fight the coronavirus pandemic. By Joe McDonald. SENT: 1,150 words, photos.

VIRUS OUTBREAK-CORONA QUEENS — The coronavirus pandemic has changed the lives of many in Corona, a Latino neighborhood in Queens that registered the highest overall case and death counts in New York City. By Claudia Torrens. SENT: 940 words, photos, video. 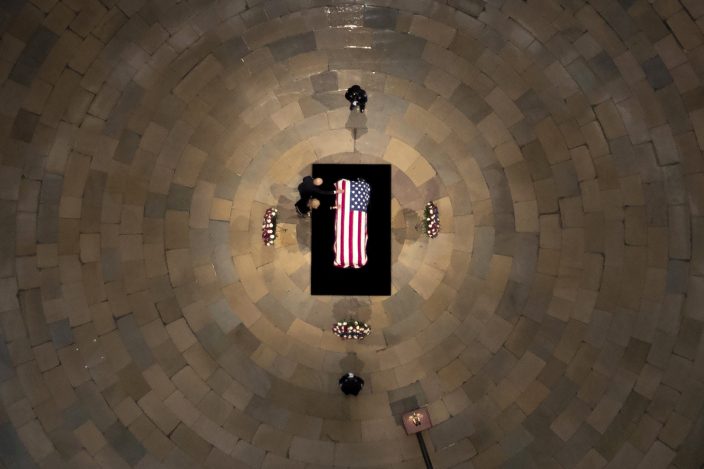 ELECTION 2020-MAIL VOTING-GOP — President Donald Trump’s campaign against voting by mail is setting his party back in the race to sign its voters up for the easiest and safest way to cast a ballot during the pandemic. By Nicholas Riccardi and Bobby Caina Calvan. SENT: 1,000 words, photos.

ATTORNEY GENERAL-CONGRESS — Attorney General William Barr will say in his opening statement at a House Judiciary Committee hearing that “violent rioters and anarchists have hijacked legitimate protests” ostensibly linked to George Floyd’s death by police and that the violence in Portland, Oregon, and other cities is disconnected from Floyd’s death. By Eric Tucker, Mary Clare Jalonick and Michael Balsamo. SENT: 950 words, photos. UPCOMING: Hearing at 10 a.m. 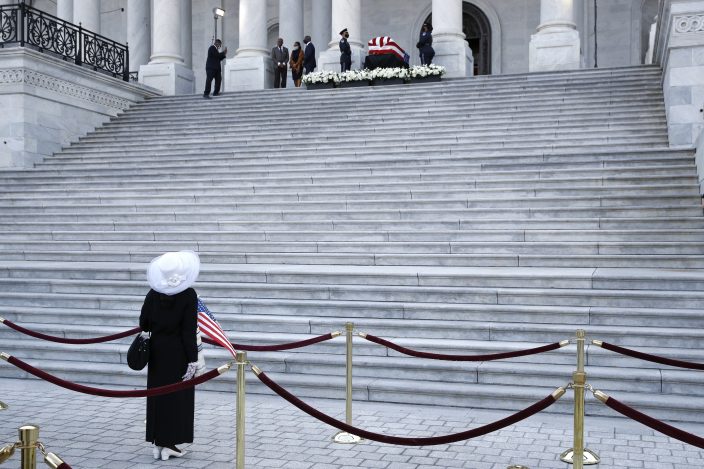 Mary Clement of Silver Spring, Md., holds an American flag as she views the flag-draped casket of Rep. John Lewis, D-Ga., as he lies in state on the East Front Steps of the Capitol in Washington, Monday, July 27, 2020. (AP PhotoPatrick Semansky)

VIRUS OUTBREAK-CHINA-VACCINE — The head of the Chinese Center for Disease Control and Prevention says he has been injected with an experimental coronavirus vaccine in an attempt to persuade the public to follow suit when one is approved. SENT: 770 words, photo.

VIRUS OUTBREAK-AFRICA’S FIRST HOTBED — For months, the city of Cape Town was the biggest coronavirus hot spot in Africa. Now, finally, there are signs of relief. SENT: 930 words, photos.

VIRUS OUTBREAK-VIRAL QUESTIONS-REINFECTION — Can you get the coronavirus twice? Scientists don’t know for sure yet, but they believe it’s unlikely. SENT: 320 words, photo.

VIRUS OUTBREAK-VIETNAM — Vietnam locks down Da Nang, its third-largest city, for two weeks after 15 cases of COVID-19 were found in a hospital, the government says. SENT: 310 words, photo.

VIRUS OUTBREAK-ATLANTA MASK LAWSUIT — Georgia’s governor says he’s withdrawing a request for an emergency hearing in a lawsuit that aims to block the state’s largest city from ordering people to wear masks in public or imposing other restrictions related to the COVID-19 pandemic. SENT: 660 words, photos.

A separate wire advisory has been sent outlining our complete coronavirus coverage.

RACIAL INJUSTICE-PORTLAND —The mayors of Portland, Oregon, and five other major U.S. cities appeal to Congress to make it illegal for the federal government to deploy militarized agents to cities that don’t want them. By Andrew Selsky and Aron Ranen. SENT: 780 words, photos.

JOHN LEWIS — The late Rep. John Lewis will lie in state for a second day at the Capitol as the public pays their respects to the civil rights icon. SENT: 1,030 words, photos, video.

BRIBERY-INVESTIGATION-OHIO — Republican state representatives in Ohio plan to meet for the first time since their leader was arrested in connection with a $60 million federal bribery probe to discuss whether to remove disgraced House Speaker Larry Householder and what the investigation’s fallout might mean for their fall legislative campaigns. SENT: 650 words, photos.

EGYPT-TIKTOK — An Egyptian court sentences several young women to two years in prison for posting “indecent” dance videos on TikTok in a fraught case that critics describe as a further crackdown on self-expression in the conservative society. SENT: 500 words.

SOUTH KOREA-JAPAN-STATUE DISPUTE — A pair of new statues in South Korea of a man kneeling in front of a girl symbolizing victims of sexual slavery by Japan’s wartime military is the latest subject of diplomatic sensitivity between the countries. SENT: 510 words, photos.

NEW ZEALAND-HONG KONG — New Zealand announces that it will follow the lead of its intelligence allies by suspending its extradition treaty with Hong Kong. SENT: 410 words, photo.

EMMY-NOMINATIONS — “The Morning Show” and “Ramy” are among the series vying for Emmy nominations as TV’s top honors strive to keep Hollywood’s awards tradition going despite the pandemic. By Television Writer Lynn Elber. SENT: 410 words, photos. UPCOMING: Nominations at 11:30 a.m.