When historians look back on the top films at the box office in the summer of 2020, they may feel like they’ve slipped into a time warp, or maybe “Back to the Future.”

Over the second weekend in July, “Empire Strikes Back” — 40 years after it was first released — was again No. 1. “Ghostbusters” claimed the July 4th weekend, 36 years after opening. Over the June 19-21 weekend and 27 years after it last led the box office, “Jurassic Park” again ruled theaters.

In a pandemic that has resurrected all kinds of vintage pastimes, from puzzles to drive-ins, even the blockbusters are retro. That is much out of necessity. About 1,000 theaters in the U.S. are currently open, just about a sixth of the nation’s cinemas. That includes the approximately 300 drive-ins that have, since the multiplexes shuttered in March, hosted the majority of moviegoing. 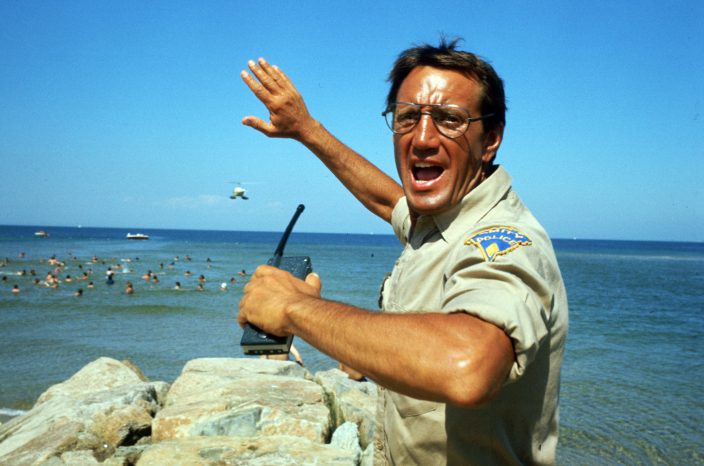 This image released by Universal Pictures shows Roy Scheider in a scene from the iconic 1975 film "Jaws." With all major new releases postponed until at least Labor Day weekend due to the pandemic, summer moviegoing has belonged to the classics. Films like “Jaws,” “E.T.,” “Goonies” and “Ghostbusters” still rank among the summer’s top draws. (Universal Pictures via AP)

With all major new releases postponed until at least Labor Day weekend, summer moviegoing has again belonged to the classics — the kinds of films that, for many, remain as indelibly linked to the season as E.T. is to Elliott. Brian Keasey, a 44-year-old in Montrose, Colorado, has been going every week, when he’s not playing movies on his backyard screen.

This is American moviegoing in the summer of 2020. A nostalgic trip to the drive-in. A white sheet hung off the patio. The comforting reunion with a great white shark. Keasey says he’s seen “Jaws” three times this summer, including once on a screen improvised next to a pond. 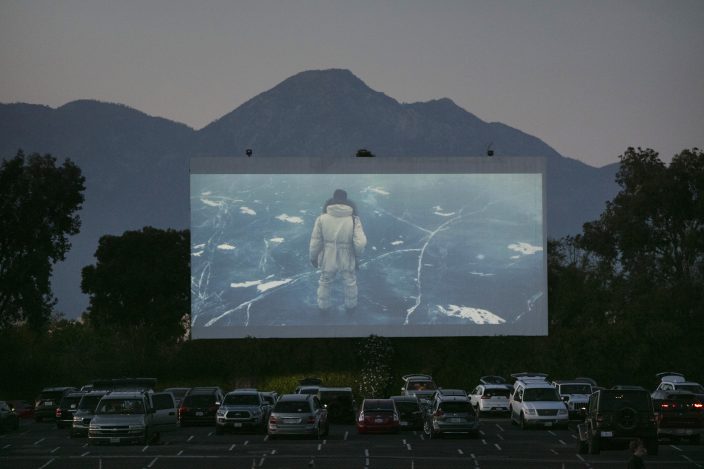 FILE - Moviegoers watch a movie preview at Mission Tiki drive-in theater in Montclair, Calif., on May 28, 2020. About 1,000 theaters in the U.S. are currently open, or about a sixth of the nation’s cinemas. That includes approximately 300 drive-ins. Mission Tiki, the four-screen, Polynesian-themed drive-in, turned into the epicenter of U.S. moviegoing. (AP PhotoJae C. Hong, File)

“It’s the classic summer blockbuster. It’s gorgeous. You can freeze frame any piece of that movie and it’s a perfect slice of 1975 America,” says Keasey. “I feel like those movies of the ’70s and ’80s had character development. Now, it’s 100% right out the gate. There’s no room to breathe anymore.”

Among catalog films, “Jurassic Park” has led them all with a bit more than $3 million in ticket sales this summer, according to several people who have seen box-office grosses. The major studios have declined to report ticket sales during the pandemic. The numbers, naturally, are extremely paltry compared to the usual billions generated in Hollywood’s prime season.

The unreported grosses for newer releases like “Trolls World Tour” and “Onward” exceed those of the repertory releases. But the likes of “Jaws,” “E.T.,” “Goonies” and “Ghostbusters” rank among the summer’s top draws. 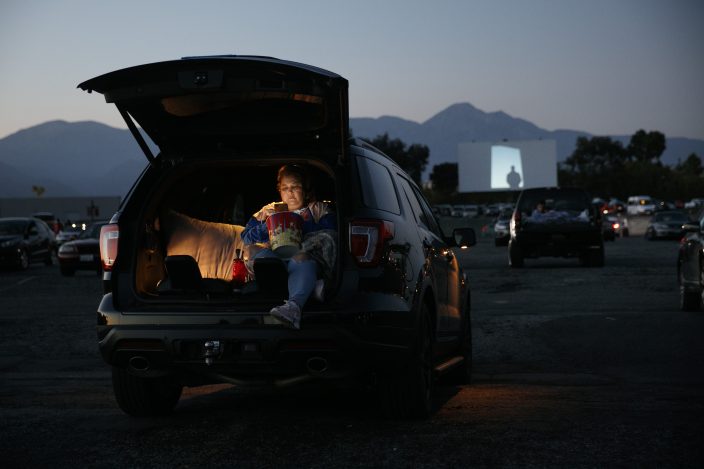 FILE - Serena Benavidez looks at her smartphone while waiting for a movie to start at Mission Tiki drive-in theater in Montclair, Calif., on May 28, 2020. About 1,000 theaters in the U.S. are currently open, or about a sixth of the nation’s cinemas. That includes approximately 300 drive-ins. Mission Tiki, the four-screen, Polynesian-themed drive-in, turned into the epicenter of U.S. moviegoing. (AP PhotoJae C. Hong, file)

That vacuum has led to some unlikely heavyweights at the box office this summer. The low-budget IFC Films horror film “The Wretched” led all reported films for seven straight weekends in May and early June, a stretch that matches the run of “Avatar.” It’s made $1.8 million in 13 weeks, an impressive total for a film made for less than $100,000.

Mission Tiki, the four-screen, Polynesian-themed drive-in in Montclair, California, outside Los Angeles and flanked by the San Gabriel Mountains, also turned into the epicenter of U.S. moviegoing. DeAnza Land and Leisure, which owns Mission Tiki and five other drive-ins, outranks all other circuits with 32% of the market share.

Typically, chains like AMC and Regal would dominate such lists, and urban multiplexes would be the top sellers. But at one point in the spring, when Mission Tiki was one of few operating theaters, the circuit accounted for close to 70% of the national gross.

Huttinger, happy for a break from bookkeeping, sounded exhausted on a recent evening. He’s never worked harder, he says.

“For a while there, we were just turning people away. Now that the theaters are operating at half capacity, we’re turning a lot of people away,” Huttinger says. “We get spillover due to sell-outs, so all screens do well, regardless of what you’re playing. Right now, ‘Goonies’ with ‘Gremlins’ is just blowing it out of the park.”

First opened in 1947, Mission Tiki’s circuit numbered 40 screens at its height. Now, it finds itself the hottest cinema in Southern California — even if it lacks the usual perks.

“Sometimes, you just can’t help doing something right,” says Huttinger. “But I promise you, nobody’s calling me for the A-list parties.”

Weekend box-office results usually function, like the top 40 radio hits, as cultural signposts. It would be hard to recall the summer of 1981 without mentioning “Raiders of the Lost Ark,” or the summer of 1977 without remembering “Star Wars.” Summer movies burrow into childhood memories.

This year, it’s possible that “Hamilton,” on Disney+, has been the most-watched movie of the summer, or that “The Old Guard,” on Netflix, filled a void. But viewership for those films, too, hasn’t been released. Anyone clinging to a collective moviegoing experience — or the feeling of a must-see movie — has had to make it for themselves.

Given the financial pressures on theaters, most of which have been closed for nearly five months, it’s not at all clear if moviegoing will survive the pandemic intact. Earlier this week, AMC Theatres and Universal Pictures agreed to collapse the exclusive theatrical window from the traditional 90 days to a minimum of just 17 days. “Jaws,” which birthed the modern blockbuster, played for 196 days.

But the big-screen for many still holds romance. Herb Geraghty, 24, began dating someone shortly before the pandemic lockdown began. They met only over Skype. For their first in-person date, they drove from Pittsburgh, Pennsylvania, to the Dependable Drive-In in Moon Township.

They first saw the indie thriller “Vast of the Night,” and on subsequent trips watched the murder mystery “Knives Out” and a double-bill of “Jaws” and “Jurassic Park.” They get there early, lay out a blanket and have a picnic. The commercials in between showings, Geraghty says, “make me feel like I’m in ‘Grease.’” A routine developed, and the relationship stuck.

“We do it pretty much every weekend now,” says Geraghty.

The Latest: Sweden to increase attendance at sporting e ...

France to ban use of wild animals in circuses, marine p ...