The first nightly protest in downtown Portland after a deal was struck for the withdrawal of federal agents guarding a courthouse was largely peaceful and ended Friday without any major confrontations between state police and demonstrators.

The scene outside the federal courthouse that started with yet another demonstration Thursday night stood in sharp contrast to the two weeks of violent clashes between the protesters and the agents sent by President Donald Trump to quell the unrest in Oregon's largest city.

State and local officers stepped up their presence as part of the deal between Democratic Gov. Kate Brown and the Trump administration to draw down the number of U.S. agents at the demonstrations that have taken place in the city for more than 60 days following the police killing of George Floyd in Minneapolis. 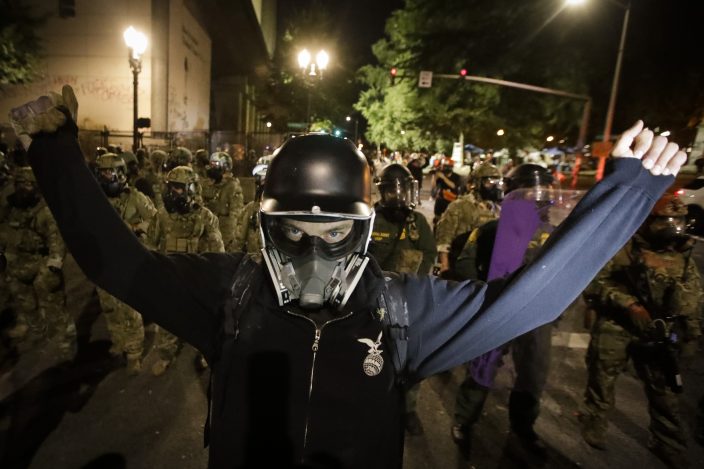 Portland's federal courthouse became a target of protesters, with the demonstrators trying to tear down a fence that was erected to protect it, lighting fires at the courthouse's entryway and hurling objects at the agents holed up inside. The agents most nights fired tear gas in return.

But at Thursday night's protest, there was little violence and few signs of confrontation as several thousand people gathered near the courthouse, the Oregonian newspaper reported.

A handful of protesters pointed lights and lasers at the building at about 10 p.m. Thursday, but state troopers remained inside and did not respond. About 30 minutes later, hundreds of demonstrators gathered about a block from the courthouse to listen to speeches. There was little sign of a law enforcement presence. The mood remained calm at 1 a.m. Friday as the crowd dwindled to about 500 demonstrators. 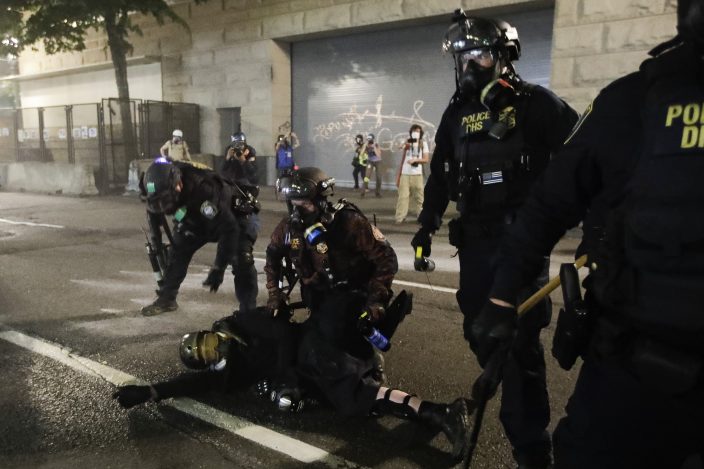 In preparation of the law enforcement handover from federal authorities state troopers, the local sheriff and Portland police met and agreed not to use tear gas except in situations with a threat of of serious injury or death, Mayor Ted Wheeler said.

Wheeler, who was gassed when he joined protesters outside the courthouse last week, added that tear gas “as a tactic really isn’t all that effective” because protesters have donned gas masks and often return to the action after recovering for a few minutes. The Democrat also apologized to peaceful demonstrators exposed to tear gas used by Portland police before federal officials arrived.

Under the deal announced by Brown, the agents will withdraw in phases. But federal officials insisted that the agents will not leave the city completely and will be kept on standby. 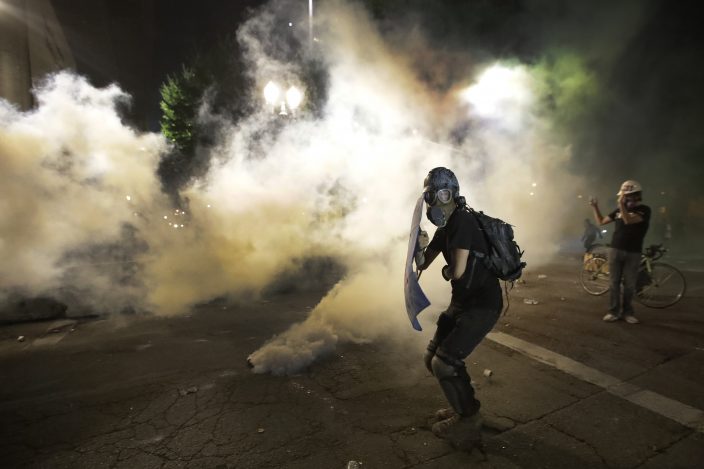 Portland Police Chief Chuck Lovell said he believes the new collaboration between local law enforcement agencies will be seen “as a victory in many ways.”

“A lot of people came out to express their displeasure of folks from the federal government here and engaging in crowd control with members of our community,” Lovell said. “So I’m hoping that on many levels that people are happy in this development.”

Portland's demonstrations have attracted up to 10,000 people for peaceful marches and rallies. The violence that has emerged was increasingly directed at federal property. 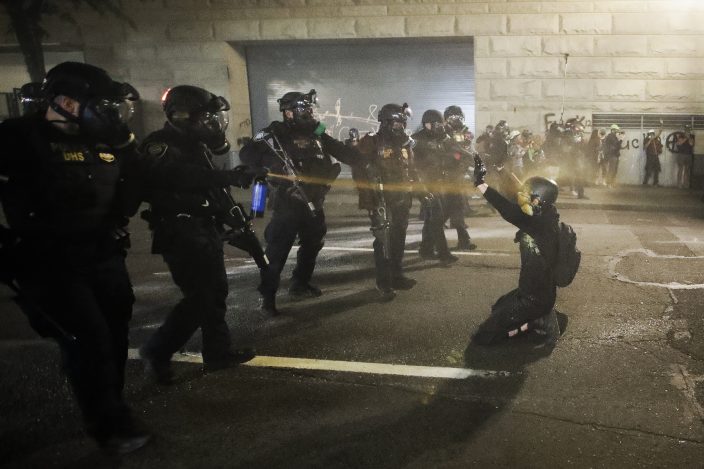 The U.S. government had arrested 94 people as of Wednesday. Over the past two months of protests, Lovell said the city police department made more than 400 arrests and tried many strategies to deescalate the confrontations.

Sara Cline contributed to this report from Salem. Cline is a corps member for the Associated Press/Report for America Statehouse News Initiative. Report for America is a nonprofit national service program that places journalists in local newsrooms to report on under-covered issues.” 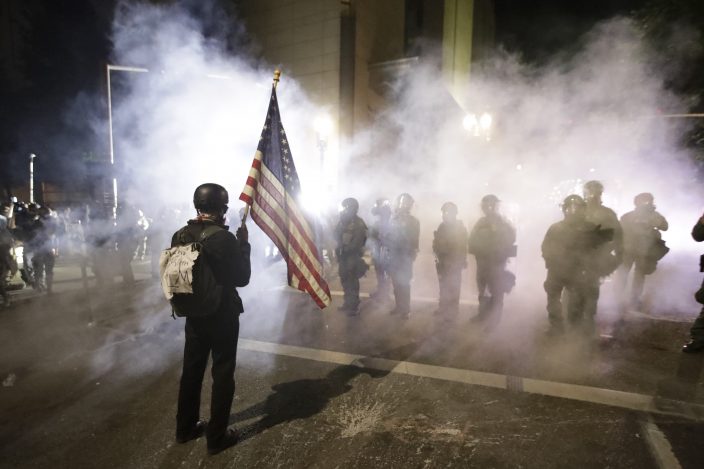 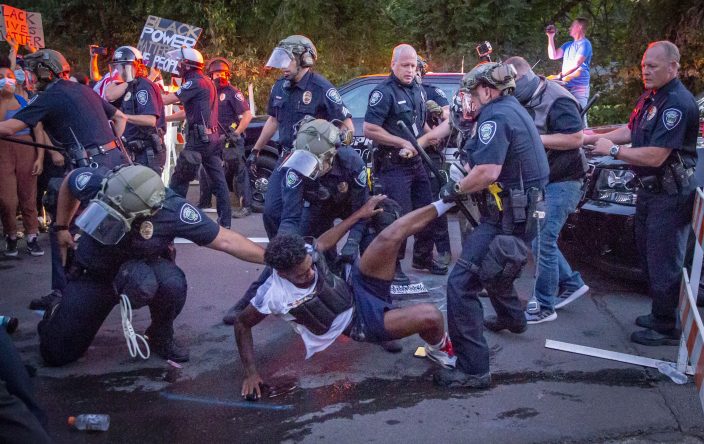 Tyshawn Ford, a leader of Black Unity, is dragged away by Springfield Police Wednesday at a barricade erected by police during a protest by the racial justice group in the Springfield, Ore. July 29, 2020. Ford was charged with disorderly conduct, interfering with police, and resisting arrest. (Andy NelsonThe Register-Guard via AP) 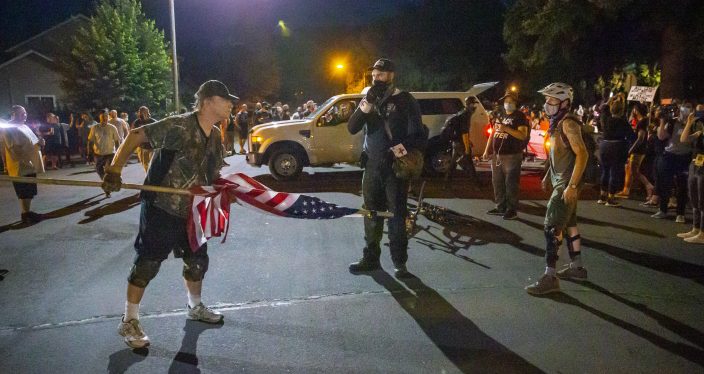 Even if Rashard Higgins was shown ...