The PGA Championship in August seems familiar enough. That's the place at the end of the major championship season that it once occupied for the better part of 70 years when it was known as “Glory's Last Shot.”

Now it's the first shot.

It's one reminder just how much the COVID-19 pandemic, which shut down golf for three months, has led to a year like no other even for sports that have been able to resume. They can be seen, but they're not heard. 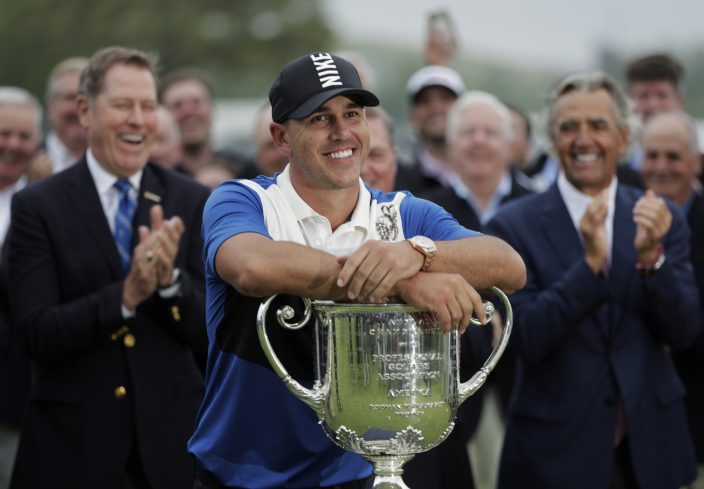 FILE - In this May 19, 2019, file photo, Brooks Koepka poses with the Wanamaker Trophy after winning the PGA Championship golf tournament at Bethpage Black in Farmingdale, N.Y. Koepka will try to become the first player to win the PGA Championship three straight times in stroke play starting Aug. 6, 2020, and there will not be anyone at Harding Park to cheer him on. (AP PhotoJulio Cortez, FIle)

Kerry Haigh was reminded of that one week out from the 102nd PGA Championship at the TPC Harding Park.

Haigh is the chief championships officer for the PGA of America in charge of preparing the public course in San Francisco for the world's best players. He was in a cart one evening, driving the cypress-lined fairways to mark them for stakes and ropes. It's one of his favorite jobs. He considers it the finishing touch.

“To me, that's what makes a championship. Once you have the ropes and the stakes up, you have a stadium to perform,” Haigh said, pausing before returning to the reality of this PGA Championship. 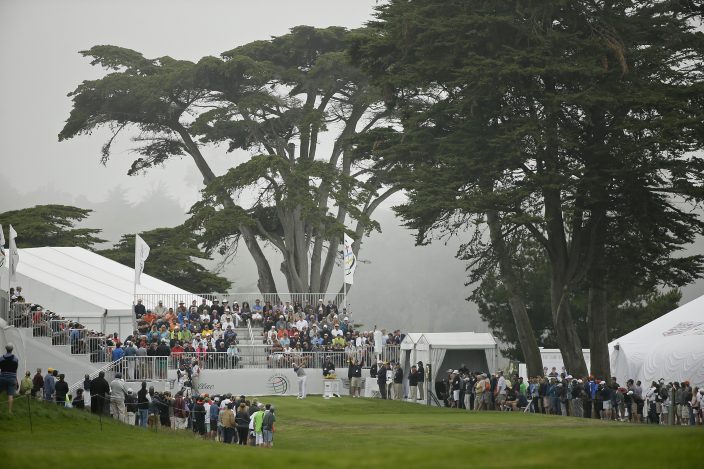 “Even if no one will be on the outside them."

Golf has spent the last eight weeks playing in silence, with only the broadcast crew, photographers, a few media, maybe a swing coach and a few neighbors if houses were on the perimeter of the course.

The stakes, however, were never this high.

Brooks Koepka will try to become the first player to win the PGA Championship three straight times in stroke play. Tiger Woods has a chance to join Jack Nicklaus and Walter Hagen as five-time PGA champions, and surpass Sam Snead for career PGA Tour victories if he can win No. 83. Jordan Spieth gets another crack at the career Grand Slam.

Maybe the PGA Championship should bring back another slogan that used to be the butt of jokes and now might be a necessary reminder: “This is major.” Without thousands of fans, without cheers coming from all corners of the course, how else would they differentiate this from any other tournament?

“We've experienced no fans, and that's been very unusual,” said Webb Simpson, who won his lone major at the 2012 U.S. Open across the street from Harding Park at Olympic Club. "We're starting to get used to it. But I think next week will feel unusual again, being a major, when there's tens of thousands lining the fairways, 10 rows deep. We're used to that — every major being sold out long in advance.

There has been little anticipation in the weeks leading up to a major, especially considering it will have been more than a year — 382 days, to be precise — since the last one.

So much attention has been on following protocols — coronavirus tests when players arrive at a tournament, before they leave if they're on a charter, the regulations for positive tests with or without symptoms. Still on the horizon is the FedEx Cup playoffs and the $15 million payoff, and two more majors (U.S. Open and Masters) before Thanksgiving.

“The fact we haven't played one in that long is weirder than the fact we're almost in the playoffs and we're about to play our first major,” Justin Thomas said.

There were times it looked as though the PGA Championship might not happen at Harding Park. Structures were starting to be built about the time organizers decided there would be no spectators and a small group of essential workers. Instead of some 3,500 volunteers, there will be 290 taking shifts.

Gone are the white scoreboards that define this major because it requires too many hands putting up names and numbers. Instead, there will be 10 video boards. Instead of tearing down the merchandise tent, Haigh said it has been converted into what might be the largest player locker room in a major.

On the course, Koepka will try for the third straight time to beat the strongest field of the majors. He outlasted Woods and Adam Scott in a thriller on the back nine at Bellerive. He set a 36-hole record for all majors and built a seven-shot lead at Bethpage Black that he almost threw away on the back nine until holding off Dustin Johnson.

Koepka has struggled with a knee injury and hasn't seriously contended anywhere in close to a year. He also has history against him. Only six players have won the same major three straight times, not since Peter Thomson at the British Open from 1954 to 1956.

Woods hasn't hardly played. He knows Harding Park as well as anyone, having won a World Golf Championship in 2005 in a playoff over John Daly, and going 5-0 in the Presidents Cup in 2009. His Masters victory last year — 16 months later, he's still the defending Masters champion — capped one of the great comebacks in sport.

But that surgically repaired back and his age is restricting how much he plays. Woods has played only three tournaments this year, and he goes into the PGA Championship having played once — a tie for 40th at the Memorial — in six months.

“It was good to get the feel and flow of competing again,” Woods said at the Memorial, and then he took two weeks off.

As for Spieth, this is his fourth crack at the career Grand Slam, and each year the odds get longer. He hasn't won anywhere since getting the third leg of the Grand Slam at the British Open three summers ago. But he's never come into a PGA Championship with less attention. Some of that is his play. Some of that is the distractions of playing amid a pandemic.

Any one of them can take their place in history for various reasons. Any player in the field can experience a life-changing moment of winning a major. All of them will have to do it without anyone cheering them along.

The potential Big Ten game of the ...