Carter Hart stopped 34 shots, and the Philadelphia Flyers opened the NHL expanded playoffs seeding round with a 4-1 win over the Presidents’ Trophy-winning Boston Bruins on Sunday.

Hart is 11 days shy of his 22nd birthday in becoming the youngest goalie in Flyers history to win a playoff game. Michael Raffl had a goal and assist, while Nate Thompson, Philippe Myers and Scott Laughton also scored for the Flyers.

With 16 teams competing in best-of-five elimination series, the top four teams in each conference are playing a round-robin series to determine seeding entering the first round of the playoffs. Philadelphia finished fourth in the Eastern Conference standings, and the Bruins first. 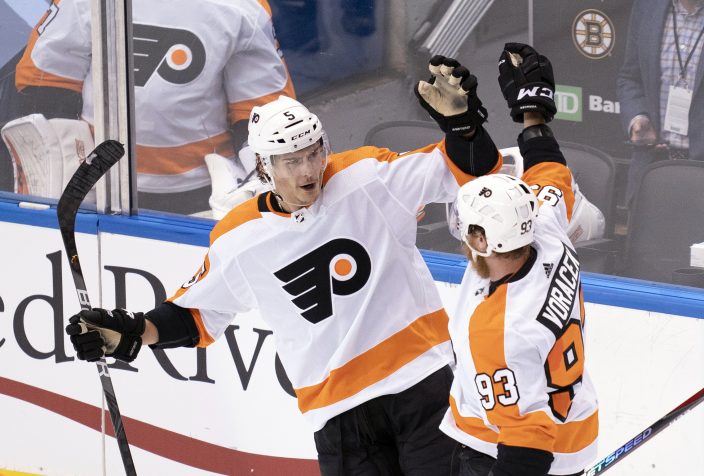 Chris Wagner scored for the Bruins, who came out flat and were without starting goalie Tuukka Rask, who was deemed unfit to play.

Jaroslav Halak stopped 25 shots starting in place of the Vezina Trophy finalist, who broke a finger on his left hand before the start of training camp.

Rask was healthy enough to start in Boston’s 4-1 exhibition game loss to Columbus on Wednesday. He allowed three goals on 23 shots over 30 minutes, before giving way to Halak. 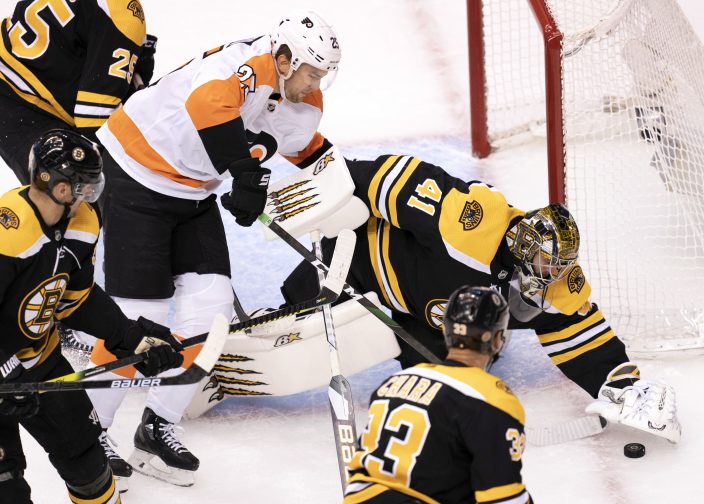 Hart closed the season going 9-2 and allowing 21 goals, and surpassed Pete Peeters, who was nearly 23 in winning Game 1 of Philadelphia's preliminary series over Edmonton in 1980.

The Flyers were among the NHL’s hottest teams before the season was paused in March because of the coronavirus pandemic. Philadelphia had won nine straight before a 2-0 loss to Boston on March 10, the two teams’ final game before play was stopped.

On Sunday, the Flyers were the more physical and opportunistic team in capitalizing on the Bruins’ sloppiness. 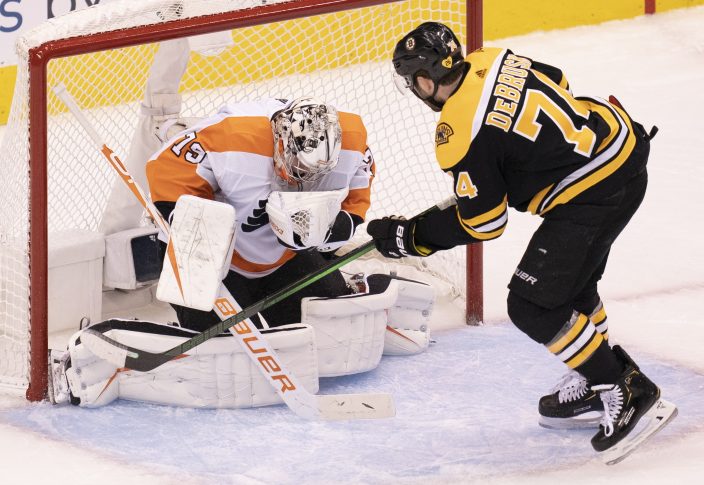 Raffl opened the scoring 5:33 into the second period when he was set up alone driving to the net by Travis Sandheim, who kept the puck in at the blueline. Thompson scored 3:58 later with a snap shot from the left circle on a play that began with teammate Ivan Provorov pouncing on a Bruins’ turnover in the neutral zone.

And even when the Bruins scored on Wagner’s wrap-around goal with 1:09 left in the second period, they allowed the Flyers to regain the two-goal edge on Myers’ goal 8 seconds later.

Boston’s Anders Bjork appeared to misplay the puck in the neutral zone, allowing Myers to drive up the left wing and snap a 40-footer inside the far post. 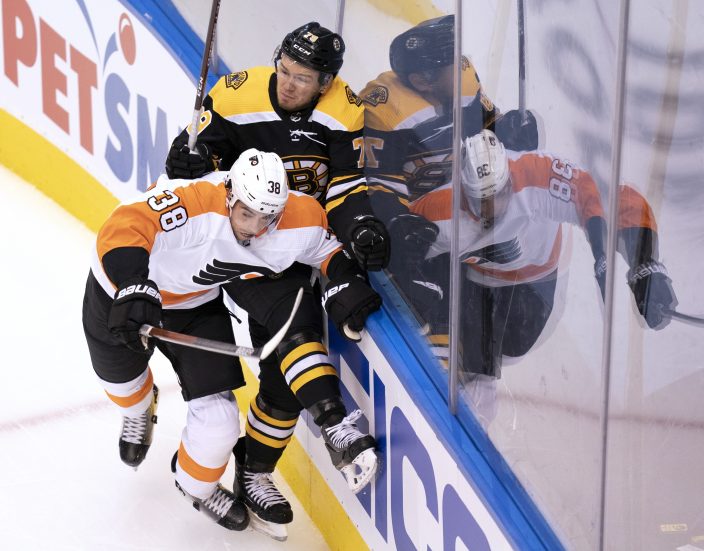 Laughton then sealed the win 4:07 into the third period, when he drove in alone after teammate Kevin Hayes forced Brandon Carlo to turn over the puck at the right point of the Flyers’ zone.

After leading the NHL with 44 wins and 100 points and allowing a league-low 167 goals, the Bruins have endured their share of hiccups following the 4 1/2-month break.

Then Rask broke his finger working out.

Though guaranteed a spot in the first round, the Bruins looked nothing like a team with a “Stay Hungry” tagline, in reference to losing the Game 7 of the Stanley Cup Final to St. Louis last year.

The game lacked the intensity and chippiness of the elimination-round series games that preceded it, and reflective of two teams easing their way into action, already assured of advancing.

One of the better checks was delivered by Philadelphia’s Nicolas Aube-Kubel, who stood up Carlo along the boards in the Bruins’ zone four minutes into the second period

NOTES: The Bruins have four players with 100-plus career playoff appearances: Zdeno Chara (182), Patrice Bergeron (137), David Krejci (132) and Brad Marchand (108). ... The Flyers have one player with 100 or more career playoff appearances, D Matt Niskanen (125), none with Philadelphia, and 70 during his tenure with the Washington Capitals. ... Bruins players stood arm in arm at their blue line for the anthems, while coach Bruce Cassidy linked arms with his staff on the bench.