Chinese and Australian diplomats sparred on Twitter over Beijing’s actions in the South China Sea following Australia’s endorsement of a U.S. statement that it would recognize virtually none of China’s territorial claims there. 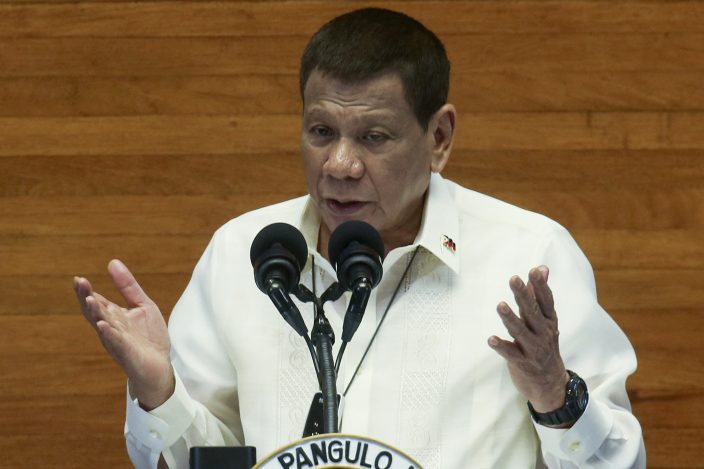 FILE - In this July 27, 2020, file photo provided by the Malacanang Presidential Photographers Division, Philippine President Rodrigo Duterte gestures as he delivers his State of the Nation Address (SONA) at the House of Representative in Metro Manila, Philippines. Duterte has expressed helplessness in the face of China’s seizure of Philippine-claimed territories in the South China Sea. (Simeon Celi Jr.Malacanang Presidential Photographers Division via AP)

Australia recently filed a memorandum with the United Nations saying the claims were “without legal basis,” plunging Canberra into the controversy that has drawn angry responses from Beijing.

O’Farrell shot back saying China should follow a 2016 international tribunal ruling that rejected most of Beijing's claims. China has denounced the ruling as “illegal” and without any “binding force.”

O’Farrell’s comments drew strong praise from internet users in India, where the public and politicians have called for a tougher line against China following a bloody clash along their disputed border.

China said that long-range bombers were among the aircraft that took part in recent aerial drills over the South China Sea amid rising tensions between Washington and Beijing over the strategic waterway.

He said the exercises had been previously scheduled and were aimed at boosting pilot abilities to operate under all conditions, regardless of weather or time of day. It wasn’t clear whether live bombs were used.

China has built airstrips on many of its island holdings in the South China Sea, including man-made islands atop coral reefs. It isn't clear though whether it plans to permanently station aircraft there, where sand and salty air can do serious damage to air frames and sophisticated on-board equipment.

Chinese ships, including the country's two aircraft carriers, conduct frequent operations in the area, sometimes to trail and occasionally harass ships from other countries.

U.S. and Australian diplomats and defense ministers pledged to renew and strengthen a united front against China and what they termed Beijing’s malign behavior throughout the region and beyond.

The two sides — represented by U.S. Secretary of Mike Pompeo, U.S. Defense Secretary Mark Esper, Australian Foreign Minister Marise Payne and Australian Defense Minister Linda Reynolds — on Tuesday accused China of violating international norms in the South China Sea and vowed to uphold freedom of navigation and the rule of the law as well as democratic freedoms in Hong Kong.

Pompeo said the U.S. and Australia face “immediate crises” that must be dealt with simultaneously. Those include the coronavirus and “Chinese communist party ambitions,” particularly its “malign activity in the Indo-Pacific region and indeed all around the world.”

Philippine President Rodrigo Duterte has expressed helplessness in the face of China’s seizure of Philippine-claimed territories in the South China Sea.

In an annual address to the nation last Monday, Duterte said he “cannot do anything” to counter those actions in the face of China’s overwhelming military superiority.

China has effectively taken possession of territories the Philippines claims and Manila’s only option is to seek to cool tensions through dialogue, he said.

However, the Philippines last month renewed its call for compliance with a 4-year-old arbitration ruling that invalidated China’s vast claims in the disputed South China Sea on historical grounds.