Peter Thomson might have been up to his old tricks. He once described the Americans as the “greatest collection of golfers in the world” right before he captained an International team that annihilated the U.S. in the 1998 Presidents Cup.

So what to make of his prediction at Carnoustie nine years later? Tiger Woods was going for a third straight British Open title, a feat accomplished only six times in major championship history, most recently by Thomson in 1956.

“He has a chance to win eight in a row,” Thomson replied. 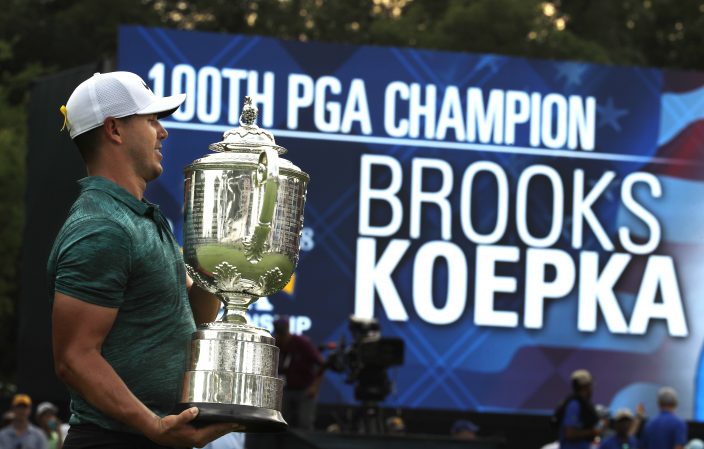 It wasn't clear if Thomson was joking or trying to create even more attention for Woods. By the end of the week, it was a moot point as Woods tied for 12th. Woods won majors at a faster clip than anyone. He remains the only player to win multiple majors in consecutive years. But he never won the same major three straight times.

Neither did Jack Nicklaus. The one chance he had, Nicklaus missed the cut going for a third straight Masters. Tom Watson shared the 54-hole lead at St. Andrews in 1984 in his bid for a third straight British Open. He closed with 73 and finished two shots behind Seve Ballesteros. 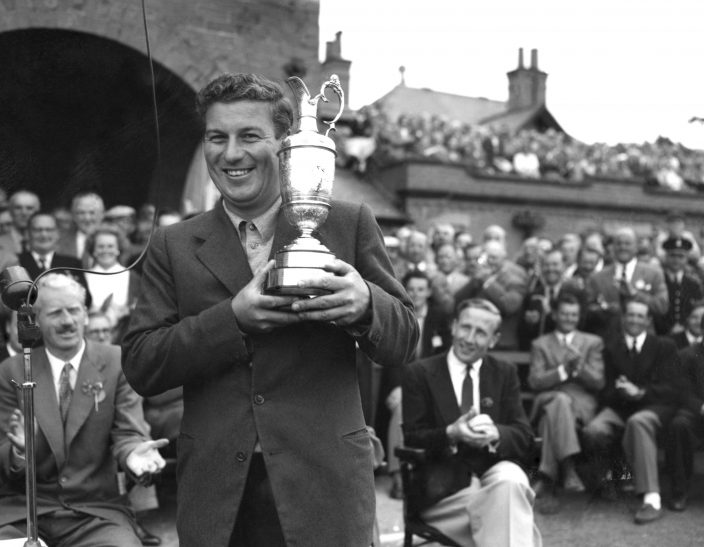 FILE - In this July 6, 1956, file photo, Peter Thomson, of Australia, holds the trophy after winning the British Open Golf Championship at Hoylake, Liverpool, for his third consecutive win in the tournament. Thomson was the last player to win the same major three straight years. Brooks Koepka has that chance this week in the PGA Championship. (AP Photo, File)

The list of failures is much longer than the six men who actually won the same major back-to-back-to-back.

That's why the biggest challenge facing Brooks Koepka as he goes for a third straight PGA Championship this week at the TPC Harding Park in San Francisco is more about history than his troublesome left knee and recent form.

“I just want to play good golf. It's simple,” Koepka said when he went to Bay Area in February to preview a PGA Championship that was supposed to be held in May before the COVID-19 pandemic upended golf's calendar.

“You start thinking about all the things that could happen, that's when nerve, everything else kind of creeps in. Just stay in the moment and keep plugging along.”

Koepka already has had one crack at a three-peat and showed why he can't be overlooked. Trying to become the first player in more than a century to win the U.S. Open three straight times, he chased Gary Woodland all the way to the finish line at Pebble Beach and finished second.

Then it was all about Willie Anderson, the only player to win three straight U.S. Opens. Now it's about Walter Hagen, who won the PGA Championship four straight times (1924-27) when it was match play.

“Walter Hagen is a name every golf fan knows,” Koepka said. “To even have a chance to put my name with his would be incredible and it would be super special. ... Two-time defending, it's a different feeling, and one you want to win this year.”

Koepka won a thriller at Bellerive in 2018, when he set the PGA Championship scoring record at 264 and matched the lowest score at any major. He nearly blew a seven-shot lead last year at Bethpage Black before winning by two. It helped that he set the 36-hole record for all majors at 128 with what he calls the best golf he ever played.

But this isn't the same player. Koepka had stem cell treatment after last season because of a partially torn patella. Two weeks later, he slipped on a wet slab of concrete at the CJ Cup in South Korea and injured his left knee further, keeping him out for three months. And then he lost another three months to the pandemic.

He has gone a year without winning. Last week at the World Golf Championship, he said he is adjusting his swing to accommodate his left knee and Koepka had his best chance of winning, tied for the lead until hitting into the water off the tee on the final hole as Justin Thomas won.

For someone with this much history on the line, Koepka still has managed to avoid the spotlight in the weeks leading into the PGA Championship. Attribute that to the pandemic, and the PGA Tour's return to golf two months ago in which positive tests — eight so far — get as much attention as birdies and bogeys.

“We're in different times now,” said Curtis Strange, part of the ESPN broadcast team who had his shot at three straight U.S. Opens in 1990. “All sports have been put on the back burner just a little bit. I haven't read a lot about it, and I've talked a couple times to reporters about three in a row. ... But it would be a hell of an accomplishment.”

Woods has won at least three straight times at four PGA Tour events — three in a row at Firestone and Memorial, four in a row at Torrey Pines and Bay Hill. Just not in the majors.

He has gone back-to-back in the Masters and British Open, and twice in the PGA Championship. He tied for 29th in the 2001 PGA in Atlanta. He tied for 15th in the 2003 Masters. He tied for 12th at Carnoustie. He never got a chance in 2008 because of season-ending knee surgery.

The Masters is the one major no one has won three straight times, and Woods knew it. He also knew the opportunity was rare. “If you're ever in that position, you want to take advantage of it because it doesn't happen all the time,” he said.

He went 21 holes before making his first birdie. He opened with a 76, his worst start in a major. And he never had another shot at three straight Masters.

When the coronavirus pummeled Duba ...