Children returned to school Monday in the northeastern German state of Mecklenburg-Western Pomerania, the first in the country to start the new school year following nationwide shutdowns at the height of the coronavirus pandemic in March.

Federal Education Minister Anja Karliczek has advocated mask requirements inside school buildings. But the school system is largely a matter for the 16 state governments in Germany, and as the state's 152,700 pupils returned to class in cities like Rostock and Schwerin, regional officials had not yet implemented such a rule.

The sparsely populated state has been Germany's least-affected by the pandemic, with 877 positive tests for COVID-19 and 20 virus-related deaths among its 1.6 million residents. 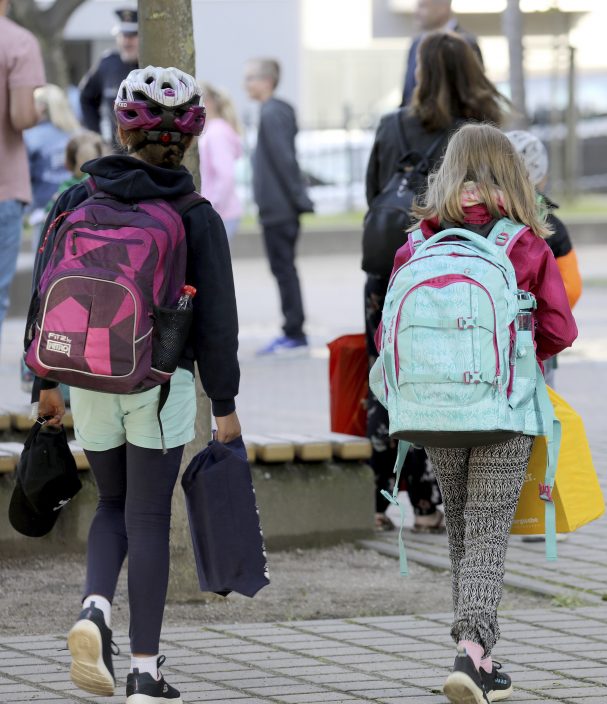 Children make their way to school by their parents in Rostock, Germany Monday, Aug. 3, 2020 as Mecklenburg-Western Pomerania is the first federal state to resume regular school operations throughout the state. About 150,000 students are expected to attend their schools. (Bernd Wuestneckdpa via AP)

In Hamburg, where students return on Thursday, and Berlin, where they return next week, state governments have ordered masks be worn. Mecklenburg-Western Pomerania's education minister, Bettina Martin, has said she was working on a proposal to require them as well.

“I think it's good that we play it safe,” she said.

Since schools largely closed down due to the pandemic in mid-March, parents, teachers and children across the country have been eyeing the reopenings warily as states have grappled with the challenge of how to safely resume in-class learning.

At the height of the pandemic, schools across the country offered some exams and limited classes, combining that with distance learning. A very limited, piecemeal return to classrooms started toward the end of the last school year, but officials are keen to return to something closer to normal now.

As the students in Mecklenburg-Western Pomerania return from summer holidays, children are being divided into fixed groups for their classes to compartmentalize any possible outbreak, but are allowed to go mask-free and don't have to respect distancing guidelines, the dpa news agency reported.

Many children voluntarily wore masks on Monday as school began, and several schools implemented their own mask rules and handed them out to children who forgot them.

“In these hallways, compulsory masks are the rule,” the head teacher of the Reutershagen high school in Rostock, Jan Bonin, told dpa.

Even in states where masks have been made obligatory, like Berlin, Bavaria and Baden-Wuerttemberg, many have questioned how effective they will be as protection. Even though they will be required in hallways, they are not required in classrooms where the plan is to keep students a safe distance apart.

Administrators have also acknowledged that once the students are off school property, there is little they can do to enforce distancing and hygiene rules.

Germany is widely seen as a success story in its efforts to stanch the spread of the pandemic, with a total of about 210,000 cases with some 9,150 deaths, according to the country's disease control center, the Robert Koch Institute.

From a peak of more than 6,000 new daily cases reported in March, the daily figure was brought down to the low hundreds by mid-May, even as the country started reopening shops, restaurants and other parts of the economy. It remains relatively low but has started to tick back up recently, raising concerns that people have grown lax in their precautions.

“Tourism, restaurants and even fitness studios have now long been open without any significant problems,” Martin told Die Welt newspaper. “It's high time to push children's interests to the front.”

US, Australia, India ministers to meet in Japan next we ...