Vietnam has confirmed 21 more coronavirus cases linked to three hospitals in the central city of Da Nang, the health ministry said Monday. The country, which had lifted many restrictions after more than three months with no local infections, now has 196 cases in the new outbreak.

Fifteen of the new cases were in Da Nang, Vietnam's most popular beach destination, while six others were in neighboring Quang Nam province. All were patients or relatives of patients at the three hospitals in Da Nang, where the outbreak emerged, the ministry said.

Vietnam had been widely praised for its success in controlling its initial outbreak of the coronavirus, with no reported cases of local transmission for 99 days. But nine days ago, a case was confirmed at a Da Nang hospital. 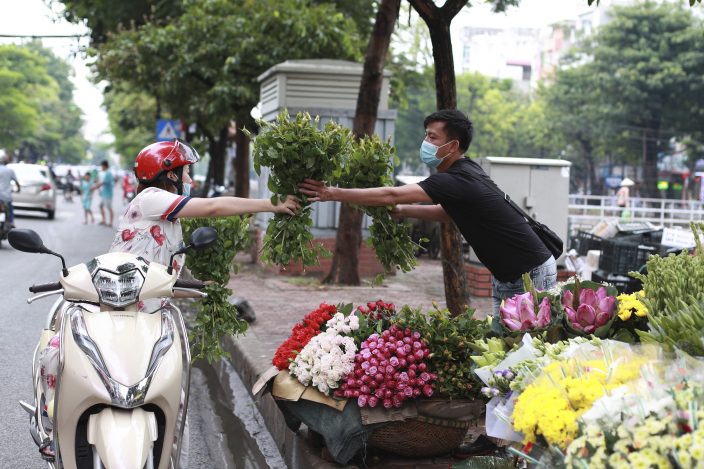 A seller hands flowers to a customer, both wearing face masks, in Hanoi, Vietnam, Monday, Aug. 3, 2020. Vietnam has tightened travel and social restrictions after the country's death toll of COVID-19 to six. (AP PhotoHau Dinh)

The virus has now spread to six parts of the country, including three large cities, forcing authorities to reimpose virus restrictions. Officials have confirmed three deaths, the country's first from the virus.

The health ministry said 40% of the new cases show no symptoms.

“The asymptomatic cases are a danger for transmission in the community,” acting health minister Nguyen Thanh Long said. “Therefore, we must not overlook any suspected cases.”

On Monday, the army deployed a mobile lab truck to Da Nang to increase testing capacity in the city.

During a government meeting on Monday, Prime Minister Nguyen Xuan Phuc urged all provinces to control the outbreak in early August, calling it a “crucial time.”

“Each family must be a fortress and each citizen must be a warrior to keep the outbreak from spreading widely in the community,” Phuc said.

He urged residents to be vigilant to help control the virus and ensure health security. But he said there shouldn't be a rush to close businesses because health should to be balanced with economic security.

Vietnam locks down its 3rd-largest city as virus cases grow