Cronenworth's hit gave ace Chris Paddack (2-0) his first career win against the Dodgers. Cronenworth also made several nice plays at first base, where the rookie made his fifth start. First baseman Eric Hosmer is on the injured list with a stomach ailment. 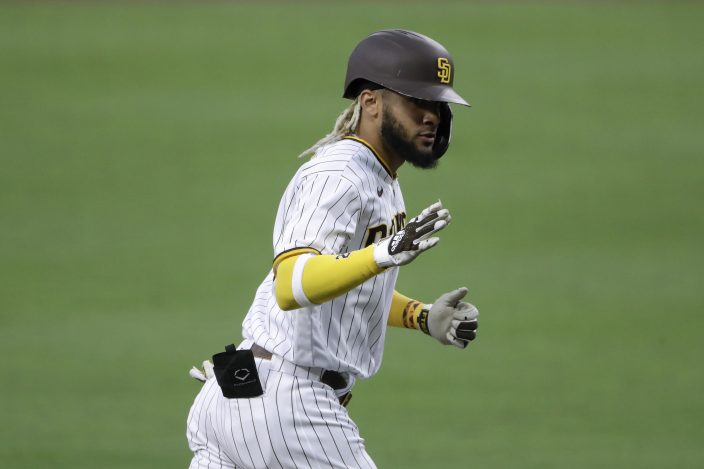 Paddack allowed three runs and five hits in six innings, struck out five and walked none. Paddack's previous three starts against Los Angeles were at Dodger Stadium last year as a rookie. He went 0-1 in those games.

Buehler gave up three home runs for just the second time in his career. He left after five innings with the score tied at 3 after yielding three hits while striking out three and walking three.

Brusdar Graterol (0-2) relieved Buehler to open the sixth and permitted a single by Manny Machado, who advanced on Tommy Pham's grounder. Cronenworth singled to bring in Machado for a 4-3 lead. Cronenworth later scored on Austin Hedges' two-out single, the first time the catcher reached safely this season. 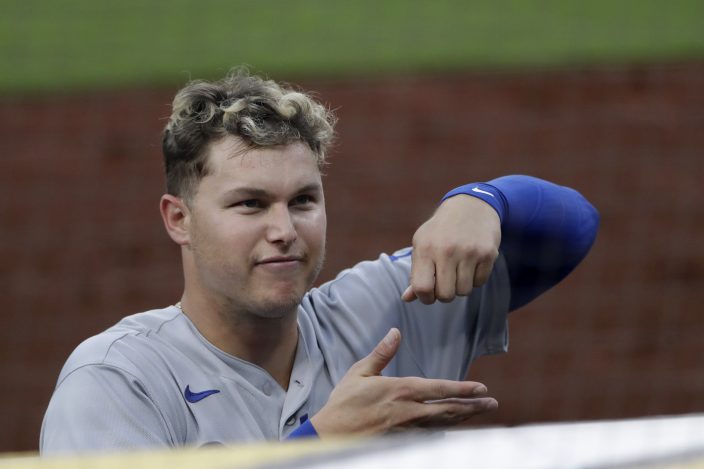 Cronenworth made his major league debut on July 26. He was obtained with Pham in an offseason trade with Tampa Bay that sent Hunter Renfroe to the Rays.

Reigning NL MVP Cody Bellinger homered off Kirby Yates leading off the ninth before the closer struck out three batters for his first save this year. Yates led the majors with 41 saves last season.

It was the first meeting of the year between the seven-time defending NL West champion Dodgers and the Padres, who think they're built for success in the pandemic-shortened 60-game season. The Dodgers went 13-6 against the Padres last year. 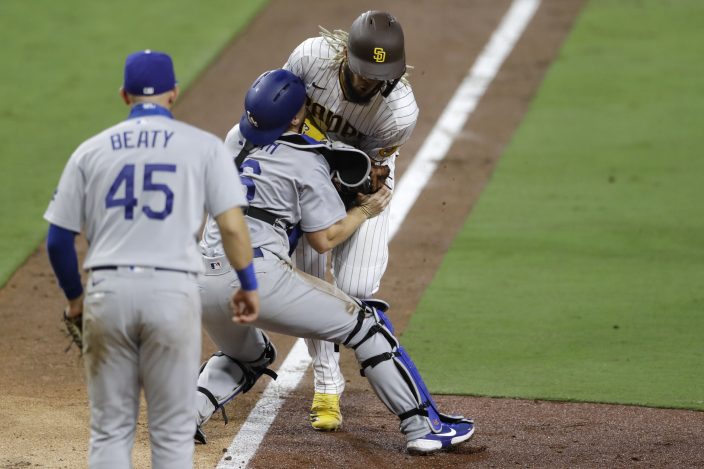 San Diego Padres' Fernando Tatis Jr., right, collides with Los Angeles Dodgers catcher Will Smith, center, as he is tagged out attempting to score from third base on a line out by Manny Machado during the seventh inning of a baseball game Monday, Aug. 3, 2020, in San Diego. Los Angeles Dodgers first baseman Matt Beaty (45) looks on at left. (AP PhotoGregory Bull)

Joc Pederson homered to left-center on Paddack's first pitch, his first of the season and his 21st career leadoff homer.

The Dodgers regained the lead on Will Smith's two-run double to right-center with one out in the fifth. Corey Seager was aboard on a leadoff double and Matt Beaty on a single.

San Diego Padres' Fernando Tatis Jr. reacts after being tagged out while trying to score from third base off a line out by Manny Machado during the seventh inning of a baseball game against the Los Angeles Dodgers, Monday, Aug. 3, 2020, in San Diego. (AP PhotoGregory Bull)

Tatis tied it with a shot to right with two outs in the fifth, his third. Tatis hit a tying solo homer in the ninth inning at Colorado on Friday night. Pham later hit a three-run homer and the Padres won 8-7.

Dodgers: OF Mookie Betts was out of the lineup for the first time this season with a finger injury sustained during an at-bat Sunday at Arizona. Manager Dave Roberts said the swelling in the finger was still substantial.

Dodgers: RHP Dustin May (0-0, 2.35 ERA) makes his third start of the season. He is 0-2 with a 3.46 ERA and nine strikeouts in four career appearances against San Diego.