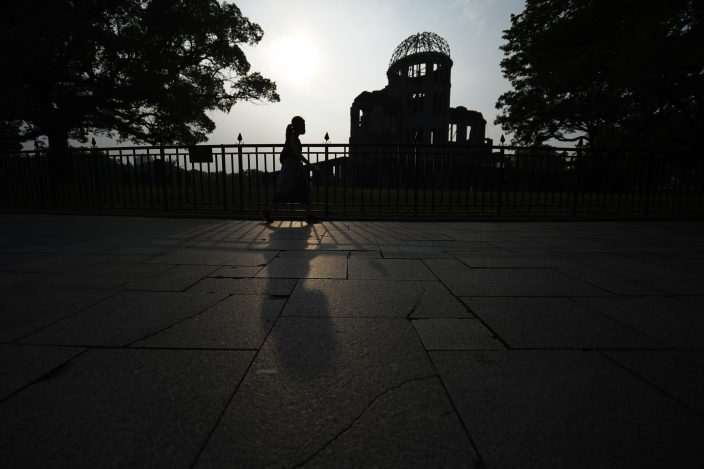 The Atomic Bomb Dome is seen at dusk in Hiroshima, western Japan, Monday, Aug. 3, 2020. The city of Hiroshima on Thursday, Aug. 6 marks the 75th anniversary of the U.S. atomic bombing. (AP PhotoEugene Hoshiko)

VIRUS OUTBREAK-EVICTIONS — Housing advocates fear that they could see a wave of evictions in the coming months, as states end moratoriums put in place during the coronavirus pandemic. By Regina Garcia Cano and Michael Casey. SENT: 1,230 words, photo. 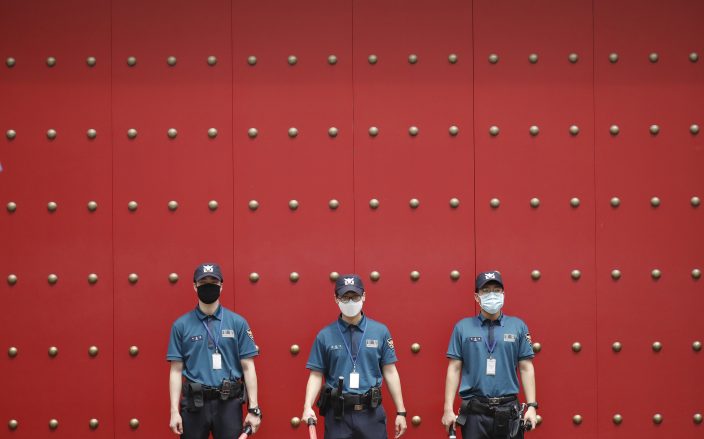 VIRUS OUTBREAK-NURSING HOMES — The Trump administration’s plan to provide every nursing home with a fast COVID-19 testing machine comes with an asterisk: The government won’t supply enough test kits to check staff and residents beyond an initial couple of rounds. By Ricardo Alonso-Zaldivar. SENT: 860 words, photo.

AMBASSADORS BEHAVING BADLY — In Iceland, the U.S. ambassador wants guards who pack heat. In Britain, the U.S. ambassador is accused of pushing business deals for the president’s resorts. And, in France, Germany, the Netherlands, Canada and South Africa, among others, U.S. envoys have and are pushing the limits, infuriating career diplomats who work under them and irritating host governments. By Egill Bjarnson and Matthew Lee. SENT: 1,000 words, photos.

JAPAN-HIROSHIMA-LAST-WITNESSES — For nearly 70 years, until he turned 85, Lee Jong-keun hid his past as an atomic bomb survivor, fearful of the widespread discrimination against blast victims that has long persisted in Japan. But Lee, 92, is now part of a fast-dwindling group of survivors that feels a growing urgency to tell their stories. These last witnesses to what happened 75 years ago this Thursday want to reach a younger generation that they feel is losing sight of the horror. By Mari Yamaguchi. SENT: 1,180 words, photos. 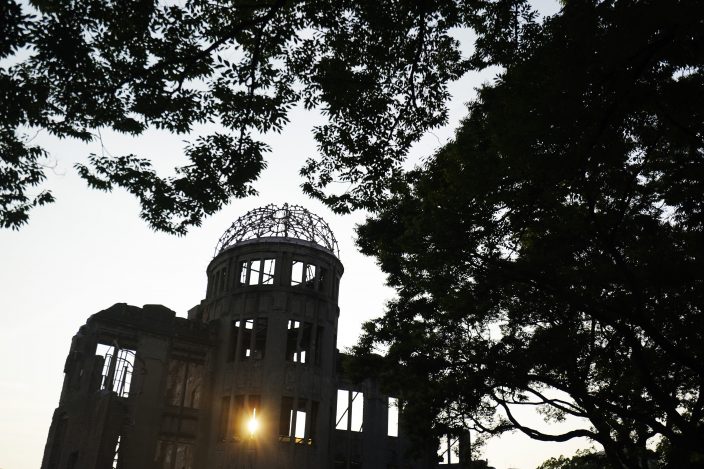 The Atomic Bomb Dome is seen at dusk in Hiroshima, western Japan, Sunday, Aug. 2, 2020. The city of Hiroshima on Thursday marks the 75th anniversary of the U.S. atomic bombing. (AP PhotoEugene Hoshiko)

IRAQ-ELECTRICITY-WOES — In Iraq’s oil-rich south, the scorching summer months pose painful new choices in the age of the coronavirus: stay at home in the sweltering heat with electricity cut off for hours, or go out and risk the virus. By Samya Kullab and Nabil Al-Jurani. SENT: 1,110 words, photos. 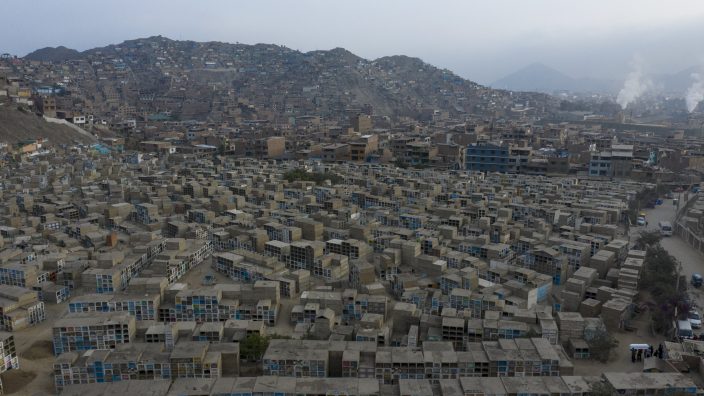 People carry the coffin of a loved one during a funeral in Los Sauces cemetery, amid the new coronavirus pandemic, on the outskirts of Lima, Peru, Monday, Aug.3, 2020. (AP PhotoRodrigo Abd)

VIRUS OUTBREAK — Putting your child on the bus for the first day of school is always a leap of faith for a parent. Now, on top of the usual worries about youngsters adjusting to new teachers and classmates, there’s COVID-19. SENT: 1,350 words, photos, video. With VIRUS-OUTBREAK-THE-LATEST.

VIRUS OUTBREAK-CONGRESS — Negotiators on a huge coronavirus relief bill report slight progress after talks resume in the Capitol, with issues like food for the poor and aid to schools struggling to reopen safely assuming a higher profile in the talks. SENT: 820 words, photos. 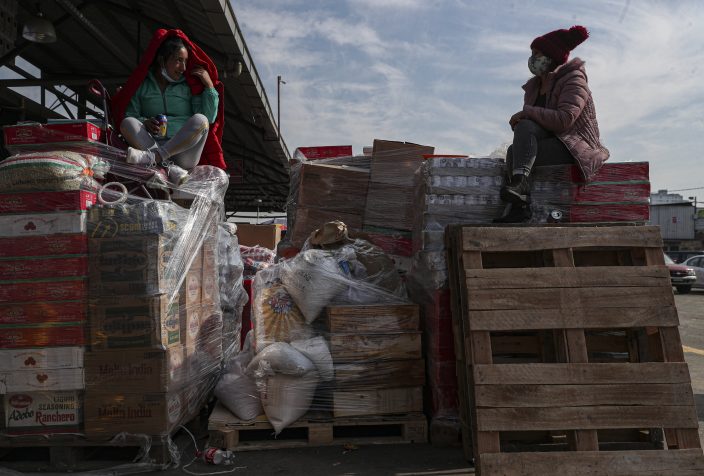 Merchants wear masks to curb the spread of the new coronavirus while they chat in La Vega market in Santiago, Chile, Monday, Aug. 3, 2020. (AP PhotoEsteban Felix)

VIRUS-OUTBREAK-EDUCATION-IMPACT — U.N. Secretary-General Antonio Guterres says the coronavirus pandemic has led to the largest disruption of education in history, with schools closed in more than 160 countries in mid-July, affecting over 1 billion students. SENT: 640 words. 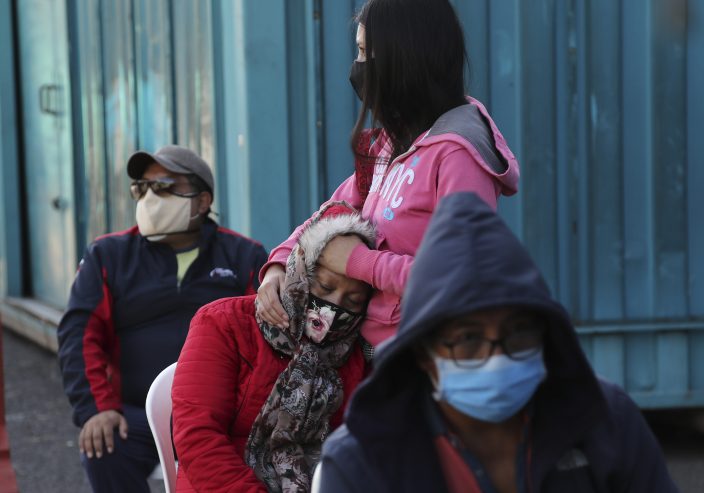 People line up to be tested for COVID-19 at the Unidad Educativa Quitumbe school that has been enabled by the as a triage unit and to help hospitals that are operating at the limit of their capacity during the new coronavirus pandemic, in Quito, Ecuador, Monday, Aug. 3, 2020. (AP PhotoDolores Ochoa) 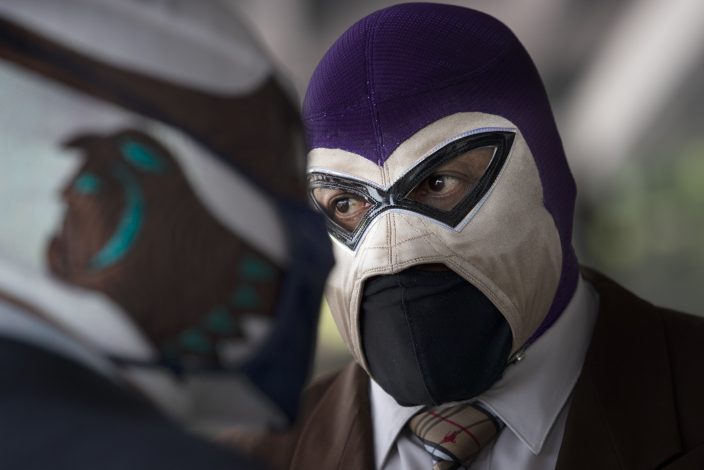 "El Fantasma," right, President of the Mexico City Lucha Libre Commission and fellow wrestler Canek chat before handing out food parcels donated by a local supermarket to other wrestlers who are facing hard times in Mexico City, Monday, August 3, 2020. The wrestlers have not been able to work for months because of the COVID-19 pandemic that has closed down the venues where they perform. (AP PhotoMarco Ugarte) 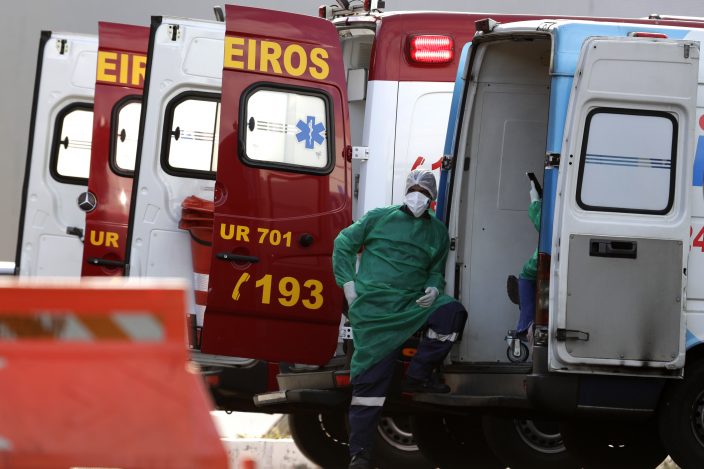 Health workers take a break near their ambulance after moving a patient suspected of being infected with COVID-19 to the HRAN Hospital, specialized in the care of new coronavirus cases, in Brasilia, Brazil, Monday, Aug. 3, 2020. (AP PhotoEraldo Peres)

ELECTION 2020-VP-GENDER POLITICS — The debate over Joe Biden’s running mate has recently ticked through a familiar list of stereotypes about women in politics. SENT: 920 words, photos. With ELECTION 2020-VP-VETTING COMMITTEE — Who’s who on the committee vetting Biden’s possible VPs. 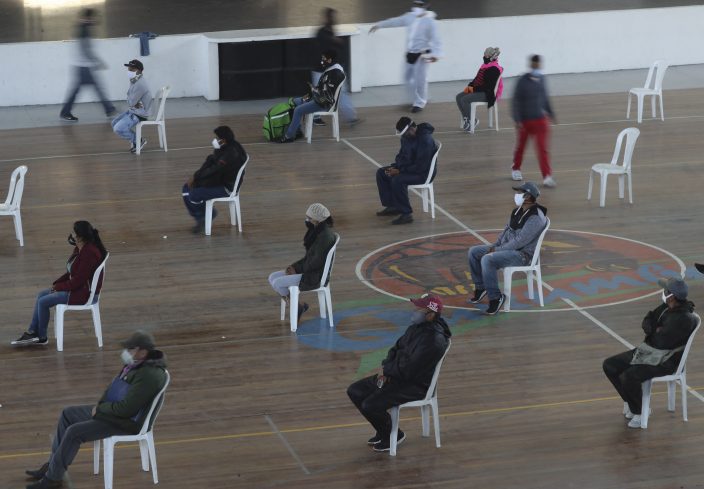 People wait to be tested for COVID-19 in the Gym of the Unidad Educativa Quitumbe school, which has been enabled by the municipality as a triage unit and to help hospitals that are operating at the limit of their capacity during the new coronavirus pandemic in Quito, Ecuador, Monday, Aug. 3, 2020. (AP PhotoDolores Ochoa)

ELECTION 2020-MICHIGAN-HOUSE 13 — “Squad” member Rashida Tlaib is trying to fend off a serious challenge for her House seat in Michigan’s primary, in a rematch with the woman she narrowly defeated two years ago. SENT: 300 words, photo. 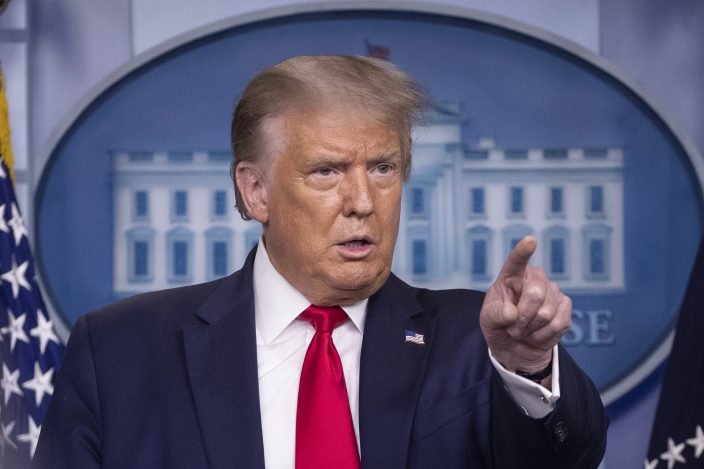 President Donald Trump points to a question as he speaks during a briefing with reporters in the James Brady Press Briefing Room of the White House, Monday, Aug. 3, 2020, in Washington.(AP PhotoAlex Brandon) 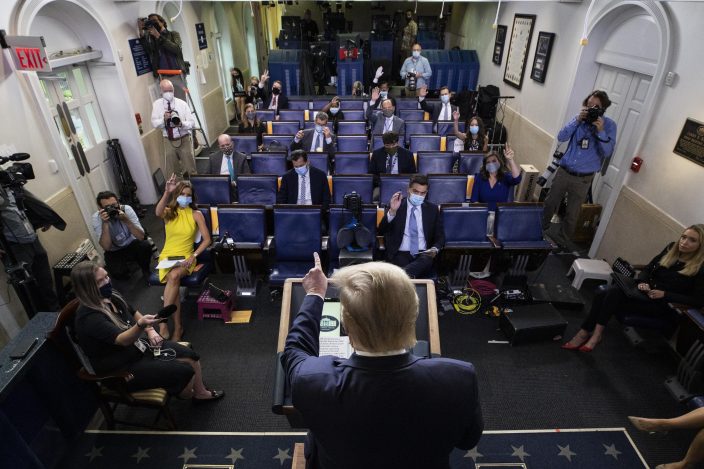 KASHMIR-DEMOGRAPHIC FEARS — A year after India ended disputed Kashmir’s semi-autonomous status and downgraded it to a federally governed territory, authorities have begun issuing residency and land ownership rights to outsiders for the first time in almost a century. SENT: 1,160 words, photos. With KASHMIR-SECURITY CLAMPDOWN — Curfew in parts of Kashmir ahead of revocation anniversary.

SRI LANKA-ELECTIONS — Sri Lanka’s powerful, popular Rajapaksa brothers are likely to get strong support in parliamentary elections that could add to their family political dynasty and their ability to amend the constitution – a prospect raising fears of weakening government institutions and the rule of law. SENT: 840 words, photos. With SRI-LANKA-ELECTION-GLANCE.

GYM-DOCTOR-SEXUAL-ASSAULT-COACH — A former Michigan State University head gymnastics coach is scheduled to be sentenced for lying to police during an investigation into ex-Olympic and university doctor Larry Nassar. SENT: 450 words, photo.

CALIFORNIA WILDFIRES — A wildfire in mountains east of Los Angeles that has forced thousands of people from their homes was sparked by a malfunctioning diesel vehicle, fire officials say. SENT: 570 words, photos.

RARE WILDFLOWER-NEVADA LITHIUM MINE — A botanist hired by a company planning to mine one of the most promising deposits of lithium in the world believes a rare desert wildflower at the Nevada site should be protected under the Endangered Species Act, a move that could jeopardize the project, the AP has learned. By Scott Sonner. SENT: 950 words, photos.

MEDIA-ERODING-TRUST — The distrust many Americans feel toward the news media, caught up like much of the nation’s problems in the partisan divide, only seems to be getting worse. By Media Writer David Bauder. SENT: 510 words.

GOLDEN-GLOBES-REPORTER-LAWSUIT — A Norwegian entertainment reporter sues the Hollywood Foreign Press Association, the organization that gives out the Golden Globe Awards, alleging that it acts as a cartel that stifles competition for its members. By Entertainment Writer Andrew Dalton. SENT: 450 words, photo.

Voters in Romania were casting bal ...