A small but singularly influential group is a driving force for an agreement on a stalled coronavirus relief bill: Endangered Senate GOP incumbents who need to win this fall if Republicans are going to retain control of the majority.

Confronted with a poisonous political environment, vulnerable Senate Republicans are rushing to endorse generous jobless benefits, child care grants, and more than $100 billion to help schools reopen. Several of them are refusing to allow the Senate to adjourn until Washington delivers a deal to their desperate constituents.

Sen. Martha McSally, who has fallen behind in polls in Arizona, is breaking with conservatives to endorse a temporary extension of a $600 per week supplemental benefits. Republicans up for reelection such as John Cornyn of Texas and Lindsey Graham of South Carolina are demanding results before returning home to campaign. And Sen. Susan Collins is in overdrive, backing help for cash-starved states and local governments — and Maine's shipbuilding industry. 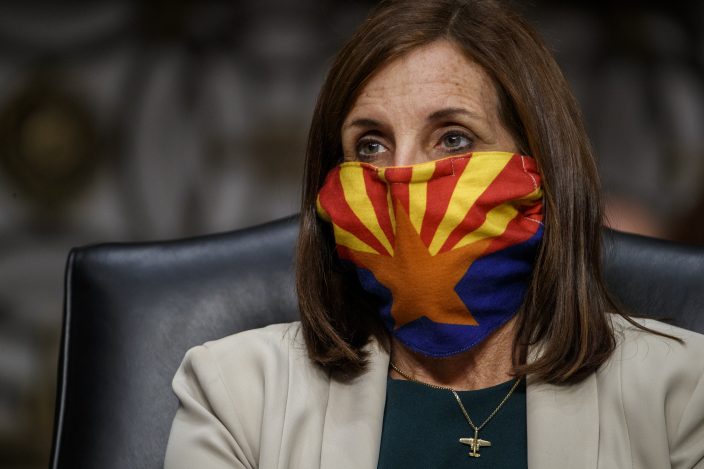 FILE - In this May 6, 2020, file photo, Sen. Martha McSally, R-Ariz., listens during a hearing on Capitol Hill in Washington. Arizona will be in the national spotlight in November as a presidential battleground and the home of one of the most closely watched Senate contests in the country. But Tuesday's primary on Aug. 4 features few big-ticket contests. McSally faces a challenge from businessman Daniel McCarthy, who is running to her right with an anti-government message and an appeal to voters who think the response to the pandemic is infringing on individual freedoms. (Shawn ThewPool via AP, File)

The opinions of senators up for reelection are of more consequence to Senate Majority Leader Mitch McConnell than those held by conservatives like Ted Cruz, R-Texas, and Pat Toomey, R-Pa., who are broadcasting their opposition to the emerging legislation as costly and ineffective. As other Republicans gripe that they're going to have to swallow a deal brokered by House Speaker Nancy Pelosi, D-Calif., the vulnerable Republicans are craving just such a bipartisan result.

“Maybe eight Republicans who are up in tough states have a bigger interest in getting this COVID-19 bill done," said Sen. Rob Portman, R-Ohio. “I think that's accurate."

Republican strategists, grappling with a political environment for their party that has worsened over the summer, said it's imperative for GOP lawmakers to be able to head back to their states and districts with a deal in hand to show voters they are taking the pandemic and the economic fallout seriously.

“GOP Senate candidates need a deal, a good deal ... so they can get home and campaign on helping small businesses get up and moving again,” said Scott Reed, the chief political strategist at the U.S. Chamber of Commerce.

Republican operative Corry Bliss said it was crucial for incumbents facing tough re-election fights to “have wins” to highlight through the fall.

“This is the most important issue facing the country right now,” Bliss said. “There’s no better message for Congress to deliver heading into the election than a big bipartisan victory to help families and small businesses get through this difficult time.”

Republicans control the Senate by a 53-47 margin, meaning Democrats must gain at least three seats to capture Senate control. But Republicans are defending 25 of the 38 seats in play, and are on the defensive even in traditionally red states due to Trump’s deteriorating standings in polls.

Meanwhile, in blue and purple states like Iowa, Colorado, and Maine, GOP incumbents are lining up to break with party orthodoxy on issues like child care, unemployment benefits, and aid to cash-starved state and local governments.

In Colorado, Sen. Cory Gardner recently pushed for more virus relief after an appearance with Ivanka Trump at a child care facility in the Denver suburbs. “It needs to get done now,” he told reporters.

His opponent, Democrat John Hickenlooper, has been hammering Gardner over the GOP's decision to “pause” the coronavirus negotiations for most of the summer. On Tuesday, his campaign held a virtual press conference to press for more relief. “We’ve seen Sen. Gardner stay silent while Mitch McConnell and President Trump refuse to help millions of Americans,” Hickenlooper said.

In South Carolina, Graham's opponent has called out what he has characterized as the Republican’s flippant attitude toward real-world concerns over lost wages and unemployment. Jaime Harrison has said Graham is “leading the charge” to cut additional unemployment relief, referring to Graham’s April comment that Congress would extend the current benefits past July “over our dead bodies.”

Graham is now offering a jobless benefit proposal that is more generous than other GOP proposals.

Cornyn helped start a bandwagon of senators who are demanding the Senate stay at work in Washington until a coronavirus bill is passed. Voters expect a deal — including renewed unemployment benefits that have helped millions of people avert a descent into poverty — and returning home to campaign without one in hand could be a political disaster. With progress coming slowly in the talks, GOP leaders said the Senate will be extending its session into next week and possibly longer.

Back home, Cornyn is facing the first serious reelection challenge of his 18 years in the Senate as Trump’s sagging approval and Texas’ rapidly changing suburbs has the GOP nervous about their grip on America’s biggest red state. His opponent, Democrat M.J. Hegar, has circulated interviews of Cornyn earlier calling generous jobless benefits a mistake since they encourage people not to work and saying in June that the benefit would not be reinstated.

At a closed-door GOP lunch last month, conservative Sen. Tom Cotton, R-Ark., urged a freer-spending approach to the legislation that could help endangered colleagues keep their seats — and allow everyone else to hold onto their gavels.

It's difficult to overstate the stakes. Republicans are in their sixth year holding the Senate, and that majority could be the only obstacle to all-Democratic control of Washington next year if Joe Biden, the presumptive Democratic nominee, defeats Trump in November.

Democrats controlling the chamber could rubber-stamp Biden's Cabinet and judicial picks, if he wins, including likely Supreme Court vacancies. Even a narrow Democratic majority could reverse the GOP's 2017 tax cuts — and that's before the party considers eliminating the legislative filibuster that has been the defining characteristic of the chamber for decades.

“This is the most important thing we need to be doing,” Cornyn said Tuesday.