The C’s have it: Crosby and Connor, that is.

With each of their teams facing 1-0 deficits, and both to their respective conference’s 12th- and last-seeded opponents no less, Crosby and McDavid provided much-needed sparks to even their best-of-five preliminary round elimination series, which resume Wednesday. 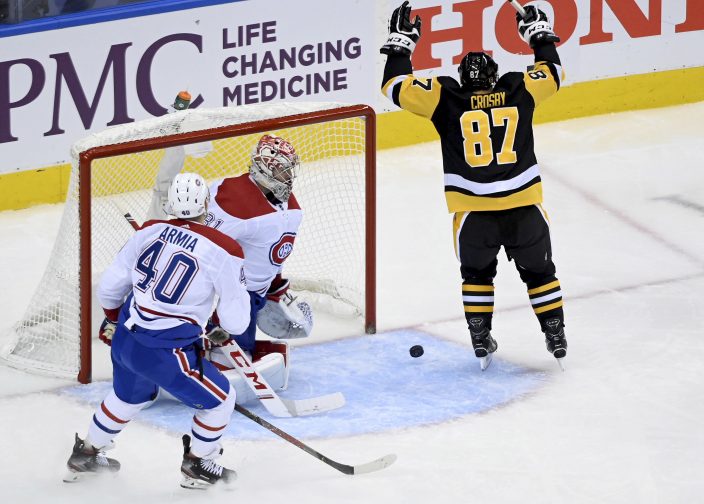 First, it was Crosby giving the Penguins a lift by beating Carey Price on a partial break to open the scoring in a 3-1 win over the Montreal Canadiens in Toronto on Monday night.

A few hours later in the league’s other playoff hub city, Edmonton, Alberta, McDavid put on an eye-popping display — even by his standards — with his first three-goal playoff performance in a 6-3 win over Chicago.

“I’ve seen it for years with Sidney Crosby. I mean, he dictates the work ethic and pace of the game. Last night Connor was the guy to do that for us,” Oilers coach Dave Tippett said Tuesday. 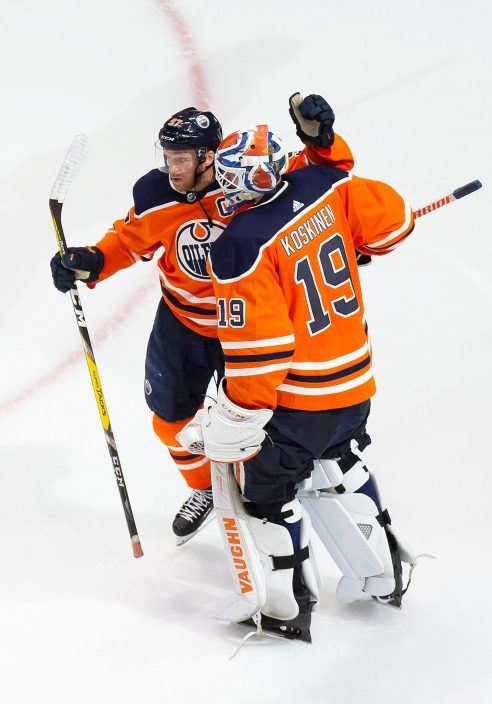 “Connor’s not a big 'Rah-rah’ guy, but he inspires players by how he plays," he added. "And last night, he certainly led the way for us, and the rest of our team followed suit.”

“When Sid is leading your team, you know you’re in good hands,” Letang said. “If it was not the case, right now we would be in trouble.”

The Penguins and the Oilers aren’t out of trouble just yet, given how only 15 of 83 NHL teams which lost Game 1 of a best-of-five series have gone on to advance.

Both teams are back in prime-time, with the Penguins facing Montreal (8 p.m. EDT, NBCSN), and Edmonton facing Chicago (10:30, NBCSN), while breathing just a little easier.

“He comes out and he's flying like that the first couple of shifts, you want to follow right along,” Oilers forward Ryan Nugent-Hopkins said of McDavid. “We know he can do that at any given moment. And for him to do that in a huge game like last night, it raises your energy level.”

Florida is in jeopardy of being one-and-done for its fifth consecutive playoff appearance. The Panthers have advanced past the first round just once, in 1996, when they reached the Stanley Cup Final before being swept by Colorado.

Discipline remains an issue for Florida. The Islanders overcame a pair of one-goal deficits and converted two of seven power-play opportunities in a 4-2 win Tuesday.

At least the 10th-seeded Panthers won’t have time to dwell on the loss by playing on consecutive days, defenseman Keith Yandle.

“Probably best case for us playing back to back, not sitting on this one too long,”Yandle said. “Just getting back to the hotel, get a meal and get to bed and come back and do it again. It’s one of those games where you want to go out and prove yourself.”

The sixth-seeded Predators bounced back from a 4-3 series-opening loss by scoring the first four goals in a 4-2 win Tuesday.

Nashville blocked 21 shots, and Juuse Saros faced only 26 shots — 11 fewer than Game 1 — before giving up two goals in the final minute.

“When we had the puck, guys were getting a little bit antsy and started pounding shots into guys’ pads,” Coyotes coach Rick Tocchet said. “Sure we’re disappointed in some things that happened, but overall, I don’t think we gave them a lot of chances.”

Also resuming is the round-robin portion of the preliminary round, featuring each conference’s top four teams playing for first-round seeding.

In the East, the Tampa Bay Lightning, coming of a 3-2 shootout win over Washington, face the Presidents’ Trophy champion Boston Bruins (4 p.m., NBCSN). The Bruins came out flat and were minus starting goalie and Vezina Trophy finalist Tuukka Rask in a 4-1 loss to Philadelphia on Sunday.

In the West, the Colorado Avalanche, who opened with a 2-1 win over St. Louis, face the Dallas Stars (6:30 p.m., NHL Network). Dallas opened by squandering a 3-1 lead entering the third period in a 6-3 loss to Vegas.

AP Sports Writers Will Graves in Pittsburgh and John Marshall in Phoenix and The Canadian Press contributed.

Islanders, Golden Knights to try again to close out series

Lightning looking for better start in Game 2 against Bruins