Shane Bieber overcame two solo home runs to pitch into the eighth inning, Franmil Reyes hit a tiebreaking, two-run homer and the Cleveland Indians snapped a four-game skid with a 4-2 win over the Cincinnati Reds on Tuesday night.

Reyes capped the Indians' comeback from a 2-0 deficit with his first homer of the season after hitting 37 with San Diego and Cleveland last year. His shot in the eighth inning to deep right-center field against Nate Jones (0-1) followed a leadoff walk by Carlos Santana.

The Indians played their third consecutive game without manager Terry Francona, who continues to undergo tests in Cleveland for a gastrointestinal condition. There is no timetable for his return. Sandy Alomar, normally the team’s first base and catching coach, is filling in for Francona. 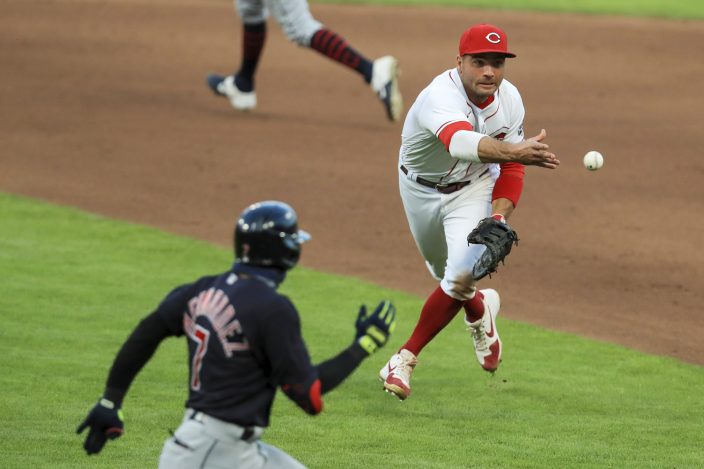 The Indians scrounged just three hits but capitalized on six walks and an error.

They pushed across an unearned run in the seventh against Pedro Strop after Reyes reached on shortstop Freddy Galvis’s error to start the inning. Reyes scored two outs later on Oscar Mercado’s walk.

César Hernández beat out an infield chopper to first baseman Joey Votto to drive in the tying run. 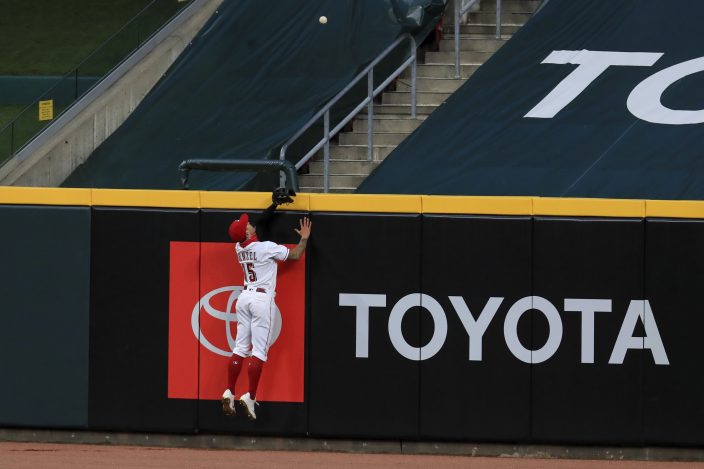 Cincinnati Reds' Nick Senzel (15) leaps at the wall as he is unable to catch the two-run home run hit by Cleveland Indians' Franmil Reyes (32) in the eighth inning during a baseball game at in Cincinnati, Tuesday, Aug. 4, 2020. (AP PhotoAaron Doster)

Bieber (3-0) allowed a season-high five hits and two runs in 7 2/3 innings. He walked two with eight strikeouts. James Karinchak struck out Nick Castellanos to finish the eighth, and Brad Hand pitched the ninth for his third save.

Reds starter Tyler Mahle allowed one hit and two walks with six strikeouts in six innings. He also hit Francisco Lindor with a pitch before retiring the last 10 batters he faced.

Bieber’s season-opening streak of 14 consecutive scoreless innings over two games lasted two batters into his 15th frame before Castellanos' drive glanced off the upper part of the black batter’s eye in center field. The homer, Castellanos’s fourth in the last three days, extended his season-opening hitting streak to 11 games. 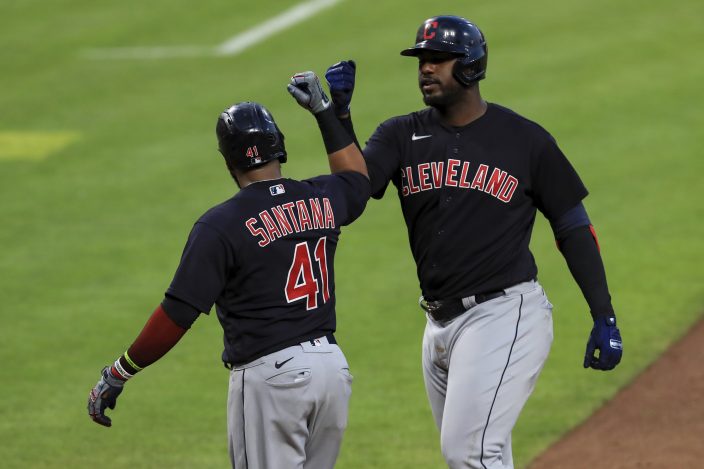 Eugenio Suarez, who set the single-season record for home runs by a Venezuela native with 49 last season, powered his first of 2020 to center field on a 1-2 pitch with one out in the fourth inning.

Indians: OF Tyler Naquin continues to make progress in his recovery from a hairline fracture of his right big toe, but his return isn’t “likely in the next couple of days,” team president Chris Antonelli said Tuesday.

Reds: 2B Mike Moustakas left the game after five innings with a bruised left quad. ... CF Nick Senzel returned to the starting lineup after being scratched from Monday’s original starting lineup with a sprained left ring finger. He was hurt sliding into second base on Sunday in Detroit.

Indians: The Twins roughed up RHP Mike Clevinger (0-1) for six hits and four runs with five walks over four innings in a 4-1 loss on Friday.

Reds: RHP Luis Castillo (0-1) gave up eight hits and five runs in six innings of a 7-2 loss at Detroit on Friday.