Mike Trout remains skeptical about the wisdom of completing the full baseball season amid the coronavirus outbreak, and the Los Angeles Angels' three-time AL MVP would like to see the addition of daily testing to the sport's safety measures.

Trout spoke Tuesday after rejoining the Angels in Seattle following the birth of his first child. He missed four games after his wife, Jessica, gave birth to son Beckham Aaron Trout last Thursday.

The sleep-deprived superstar got on the Angels' team plane Monday night with excitement and wariness. Trout was already concerned about the chances of playing safely through the pandemic before the shortened season began, and his growing family has only heightened those concerns. 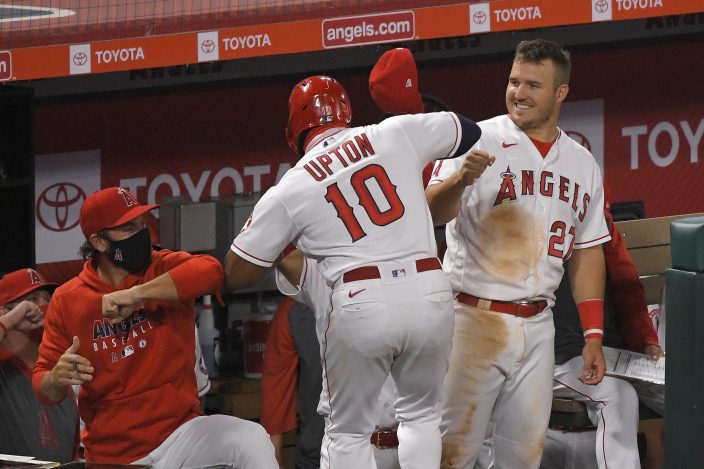 “I think the protocols are good, but it’s just the testing,” Trout said. “I’ve said this since Day One, I think if you don’t have testing every day, it’s going to be tough. You’re always trying to catch up and trying to catch it. You know, if we get tested Friday and we have to wait two days to get the results back, you don’t know what’s going to happen in between. You’ve seen it with the Marlins. You’ve seen it with the Cardinals. It spreads fast."

Trout praised the Angels organization and his teammates for taking the pandemic seriously, noting their stringent adherence to safety rules so far. But he remains wary, particularly with his newborn son at home with his exhausted wife.

“There’s a lot of things flying through my head,” Trout said. “Obviously, Jessica is worried. With this team, the Angels, we’ve been safe, and I feel safe here. Everybody is being accountable, staying in the hotel room, doing the right thing and making the right choices. Until something happens, I feel I feel like it’s been good so far. It’s definitely scary for baseball, because it only takes one person."

Trout was in a lighter mood when describing the new parents' thought process in choosing their baby boy's name. Beckham is simply a name that both parents liked, while the middle name is in honor of Jessica's late brother, Aaron Cox.

“We knew the whole time that his middle name was going to be Aaron,” said Trout, who had talked to his wife and son on FaceTime “about 30 times” already Tuesday.

Baseball fans noticed an added benefit to the Trouts' name choice immediately after its announcement — and so did the parents.

“We kind of looked at each other, like, ‘Man, his initials are B.A.T.,’” Trout said with a laugh. “Just a coincidence.”

Trout rejoined the Angels' lineup on the same day as the major league debut of Jo Adell, the Angels' 21-year-old top prospect. Adell will play right field alongside Trout for the foreseeable future with the Angels, who want him to be an everyday player in the majors.

“I think it's a great opportunity for him because he can just go out and be himself,” Trout said. “There's no fans in the stadium, so you can just go out there, relax and play (your) game. I talked to him last night, and he's really excited to be here. I think everybody is looking forward to it.”

A record surge of new coronavirus ...