Austin Meadows got two hits after missing the first 10 games of the season with the coronavirus and the Tampa Bay Rays stopped their losing streak at five, beating the Boston Red Sox 5-1 on Tuesday night.

Boston lost its fourth in a row, including a three-game sweep at Yankees Stadium over the weekend, and fell to 3-8 overall. Tampa Bay Rays batter Austin Meadows fouls off a pitch from Boston Red Sox starting pitcher Nathan Eovaldi during the first inning of a baseball game Tuesday, Aug. 4, 2020, in St. Petersburg, Fla. Meadows is playing in his first game of the season after recovering from COVID-19. (AP PhotoChris O'Meara)

Meadows hit an an RBI triple in the fifth inning off Nathan Eovaldi (1-1) and scored on Brandon Lowe’s single to put the Rays up 4-1.

Charlie Morton (1-1) allowed one run and five hits and struck out five in 5 2/3 innings. Hunter Renfroe drove in two to help Tampa Bay improve to 5-1 at home — the Rays went 0-5 on their first road trip of the season that ended Sunday. 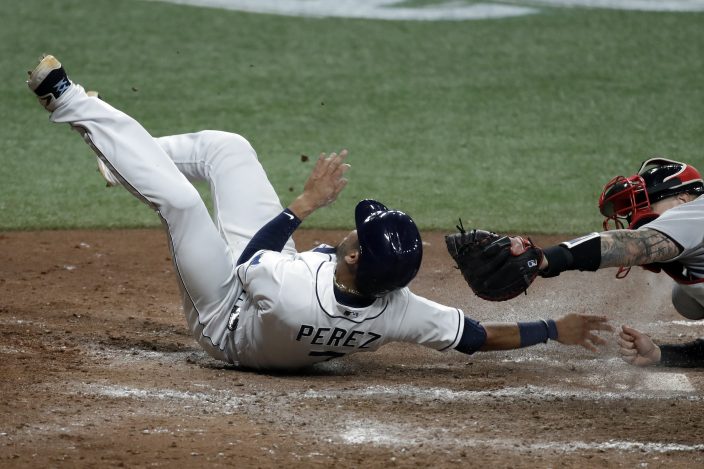 Tampa Bay took a 2-1 lead in the fourth on Renfroe’s two-out, two-run double. It came soon after he hit a ball that may have been playable between home and third that struck an overhanging catwalk in foul territory.

Moreland put the Red Sox up 1-0 on a second-inning homer. He has gone deep seven times in his last 12 games at Tropicana Field.

The Red Sox loaded the base with one out in the ninth against Ryan Thompson before Nick Anderson entered and struck out Jose Peraza and Andrew Benintendi to get his first save.

Boston also threatened in the eighth with one out but Pete Fairbanks worked out of the jam by striking out J.D. Martinez and Xander Bogaerts with two on.

Red Sox CF Jackie Bradley Jr. took away a hit from Lowe with Meadows on first and two outs in the third on a full extension diving catch. The grab had a video review that took about two minutes.

The Rays placed OF Manuel Margot on the bereavement list following the death of his father.