After enduring one final delay in their effort to return from an eight-day, coronavirus-induced hiatus, the Miami Marlins found enough power and pitching within their vastly overhauled roster to beat the Baltimore Orioles 4-0 Tuesday night.

Francisco Cervelli and Jesús Aguilar homered for the Marlins, who had their season halted after 18 players tested positive for COVID-19 following the opening series in Philadelphia.

Miami Marlins' Jesus Aguilar wears a face mask to protect against COVID-19 as he stands at the on deck circle during the first inning of a baseball game against the Baltimore Orioles, Tuesday, Aug. 4, 2020, in Baltimore, Md. (AP PhotoJulio Cortez)

Late Tuesday afternoon, the Marlins were still awaiting the result of further COVID-19 tests, a process that stalled their arrival at Camden Yards and pushed back the scheduled 7:35 p.m. start by 41 minutes.

Once they finally got back on the diamond, the Marlins backed up the assertion of president of baseball operations Michael Hill, who said beforehand: “We expect to win games."

Miami put a whopping 18 players on the injured list and showed up with an equal number of replacements on their 30-man roster — some from their minor league camp, others obtained via trade and a few plucked off the waiver wire. Before manager Don Mattingly wrote up his lineup card, there's a good chance he had to introduce himself to a few of the newcomers. 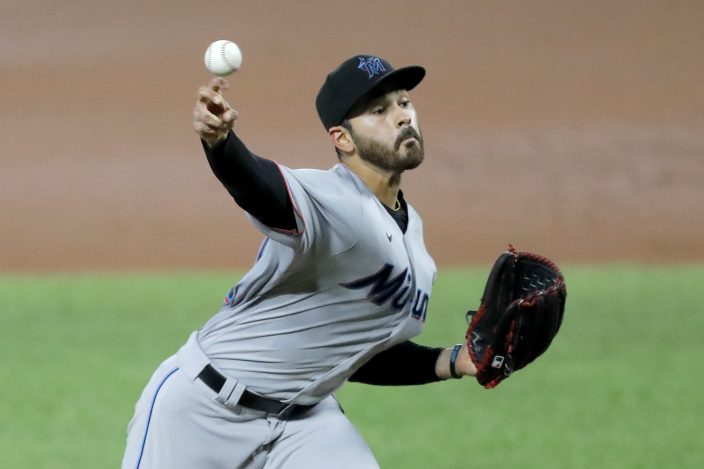 There were plenty of rookies in the dugout, but the only one in the starting lineup was highly touted prospect fielder Monte Harrison, who played center field and went 0 for 3 with three strikeouts in his major league debut.

A matchup between two teams that each lost more than 100 games last year was oddly intriguing because it was Miami’s first game since July 26 and the Orioles were coming off a three-game sweep of Tampa Bay that lifted them into second place in the AL East.

Orioles starter John Means (0-1) allowed one run and two hits in 4 2/3 innings. He retired 13 in a row before Cervelli drove a 3-1 pitch into the left-field seats to end the left-hander's night. 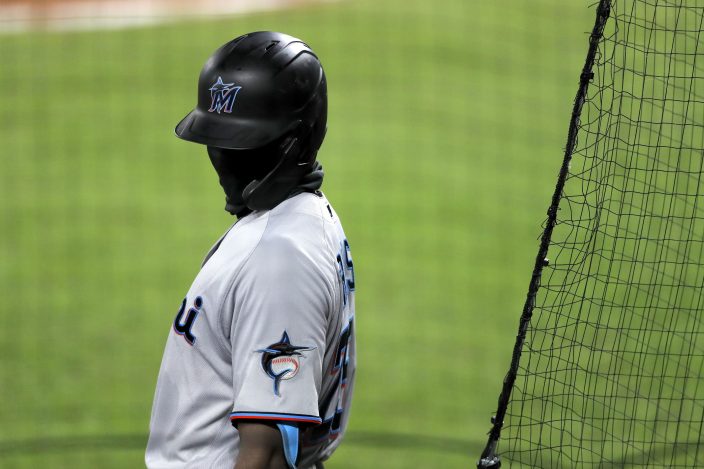 Miami Marlins' Lewis Brinson wears a face mask to protect against COVID-19 while standing at the on deck circle during the sixth inning of a baseball game against the Baltimore Orioles, Tuesday, Aug. 4, 2020, in Baltimore. (AP PhotoJulio Cortez)

Lopez was better, striking out seven and permitting just one runner past first base. The bullpen was also impressive, including Richard Bleier, obtained from the Orioles last week.

After the Marlins went up 3-0 in the sixth, Aguilar hit his third homer in four games. He rounded the bases to cheers from the dugout — a sound the players sorely missed while stuck in a Philadelphia hotel waiting for their season to resume.

After the final out, the Marlins lined up and did “air” high-fives in which they didn’t make contact with their hands. 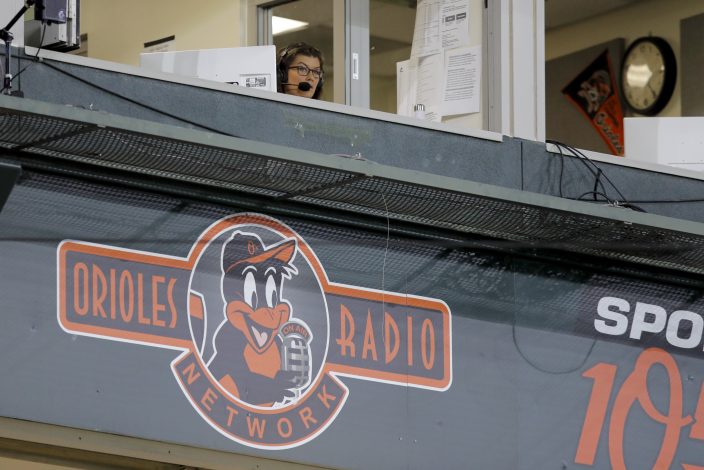 Baltimore Orioles broadcaster Melanie Newman is seen in the booth during the eighth inning of a baseball game between the Orioles and the Miami Marlins, Tuesday, Aug. 4, 2020, in Baltimore. With the broadcast, Newman became the first female broadcaster in Orioles franchise history to call play-by-play for a regular season game. (AP PhotoJulio Cortez)

Because of Miami's precarious situation, the Orioles had two games in Florida postponed and opened at home against the Yankees instead of Marlins on July 29-30. In this anything goes, wacky baseball season, Miami will be the home team for the final two games of this four-game series.

Marlins: Ten pitchers were among the 18 placed on the injured list, including lefty Caleb Smith, who led the team in wins last year with 10. 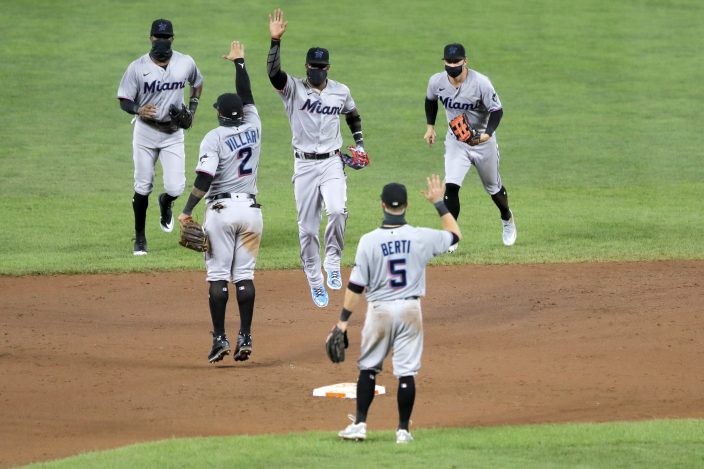 Marlins: RH Elieser Hernández makes his season debut in the opener of a 7-inning doubleheader Wednesday. Mattingly did not announce his starter for the nighcap.