Edinson Volquez (0-1) got into trouble quickly in the ninth inning when he walked two batters and gave up a hit to load the bases with nobody out. 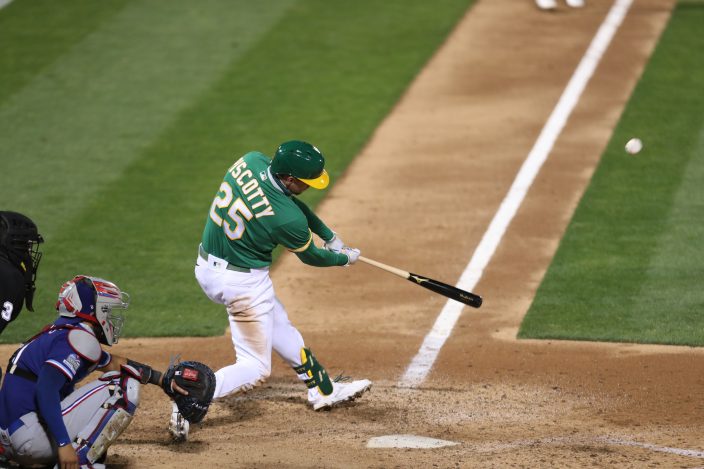 Volquez retired Robbie Grossman on a popup before Piscotty hit a first-pitch drive over the wall in center to match the opening night 10th-inning slam by Matt Olson against the Angels.

Liam Hendriks (1-0) pitched a perfect ninth for the win.

Lynn had allowed just five hits in 18 scoreless innings to begin the season before finally faltering in the seventh against the A’s. Matt Chapman led off the frame with a drive to right-center for his second homer of the season to tie the game at 1. 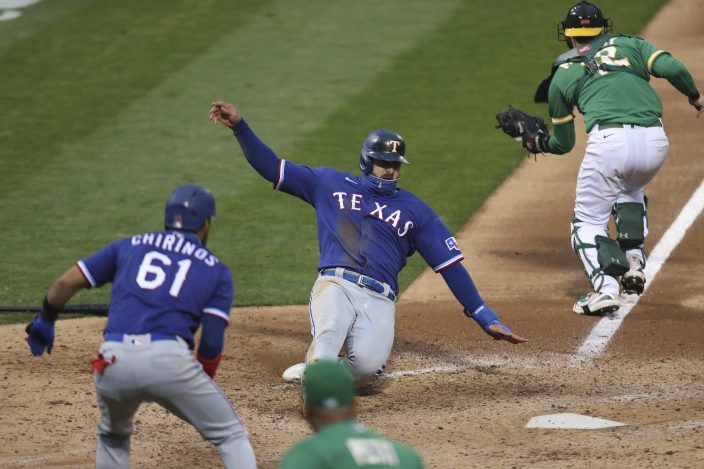 Texas Rangers Joey Gallo scores on a double hit by Todd Frazier against the Oakland Athletics during the fifth inning of a baseball game in Oakland, Calif., Tuesday, Aug. 4, 2020. (AP PhotoJed Jacobsohn)

The Rangers had taken the lead an inning earlier on an RBI double by Todd Frazier.

That helped make it a celebratory night for Luzardo. The 22-year-old lefty was the youngest A’s pitcher to start a game since Brett Anderson in 2010 and lived up to the hype.

He provided a late-season spark last year out of the bullpen but had his quest to start delayed this summer when he tested positive for the coronavirus before the start of camp last month despite dealing with no symptoms and not having any family members or friends who were sick. 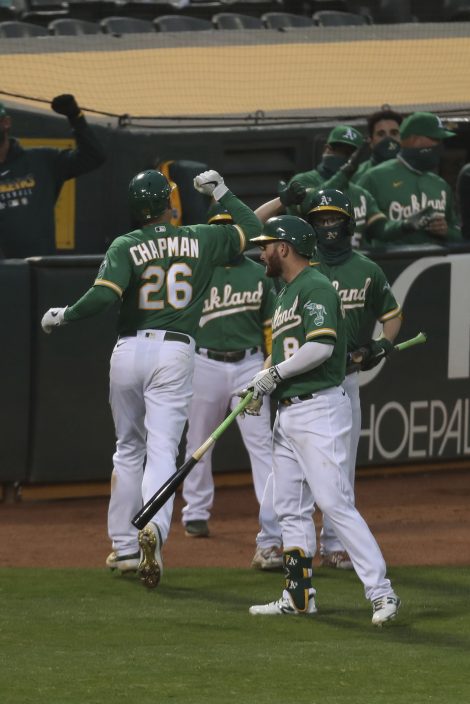 Oakland Athletics Matt Chapman is congratulated after hitting a solo home run against the Texas Rangers during the seventh inning of a baseball game in Oakland, Calif., Tuesday, Aug. 4, 2020. (AP PhotoJed Jacobsohn)

The wait was worth it as he was dazzling in his debut. He overpowered the Rangers at times, striking out Joey Gallo on a 96 mph to end the first.

He also showed off his athleticism in the field with a nifty play on a high-hopper to retire Scott Heineman to end the second. 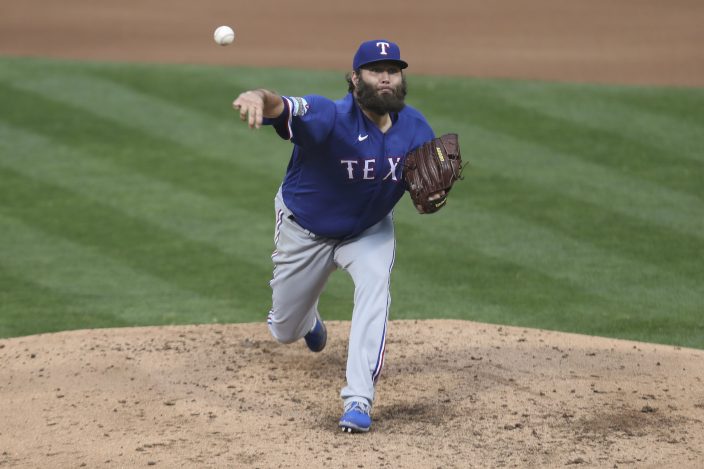 Rangers: LHP Joely Rodriguez was activated off the injured list and 1B Greg Bird was placed on the IL with a strained right calf muscle. ... 2B Rougned Odor remains sidelined after leaving Saturday’s game with tightness in the oblique area on his right side. Manager Chris Woodward said he hopes Odor is back later this week.

Athletics: The A’s placed RHP Jordan Weems on the 10-day injured list retroactive to Aug. 1 with a strained right lat muscle and recalled RHP James Kaprielian from the club’s San Jose alternate site. Manager Bob Melvin said he hopes Weems will be back as soon as the 10 days are up. 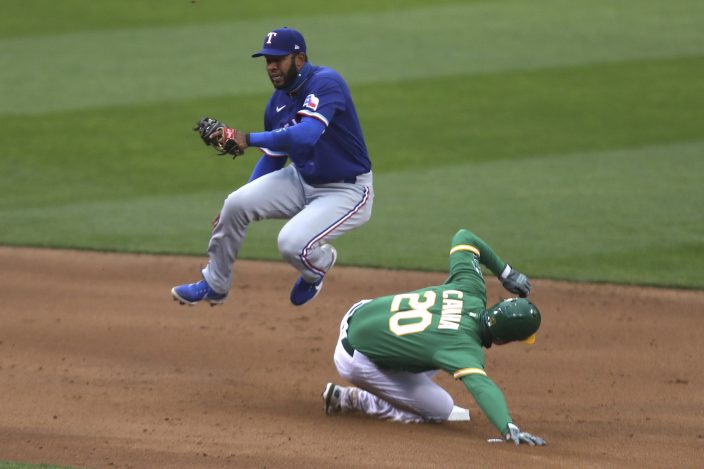 The Rangers opened the scoring in the sixth with a bit of an unconventional strategy. With two outs and nobody on, No. 3 hitter Gallo bunted away from the shift for a single off Yusmeiro Petit. The move paid off when Todd Frazier followed with an RBI double. 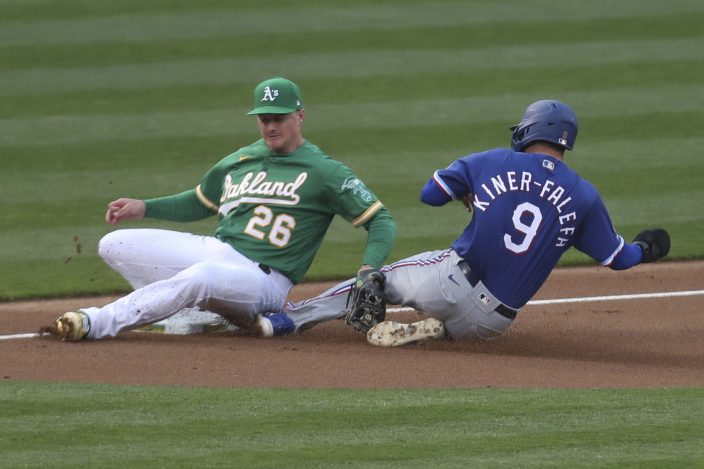 Bird ended up making a nice play even after going on the injured list. He caught a foul pop in his hat while sitting in the stands during an at-bat by Frazier in the sixth inning.

Rangers RHP Kyle Gibson (0-1, 0.00 ERA) took a tough loss last Tuesday in his first start of the year as the Diamondbacks scored three unearned runs in a 4-1 victory. The A’s oppose with lefty Sean Manaea (0-2, 7.00), who tries again for his first victory of the season. 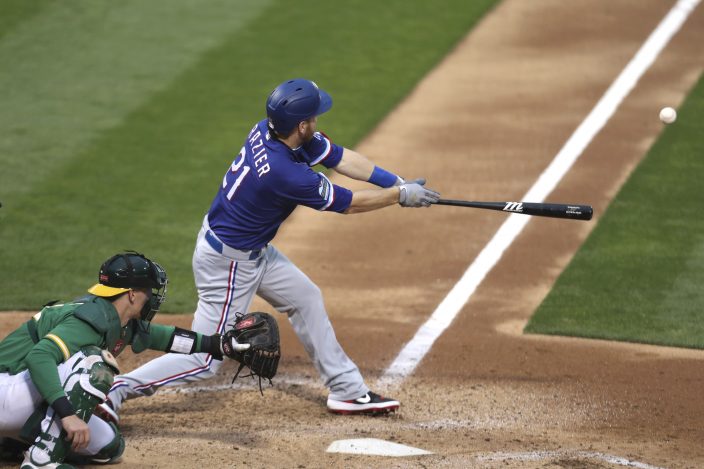