In the early days of the coronavirus crisis, President Donald Trump was flanked in the White House briefing room by a team of public health experts in a seeming portrait of unity to confront the disease that was ravaging the globe.

But as the crisis has spread to all reaches of the country, with escalating deaths and little sense of endgame, a chasm has widened between the president and the experts. The result: daily delivery of a mixed message to the public at a moment when coherence is most needed.

Trump and his political advisers insist that the United States has no rival in its response to the pandemic. They point to the fact that the U.S. has administered more virus tests than any other nation and that the percentage of deaths among those infected is among the lowest. 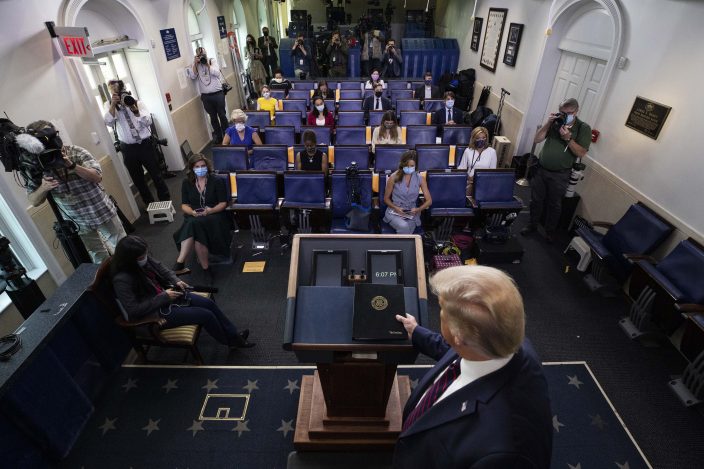 President Donald Trump arrives to speak during a briefing with reporters in the James Brady Press Briefing Room of the White House, Tuesday, Aug. 4, 2020, in Washington.(AP PhotoAlex Brandon)

“Right now, I think it’s under control,” Trump said during an interview with Axios. He added, “We have done a great job.”

But the surge in infections, hospitalizations and deaths tells a different story. And it suggests that the president is increasingly out of step with the federal government’s own medical and public health experts.

The U.S. death toll, which now stands at 155,000, is expected to accelerate. The latest composite forecast from the U.S. Centers for Disease Control and Prevention projects an average of nearly 1,000 deaths per day through Aug. 22. 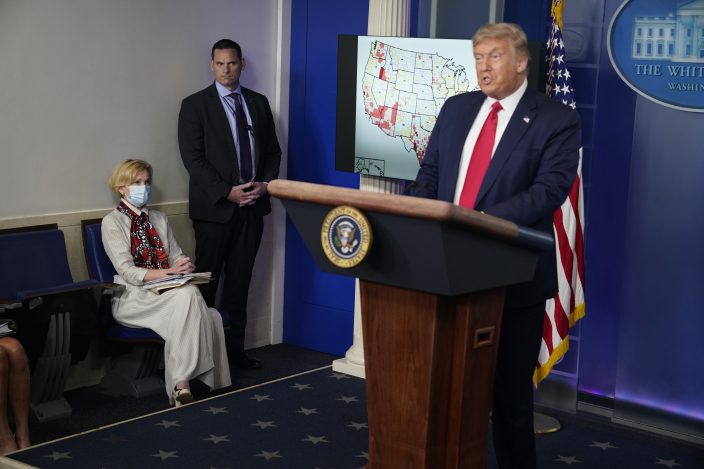 Trump didn't like that. He dismissed her comment as “pathetic” and charged she was capitulating to criticism from House Speaker Nancy Pelosi, who had earlier criticized Birx.

Adm. Brett Giroir, the assistant secretary of Health and Human Services who has avoided contradicting the president throughout the crisis, said on Sunday it was time to “move on” from the debate over hydroxychloroquine, a drug Trump continues to promote as a COVID-19 treatment even though there is no clear evidence it is effective. 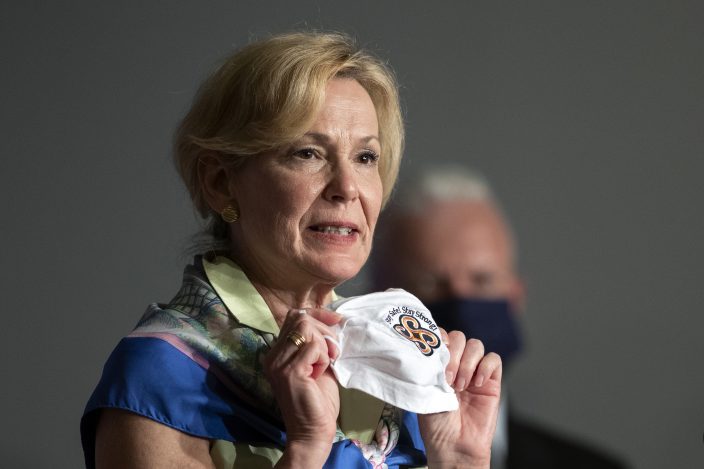 Dr. Robert Redfield, head of the CDC, last week acknowledged during an ABC News interview that the initial federal government response to the virus too slow.

“It’s not a separation from the president, it’s a cavernous gap,” said Lawrence Gostin, a public health expert at Georgetown University. “What we’re seeing is that scientists will no longer be cowed by the White House.”

Until recently, the medical experts on the White House coronavirus task force have walked a tightrope. They have been pressing to deliver the best science to the public while trying to avoid appearing to directly contradict Trump — in hopes of maintaining influence in the decision-making process. 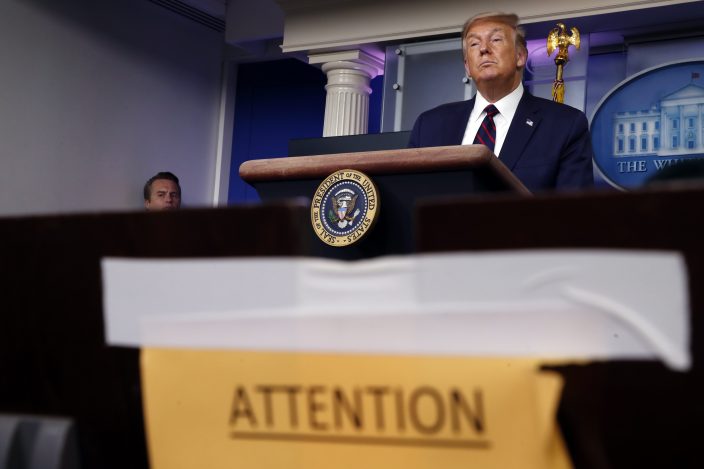 President Donald Trump speaks during a briefing with reporters in the James Brady Press Briefing Room of the White House, Tuesday, Aug. 4, 2020, in Washington.(AP PhotoAlex Brandon)

The effort has played out, at moments, as an awkward dance.

For months now, the West Wing has controlled the media schedule of Dr. Anthony Fauci, who drew the ire of the president and his advisers in the early days of the pandemic because of the outsized media attention he received and his perceived willingness to contradict the president, according to three White House officials and Republicans close to the West Wing not authorized to speak publicly about private conversations.

Fauci, the nation’s top infectious disease expert, has struck a far more cautious tone than Trump or any other member of the task force about the nation’s move to “reopen,” provoking the frustration of a president who sees a resurgent economy as key to winning another four years in office.

Birx, until recently, had largely stayed on the president’s good side, though her rosy depictions of the pandemic fight drew recent skepticism from Democrats and other public health officials. But Trump also shredded Birx privately as well as in his public comments this week for not striking a more optimistic tone about states that are doing well and for saying she had “tremendous respect” for Trump’s rival Pelosi, the officials said.

Throughout the pandemic, some government public health officials have privately expressed worry to West Wing staffers that they are fearful of contradicting the president even as they try to focus on the data and the science behind the administration’s response to the virus, officials said. But publicly, there has been a concerted effort to appear that the team and the Oval Office are speaking with one voice.

Redfield disputed on Monday that the health officials were looking to distance themselves from the president.

“I don’t think that’s an accurate characterization,” Redfield said in an interview. He added, ”I think we communicate freely and directly as we see the outbreak as members of the task force.”

On Monday, Trump seemed to walk back from his criticism that Birx was “taking the bait” from Pelosi and said that he had great respect for the doctor.

He suggested his frustration was spurred by his administration not receiving proper credit for testing so many people or for pushing to replenish the stockpile of ventilators early in the crisis. On Tuesday, he boasted that the U.S. has increased testing capacity by 32,000% since March 12 and has “far and away the most testing capacity in the world.” Trump in early March declared “anybody that needs a test gets a test." Yet, in many parts of the country, it can still take a week or longer for patients to receive test results.

His positive self-evaluation gives short shrift to the fact that the U.S. has the world’s fourth highest per capita virus death rate, according to Johns Hopkins University’s coronavirus resource center.

In the Axios interview, Trump insisted that the appropriate statistic to judge the virus response is the ratio of deaths to cases. By that metric, the U.S. ranks 14th among the 20 countries most affected by COVID-19. Chile, India, Argentina, Russia, South Africa and Bangladesh all have lower rates of deaths to infections, according to the Johns Hopkins-compiled data.

“It’s not a bragging right that over 3% in your country that’s infected is dying,” Georgetown University's Gostin said.

Trump’s undercutting of his health advisers makes it all but impossible for the federal government to speak with a single, authoritative voice at a time of national crisis, critics say.

“It’s a very dangerous place for the country to be,” said Kathleen Sebelius, health and human services secretary under President Barack Obama. “The reason I say it is very dangerous, is that we continue to have a White House that has made a public health crisis in this country into a debate about whether people like Donald Trump or not. We have never seen a situation like this before, and we are paying the price.”