The Latest on the explosion in Beirut (all times local):

International aid in the form of emergency workers and medical personnel is heading to Lebanon a day after a massive explosion devastated Beirut’s port, killing at least 100 people and wounding thousands. 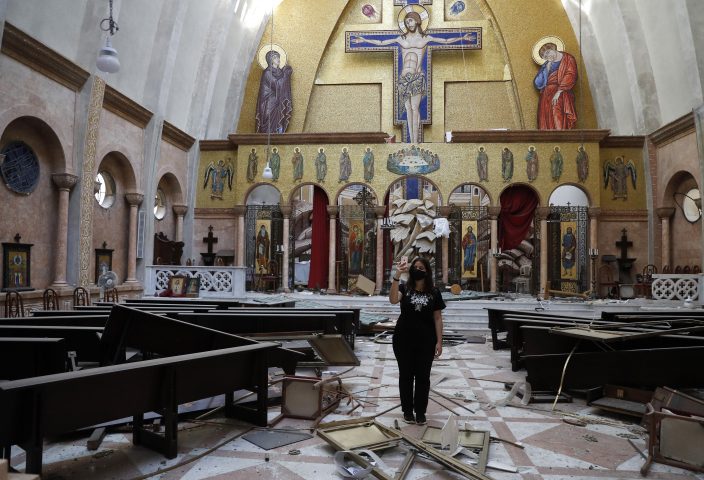 A woman takes pictures by her mobile phone for a damaged church, after an explosion hit the seaport of Beirut, Lebanon, Wednesday, Aug. 5, 2020. Residents of Beirut awoke to a scene of utter devastation on Wednesday, a day after a massive explosion at the port sent shock waves across the Lebanese capital. (AP PhotoHussein Malla)

France says it is sending two planes with dozens of emergency workers, a mobile medical unit and 15 tons of aid. French President Emmanuel Macron’s office says the aid should allow for the treatment of some 500 victims.

French peacekeepers stationed in Lebanon, a former French protectorate, have been helping since the explosions, Macron’s office said.

Jordan says a military field hospital including all necessary personnel will be dispatched, according to the Royal Court. Egypt has opened a field hospital in Beirut to receive the wounded.

Czech Interior Minister Jan Hamacek says Lebanon has accepted an offer to send a team of 37 rescuers with sniffer dogs to Beirut. Denmark says it is ready to provide humanitarian assistance to Lebanon, and Greece says it is ready to help Lebanese authorities “with all means at its disposal.”

Prime Minister Hassan Diab, in a short televised speech, has appealed to all countries and friends of Lebanon to extend help to the small nation, saying: “We are witnessing a real catastrophe.” He reiterated his pledge that those responsible for the massive explosion at Beirut’s port will pay the price, without commenting on the cause.

Diab's speech came the morning after the blast killed at least 100 people and wounded thousands.

Smoke was still rising from the port Wednesday morning. Major downtown streets were littered with debris and damaged vehicles, and building facades were blown out.

Lebanese Red Cross official George Kettaneh said at least 100 people were killed and more than 4,000 were wounded, and said the toll could rise further.

Cook leads Vikings into Houston in matchup of winless t ...

Dalvin Cook could be due for a big ...