Fireworks and ammonium nitrate appear to have been the fuel that ignited a massive explosion that rocked the Lebanese capital of Beirut, experts and videos of the blast suggest.

The scale of the damage — from the epicenter of the explosion at the port of Beirut to the windows blown out kilometers (miles) away — resembles other blasts involving the chemical compound commonly used as an agricultural fertilizer.

But the compound itself typically doesn't detonate on its own and requires another ignition source. That likely came from a fire that engulfed what initially appeared to be fireworks that were stored at the port. 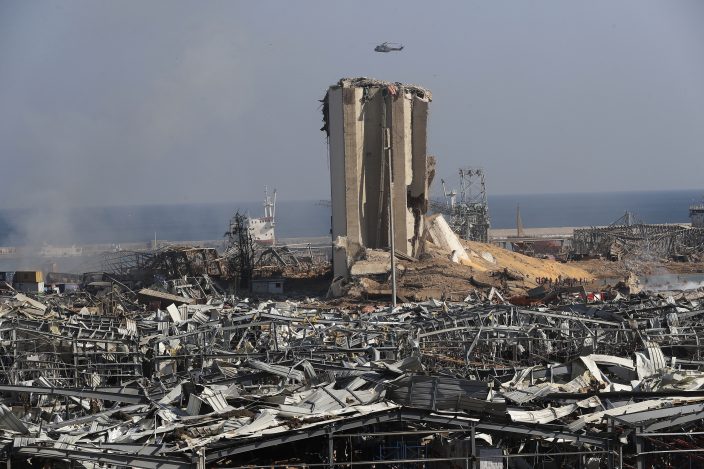 A Lebanese army helicopter flies over the scene where an explosion hit the seaport of Beirut, Lebanon, Wednesday, Aug. 5, 2020. Prime Minister Hassan Diab, in a short televised speech, has appealed to all countries and friends of Lebanon to extend help to the small nation, saying: "We are witnessing a real catastrophe." (AP PhotoHussein Malla)

Online videos of the disaster's initial moments show sparks and lights inside the smoke rising from the blaze, just prior to the massive blast. That likely indicates that fireworks were involved, said Boaz Hayoun, owner of the Tamar Group, an Israeli firm that works closely with the Israeli government on safety and certification issues involving explosives.

“Before the big explosion, you can see in the center of the fire, you can see sparks, you can hear sounds like popcorn and you can hear whistles," Hayoun told The Associated Press. "This is very specific behavior of fireworks, the visuals, the sounds and the transformation from a slow burn to a massive explosion.”

Jeffrey Lewis, a missile expert at the Middlebury Institute of International Studies in Monterey, California, offered a similar assessment. 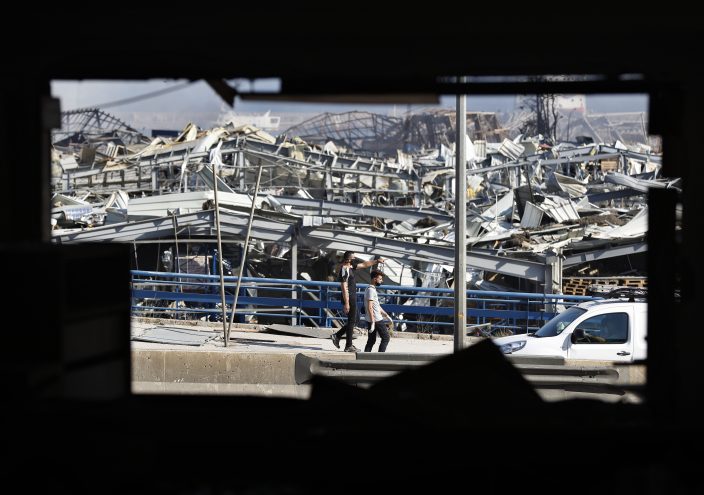 People walk by storages destroyed by an explosion that hit the seaport of Beirut, Lebanon, Wednesday, Aug. 5, 2020. Prime Minister Hassan Diab, in a short televised speech, has appealed to all countries and friends of Lebanon to extend help to the small nation, saying: "We are witnessing a real catastrophe." (AP PhotoHussein Malla)

“It looks like an accident,” Lewis told the AP. “First, there was a fire preceding the explosion, which is not an attack. And some of the videos show munitions what I could call popcorning, exploding like ’pop, pop, pop, pop.’”

“If you have a fire raging next to something explosive, and you don’t put it out, it blows up," he said. 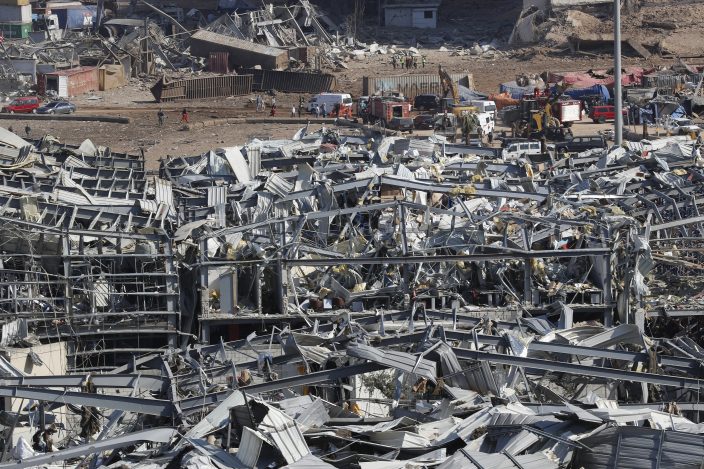 Rescue workers and security officers work at the scene of an explosion that hit the seaport of Beirut, Lebanon, Wednesday, Aug. 5, 2020. Prime Minister Hassan Diab, in a short televised speech, has appealed to all countries and friends of Lebanon to extend help to the small nation, saying: "We are witnessing a real catastrophe." (AP PhotoHussein Malla)

The white cloud that accompanied the massive blast appeared to be a condensation cloud, often common in massive explosions in humid conditions that can follow the shock waves of an explosion, Lewis said.

Orange clouds also followed the blast, likely from toxic nitrogen dioxide gas that's released after an explosion involving nitrates. Experts should be able to determine the power of the blast by measuring the crater left behind, which appeared massive in aerial footage shot on Wednesday morning by the AP.

What initially started the fire at the port remains unclear. Beirut was sunny before Tuesday's explosion, with a daily high of 30 degrees Celsius (86 degrees Fahrenheit).

Lebanese Interior Minister Mohammed Fahmi, in comments to a local TV station, made no mention of ignited fireworks but said it appeared the blast was caused by the detonation of more than 2,700 tons of ammonium nitrate that had been stored in a warehouse at the dock ever since it was confiscated from a cargo ship in 2014.

Based on the timeline and the size of the cargo, that ship could be the MV Rhosus. The ship was initially seized in Beirut in 2013 when it entered the port due to technical problems, according to lawyers involved in the case. It came from the nation of Georgia, and had been bound for Mozambique.

“Owing to the risks associated with retaining the ammonium nitrate on board the vessel, the port authorities discharged the cargo onto the port’s warehouses," the lawyers wrote in a 2015 article published by shiparrested.com. “The vessel and cargo remain to date in port awaiting auctioning and/or proper disposal.”

It remains unclear what conditions the ammonium nitrate had been stored in — or why tons of an explosive chemical compound had been left there for years. Lebanon already was on the brink of collapse amid a severe economic crisis that has ignited mass protests in recent months.

The devastation surrounding the port resembled other ammonium nitrate explosions, such as the 1995 Oklahoma City bombing and a 1947 ship explosion that struck Texas City, Texas.

It is also unclear what conditions a possible shipment of fireworks at the port had been stored in. Fireworks are very common in Lebanon, used to celebrate religious occasions and weddings.

While military explosives are generally safe to transport, common “cheap pyrotechnics” made in China are often of very low quality and can ignite very easily, especially in hot weather, said Hayoun, the Israeli explosives expert.

The “end result,” he added is that “hundreds of tons of energetic materials” were detonated to create a explosion of this magnitude.

“It started definitely with fireworks,” he said.

For Jeffery Simmons, being sidelin ...