When Sharon Taylor died of coronavirus, her family — standing apart, wearing masks — sang her favorite hymns at her graveside, next to a tiny headstone for her stillborn daughter, buried 26 years ago. Fresh flowers marked row after row of new graves. Holy Rosary is one of the only cemeteries in this Choctaw Indian family’s community, and it’s running out of space — a sign of the virus’s massive toll on the Choctaw people.

As confirmed coronavirus cases skyrocket in Mississippi, the state’s only federally recognized American Indian tribe has been devastated. COVID-19 has ripped through Choctaw families, many of whom live together in multigenerational homes. Almost 10% of the tribe’s roughly 11,000 members have tested positive for the virus. More than 75 have died. The once-flourishing Choctaw economy is stagnant, as the tribal government put in place tighter restrictions than those imposed by the state.

July brought a glimmer of hope, with some numbers dropping among Choctaws, but health officials worry that with cases rising elsewhere in the state, the reprieve is only temporary. On Friday, Mississippi recorded its highest single-day coronavirus-related fatality count, 52. 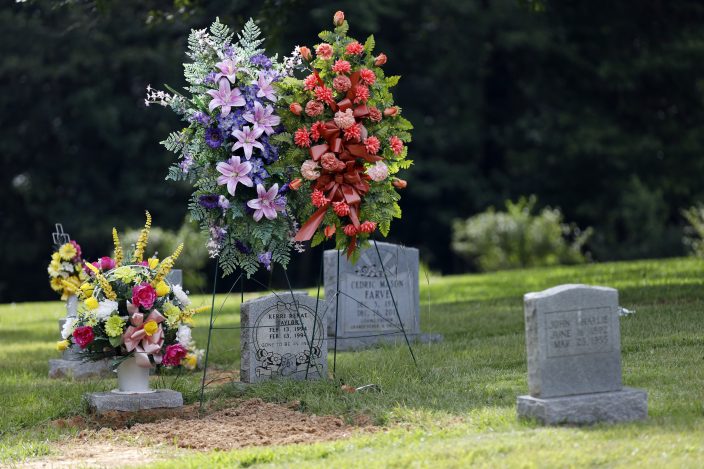 Flowers decorate the Tucker, Miss., grave of Sharon Taylor, mother of Choctaw Central High School's valedictorian Kristina Taylor, and one of several members of the Mississippi Band of Choctaw Indians, who died recently after a bout with coronavirus, Tuesday July 21, 2020. Taylor was buried next to several deceased relatives. As cases of coronavirus rise in the Mississippi, the only federally recognized Native American tribe in the state has seen a devastating impact. (AP PhotoRogelio V. Solis)

As a community health technician, Taylor, 53, took the virus seriously from the start. She answered calls from tribe members with symptoms and delivered medicine. In June, she fell ill herself.

Kristina Taylor, 18, one of Sharon's five children, learned just before her mother was admitted to the hospital that she'd been named valedictorian of the tribal high school. Sharon had predicted the accomplishment for years — in some of their last moments together, Kristina showed her mom the speech she'd prepared for graduation and the Choctaw beadwork her sister used to decorate her cap. 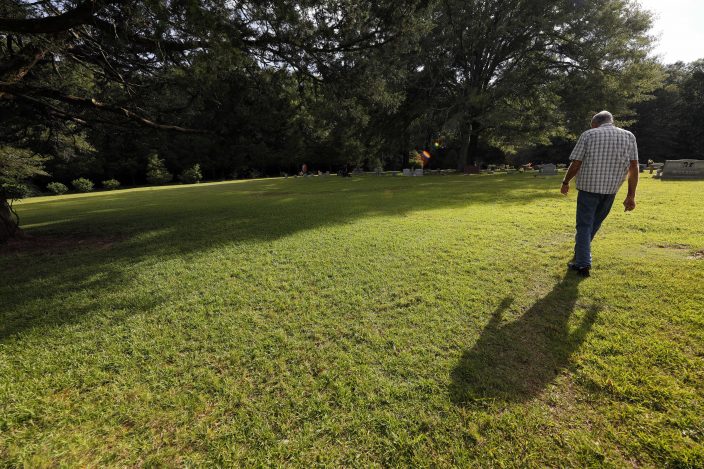 Father Bob Goodyear strolls across the center section of the cemetery on the grounds of the Holy Rosary Indian Mission in Tucker, Miss., Tuesday, July 22, 2020, where about 400 Choctaw are buried in unmarked graves, victims of the 1918 Spanish Flu pandemic. People died so quickly they were buried without markers. The current corona virus has affected the Mississippi Band of Choctaw Indians, leading to an uptake in burials at the cemetery. (AP PhotoRogelio V. Solis)

That day, Sharon Taylor took her daughter to the family plot at Holy Rosary. It was always special: a place to mark important events, to be together, to visit the grave of baby Kerri. Other relatives are buried there, too, and it's where Sharon wanted her final resting place.

But the Rev. Bob Goodyear says there's not much more room to expand, in part because of another pandemic. The Spanish flu of 1918 took lives so quickly residents didn't even have time to put up markers, and 400 victims are buried in an open field on cemetery grounds.

“I pray it doesn’t come to that this time,” said Goodyear, whose Catholic church has always buried Choctaws, regardless of faith. The tribe recently voted to establish a community cemetery nearby, which will ease the burden, said Goodyear, who isn't a Choctaw but has ministered in the reservation community for decades. 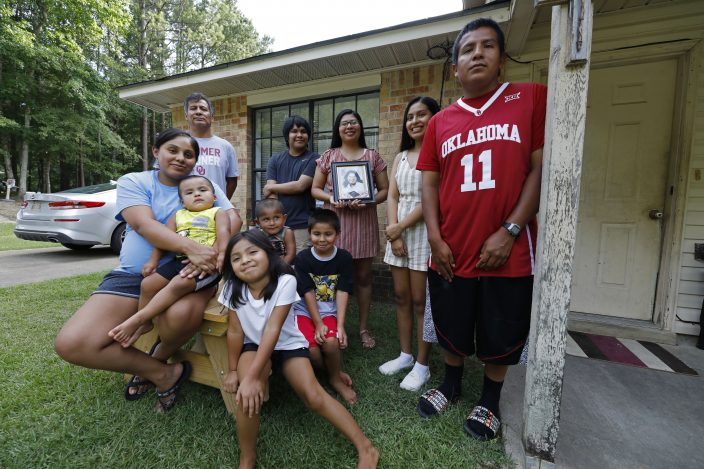 Family members gather with a portrait of their wife, mother, and grandmother, Sharon Taylor, in the photo frame, at their Tucker, Miss., home, Tuesday, July 21, 2020. From left back row, are father, Franklin Taylor, 54; Damien Shockey, 21, fiancé of daughter Kristina Taylor, 18, holding the portrait of the mother; daughter Kaydee Taylor, 15, second from right in the back row; son Klifton Taylor, 2; daughter Kristi Wishork, 25, front row left and her children, Colby Wishork, 1, daughter Renaya Farmer, 5, in front, sons Xavier Wishork, 2, center and Braydon Farmer, 7. For the Taylor family, June 2020 was supposed to be for celebrating daughter Kristina being selected as valedictorian from Choctaw Central High School, the tribal high school for the Mississippi Band of Choctaw Indians. Instead, the family buried the mother, a victim of COVID-19. (AP PhotoRogelio V. Solis)

Dr. Thomas Dobbs, the state health officer, said that like other Native American communities, coronavirus deaths among the Mississippi Band of Choctaw Indians have been driven by underlying conditions such as diabetes, cardiovascular disease and high blood pressure, present in more than 80% of deadly Mississippi cases. The reservation hospital, where Taylor worked, can't handle severe coronavirus cases. They're sent to facilities elsewhere in the state - Taylor died 80 miles (129 kilometers) from home, in Jackson.

In Neshoba County, named for the Choctaw word for wolf, more than 25% of residents live under the poverty line. It's a rural area, characterized by dusty red clay and rolling pine-filled hills. The Golden Moon Casino on Highway 16, with a glittering moon on its roof, serves as a welcome to Choctaw land. From there, the reservation spreads out over 35,000 acres (14,164 hectares).

Choctaw Indians used to live across millions of acres in southeastern Mississippi but were forced off the land. Under an 1830 treaty, the Choctaws were to move to Oklahoma. Those who remained in Mississippi endured segregation, racism and poverty. 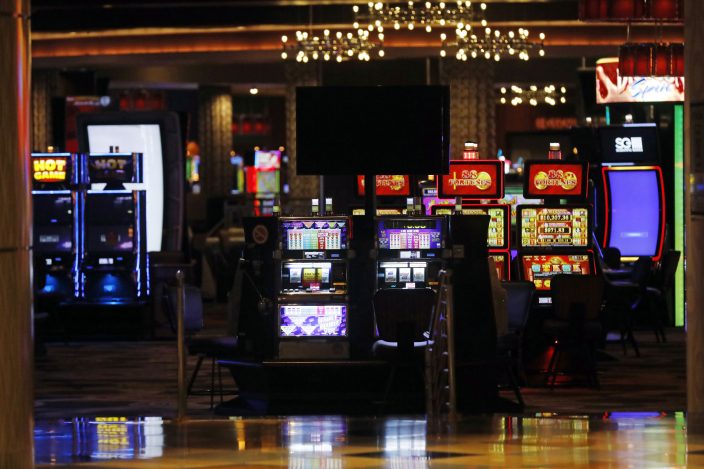 Brightly lit slot machines beckon players who cannot enter the closed gaming venues on the tribal lands of the Mississippi Band of Choctaw Indians in Philadelphia, Miss., Tuesday, July 21, 2020. The seriousness of COVID-19 and its effect on the tribe, are highlighted by the continued closure of the gaming venues and their hotels and the widely attended water park. Around 1,000 people have tested positive for the virus, including the tribal chief. More than 70 have died. (AP PhotoRogelio V. Solis)

In the 1990s, the Choctaws started building what became a strong tribal economy. They own a family-style resort with a water park and two casinos; the tribe is a leading employer in eastern Mississippi.

But the tribal government has been more conservative in reopening efforts during the pandemic than Republican Gov. Tate Reeves and other Mississippi officials. The tribe passed a mask requirement July 1, but Reeves refused to implement one statewide, until Tuesday. Choctaw casinos remain closed, more than two months after the state allowed casinos to reopen. About 2,0000 employees are furloughed, the tribal chief said. The annual Choctaw Indian Fair, which draws thousands, was canceled.

The tribe has long been a target of hate, members say, and the virus has only made things worse. On social media, people blame Choctaws for high case numbers. Choctaw employees have been harassed at their jobs; others are called names in stores. 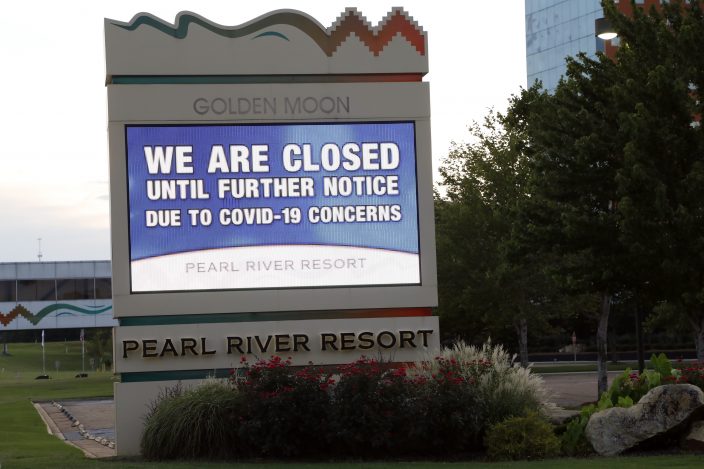 Instead of welcoming visitors to the Pearl River Resort, the marquee outside the Golden Moon Casino and Hotel, informs the public that the gaming venues, their hotels and the water park are closed, Tuesday, July 21, 2020 in Philadelphia, Miss. The seriousness of COVID-19, hits the tribe hard, especially with around 1,000 tribal members having tested positive for the virus, including the tribal chief. More than 70 people have died. (AP PhotoRogelio V. Solis)

“We’ve heard so many bad things about ourselves and our people — the first thing people turn to is blame and hate,” said Marsha Berry, a tribe member who helped form a group that delivers food and other necessities to people self-isolating.

Anita Johnson lives near the funeral home that has handled arrangements for all the Choctaws lost to the virus. Each time a funeral procession passes her house, her family stops what they're doing to pray. 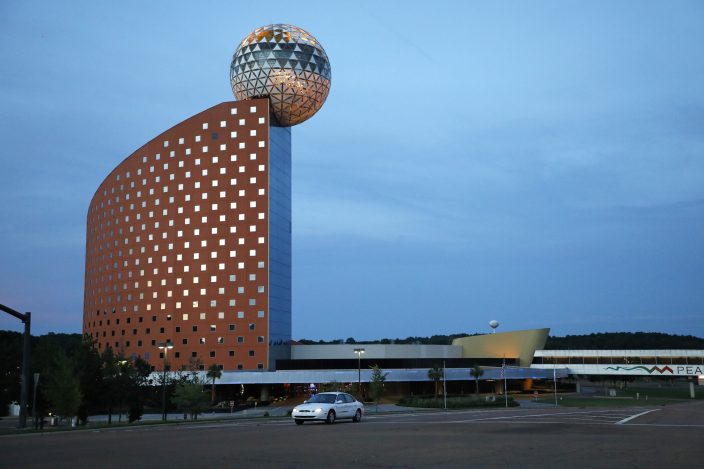 Dusk envelopes the Mississippi Band of Choctaw Indians' trademark globe atop the Golden Moon Casino and Hotel, Tuesday, July 21, 2020, in Philadelphia, Miss. The seriousness of COVID-19 and its effect on the tribe, are highlighted by the continued closure of the gaming venues, their hotels and the widely attended water park in Philadelphia. Around 1,000 people tribal members have tested positive for the virus, including the tribal chief. More than 70 have died. (AP PhotoRogelio V. Solis)

When Sharon Taylor died, her family couldn’t grieve as Choctaws normally would. Because of the chief's ban, there was no bonfire for the occasion, no wake with people dropping by for days to pay respects and drop off meals.

Instead, at her graveside, her family shared stories of the woman who valued their tight-knit family and community above all else, who never missed a gathering and always had a grandchild on her lap. They sang the hymns she loved, the ones she'd sung to her kids, and then her grandkids.

Her 25-year-old daughter, Kristi, is pregnant, and she'd like to name her baby girl for Sharon. 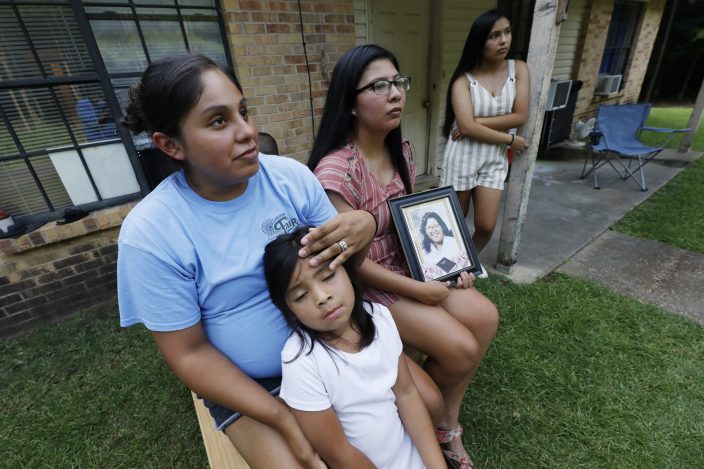 Sisters Kristi Wishork, left, consoles her daughter Renaya Farmer, 5, as she and her sisters Kristina Taylor, center and Kaydee Taylor, right recall the family pride and love their late mother, Sharon Taylor, had for their family, Tuesday, July 21, 2020 outside the family home in Tucker, Miss. Sharon Taylor, 53, died of coronavirus at the University of Mississippi Medical Center in Jackson on June 26 after two weeks in the hospital and never saw her daughter Kristina, the class valedictorian at Choctaw Central High School, graduate. (AP PhotoRogelio V. Solis)

“She was always looking out for other people,” Kristina Taylor said. “Now, she’s watching over us.”

Leah Willingham is a corps member for the Associated Press/Report for America Statehouse News Initiative. Report for America is a nonprofit national service program that places journalists in local newsrooms to report on undercovered issues. 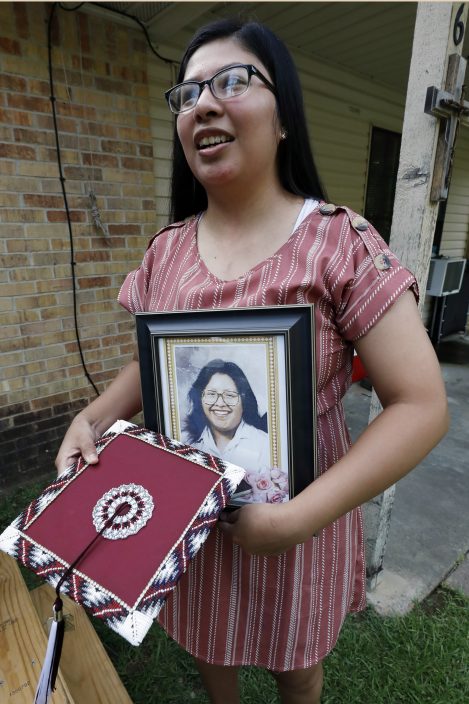 Kristina Taylor, 18, holds a portrait of her late mother, Sharon Taylor, and the special beaded mortar board she would have worn during graduation ceremonies at Choctaw Central High School, Tuesday, July 22, 2020 in Tucker, Miss. For the Taylor family, June 2020 was supposed to be for celebrating daughter Kristina being selected as valedictorian at Choctaw Central High, the tribal high school for the Mississippi Band of Choctaw Indians. Instead, the family buried the mother, a victim of COVID-19. (AP PhotoRogelio V. Solis) 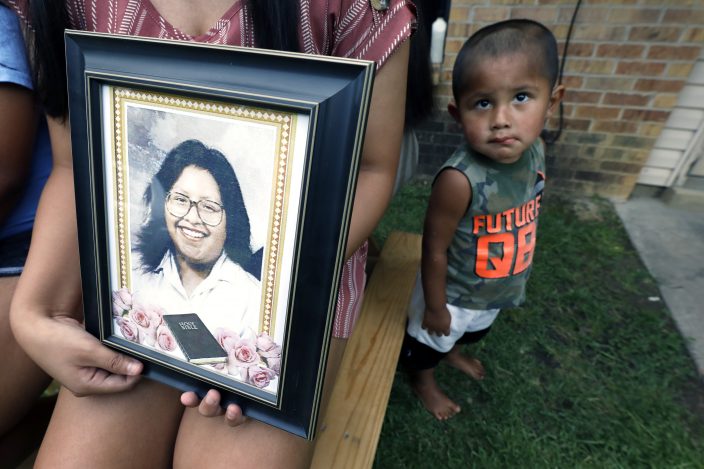 Kristina Taylor, 18, holds a portrait of her late mother, Sharon Taylor, while nephew Xavier Wishork, 2, stands at attention, Tuesday, July 22, 2020 in Tucker, Miss. For the Taylor family, June 2020 was supposed to be for celebrating daughter Kristina being selected as valedictorian at Choctaw Central High, the tribal high school for the Mississippi Band of Choctaw Indians. Instead, the family buried the mother, a victim of COVID-19. (AP PhotoRogelio V. Solis)

Still no cause for mass pilot whale stranding in Austra ...

The reason for Australia’s biggest ...