Like much of the world, Colombia shut down in March as coronavirus cases surged in Europe and began trickling into the South American country.

But while restrictions have been lifted in many places elsewhere, a nationwide stay-at-home order remains in effect in Colombia more than four months after being put into place.

Isolation orders have been extended repeatedly as cases continue to rise and a limited economic reopening that began in April has inched forward only slightly. Colombia now has the ninth-highest total of COVID-19 infections worldwide, prompting President Iván Duque to prolong the quarantine again until late August. 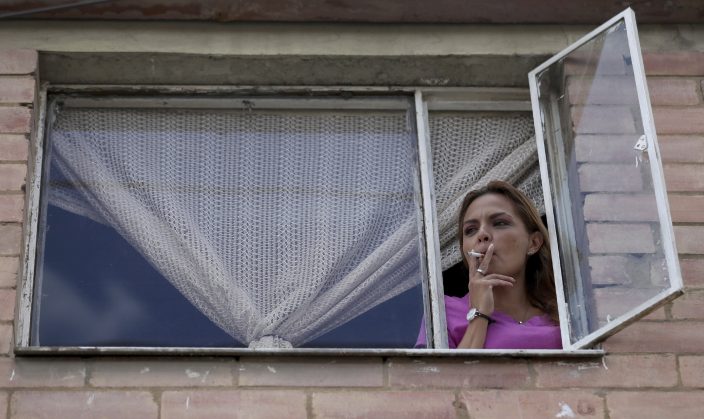 Myriam Roncancio smokes a cigarette as she poses for a photo in her window during a nationwide stay-at-home order to slow the spread of the new coronavirus, in the Soacha borough of Bogota, Colombia, Tuesday, July 28, 2020. “From one moment to the next, my life changed,” says the 35-year-old mother of two, who is living with her parents after breaking up with her husband of 10 years. “A 180-degree turn.” (AP PhotoFernando Vergara)

The effects of the long isolation are beginning to surface: In the capital of Bogota, the mayor’s office reports that suicide attempts are up 21% since the start of quarantine. Psychologists have seen a dramatic rise in new patients complaining of anxiety and depression. Divorce lawyers say they are getting more inquiries, although clients also discover they cannot afford to separate.

“From one moment to the next, my life changed,” said Myriam Roncancio, 35, who is living with her parents after breaking up with her husband. “A 180-degree turn.”

Health experts say Colombia and a handful of other places in Latin America with especially long lockdowns have been moderately successful in using the time to slow infections, boost testing and expand ICU capacity. But they also worry about quarantine fatigue just as cases reach their peak, and they say more should be done to stress commonsense protections. Myriam Roncancio, who is living with her parents after breaking up with her husband of 10 years, wipes down the kitchen counter during a nationwide stay-at-home order to prevent the spread of the new coronavirus, in the Soacha borough of Bogota, Colombia, Tuesday, July 28, 2020. Now the 35-year-old shares a room with her two children in her parents’ apartment and gets out only twice a week to buy groceries. “It’s like a ghost town,” she said. “I can’t get used to it.” (AP PhotoFernando Vergara)

“I’m worried about middle- to low-income countries where it seems quarantine is the main strategy,” says Andrés Vecino, a health economist at John Hopkins University. “And that creates a problem because in the medium term, it gets exhausted.”

The long lockdown is essentially a result of timing: Colombia and much of South America imposed the strict measures when they had far fewer cases than Europe. Quarantines in Europe have steadily been lifted as confirmed cases have dropped, although some countries in Africa are still locked down.

But in Latin America -– now an epicenter in the pandemic -– reports of infections are continuing to climb. 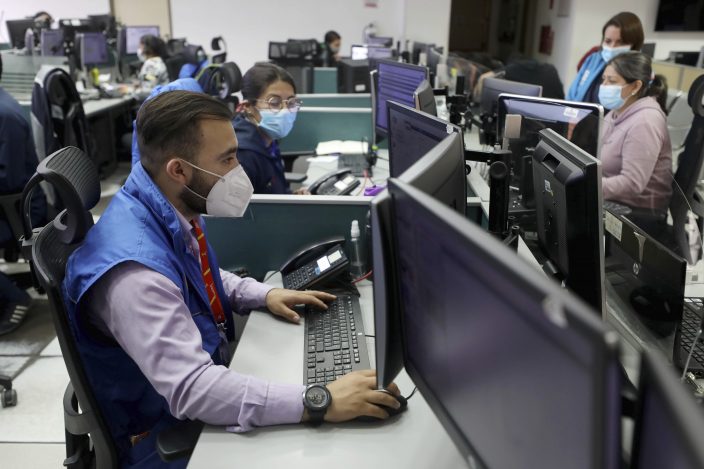 “We wanted to go at the same velocity as Europe,” said Carlos Alvarez, a clinical trial coordinator for the World Health Organization in Colombia. “But the moment of the pandemic was different.”

A map by researchers at the University of Oxford tracking government response measures shows much of the world in an accordion-like dance of opening and closing to various degrees, while a considerable part of South America remains stuck.

“It’s not the only region -– but it is more true in Latin America than many other parts of the world, I’d say,” said Thomas Hale, a professor spearheading the project. 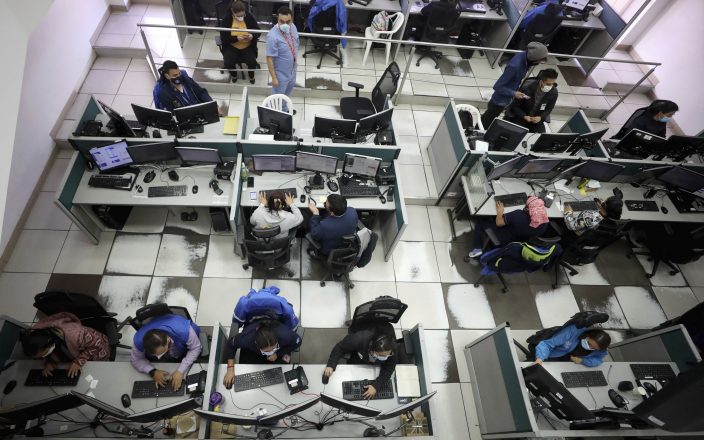 City phone service operators provide psychological support to residents during a nationwide stay-at-home order to prevent the spread of the new coronavirus, in Bogota, Colombia, Monday, Aug. 3, 2020. In the capital of Bogota, the mayor’s office reports that attempted suicides are up 21% since the start of quarantine, while psychologists have seen a dramatic rise in patients complaining of anxiety and depression. (AP PhotoFernando Vergara)

Outside the region, a few other parts of the world remain continuously confined.

In Africa, where cases are rising, several countries have imposed strict measures. South Africa, with more than 500,000 cases, has banned the sale of alcohol and cigarettes, closed bars and imposed a nighttime curfew. Masks are mandatory in public areas, with fines imposed on those who ignore the regulation.

To be sure, even Colombia’s nationwide “preventative obligatory isolation” was never as deep and strict as quarantines elsewhere. There are now 46 exceptions that allow people to leave home for various activities. 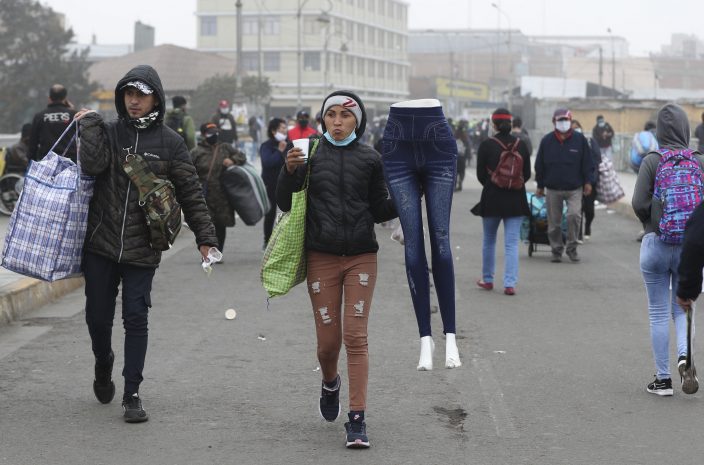 FILE - In this July 23, 2020 file photo, street vendors keep moving so as not to be stopped by police on a pedestrian bridge that leads to a bus platform, amid the COVID-19 pandemic in Lima, Peru. Peru gave up on isolation measures after three months, due to the severe economic cost and high number of informal workers flouting the quarantine. (AP PhotoMartin Mejia)

Peru gave up on isolation measures after three months due to the severe economic cost and high number of informal workers flouting the quarantine. Others like Brazil and Mexico never closed entirely.

But many Colombians like Nilva Rodriguez, 50, in Barranquilla, have scarcely left their homes. Only twice in four months has she been outside the house she shares with her elderly parents, brother, his pregnant wife and a teenage child.

When she talks to relatives in Miami, she says they are stunned to learn that she cannot even go to a nearby beach because it remains closed. 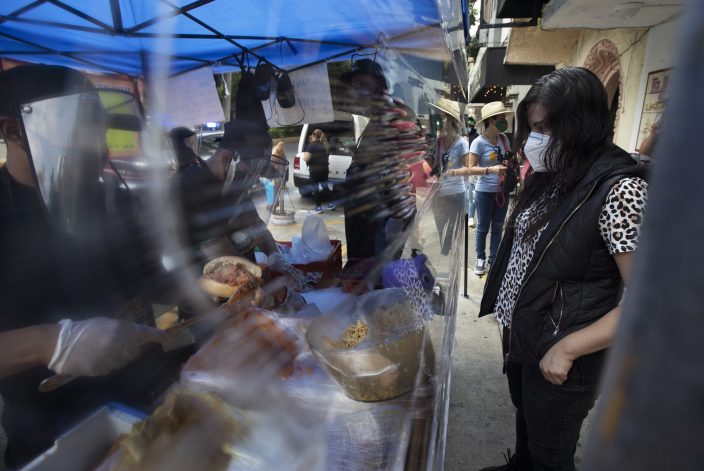 A vendor, wearing a face shield and protective face mask amid the new coronavirus pandemic, prepares a "torta de chilaquiles" for a customer, in Mexico City, Saturday, Aug. 1, 2020. More than half of Mexicans work in the informal economy, which is believed to have shed many more jobs as the economic shutdown caused by the COVID-19 pandemic has driven the country deeper into a recession. (AP PhotoMarco Ugarte)

Her mother, accustomed to going to church each day, has grown depressed and complains that virtual Mass just isn’t the same. Her father sometimes gets irritable. Everyone has staked out a part of the house for themselves.

“Every month has its drama, its situation,” she says.

Calls to a Bogota hotline to report domestic violence have more than doubled since before quarantine. The mayor’s office has set up a mobile brigade operating around the clock to respond to mental health crises. A city phone service offering psychological support has gotten nearly 25,000 calls during the lockdown.

People working in the fitness industry protest in Cape Town, South Africa, Wednesday August 5, 2020. The industry's governing body FitSA estimates that over 115 000 people have been affected by the lockdown regulations that saw gyms forced to close their doors back in March in a bid to curb the spread of Covid-19. (PhotoNardus Engelbrecht)

Miguel Antonio Duarte, a psychologist in Bogota, said he has twice as many patients. They include men with anger-management issues and women looking to end relationships.

“This context has allowed women to finally realize they are being mistreated,” he said.

Conversely, the lockdown has also made it more difficult for many women to report domestic abuse and file for divorce, said lawyer Jimmy Jiménez.

In Bogota, residents are allowed out for certain nonessential activities only on odd or even days of the week, depending on the last number of their national identification cards. Because many also work from home, that means little time to escape from an abusive spouse. Those seeking divorces quickly realize they can’t afford it, barely able to pay rent, utilities and food bills as a family unit.

As a result, many strained couples stay together, sleeping in separate rooms.

The escalating mental strain is happening in a country where many already feel anxiety, depression or post-traumatic stress related to Colombia’s long civil conflict -– and where there is considerable stigma around psychological ailments.

“This is a country with the traumas of war, drug trafficking, violence,” said Dr. Omar Cuéllar, the director of a private mental health clinic in Bogota. “It’s a hotbed in which very easily any new circumstance can make things that much worse.”

Colombia has significantly increased virus testing and expanded ICU capacity by almost 40% since the outbreak began — advancements that officials say have allowed it to avoid a total collapse of the health care system.

Yet experts like Dr. Luis Jorge Hernández, a public health professor at the University of the Andes, worry about the harmful side effects of asking people to stay inside for so long, like lower vaccination rates and worsening cardiac disease in those already mostly sitting indoors.

“The quarantine is causing a lot of damage,” he said.

President Iván Duque says the country is moving toward more focused quarantines. Bogota is instituting stricter lockdowns in certain neighborhoods for two-week periods. The mayor also is requiring those who are obese or with certain chronic diseases to stay indoors.

The Americas branch of the WHO put out a strict call last week for nations not to reopen until their cases are declining.

For Roncancio, whose marriage of 10 years ended abruptly, life has been on hold.

After she lost her job as a restaurant administrator at the start of the outbreak and her husband lost his as a baggage handler at Bogota’s airport, they were unable to pay their rent and their quarreling became more frequent. That’s when he left, she says.

Now she shares a room with her two children in her parents’ apartment and gets out only twice a week to buy groceries.

Serena Williams laughed at her own ...