When Liam Neeson sits down with a script, he usually knows within five pages whether he wants to do it. He calls it his “cup of tea” test. If he finds himself eager to get one, it’s not a good sign.

But he found himself unable to break away from James D’Arcy’s “Made in Italy,” about an artist and his estranged son who reunite to sell the family’s Italian home. It’s been nearly deserted since the death of the family matriarch and the once memory-filled home has fallen into disrepair. The grief aspect hit close to home for Neeson, who lost his wife, actor Natasha Richardson, after a skiing accident in 2009.

“It made me a little scared, but I certainly knew I had to do it,” Neeson said from his home in upstate New York. He had another thought, too: What if their son, Micheál Richardson, could also play his son in the film? 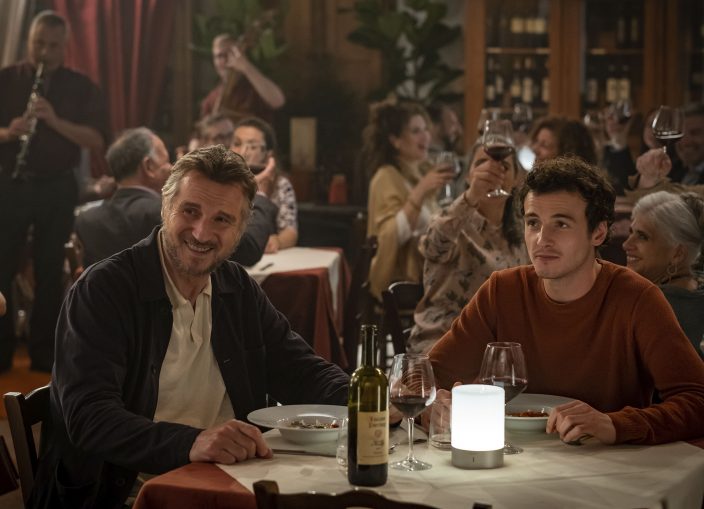 This image released by IFC Films shows Michaél Richardson, right, and his father Liam Neeson in a scene from "Made In Italy." They play father and son in the film but their characters are dealing with the loss of their wife and mother. Neeson's wife and Richardson's mother, Natasha Richardson, died over a decade ago in a skiing accident. (IFC Films via AP)

D’Arcy, who wrote and would be directing, met with him and a few hours later phoned Neeson saying, “I think this is going to work.”

They'd worked together before. Technically their first appearance was in the “Anchorman” sequel, where Richardson is one of Neeson’s History Channel crew. And it wouldn’t be the first time they'd played family either. Richardson played the son in the 2019 film “Cold Pursuit” (which he insisted on auditioning for). But this would be different, and more personal.

Richardson, who changed his name a few years ago to honor his late mother, had decided in the past few years to pursue the family profession. On his mother’s side, it’s a dynasty extending back to the 1700s. But he didn’t want to simply rely on the family name.

After “Cold Pursuit” he told himself to do things on his own, separately from his father. Then “Made in Italy” came along and the parallels were too uncanny to ignore.

“It seemed like my mom had a hand in it,” Richardson said.

Again, he insisted on auditioning. And soon enough the two were in Tuscany shooting the dramatic comedy, which comes out Friday on video on demand.

Richardson, who was born in Ireland and grew up in New York, wasn’t what you might call a “set kid,” but he would occasionally visit his parents’ rehearsals and shoots for plays and movies. Not knowing the words, he would ask if they were going to “an in or an out.” He remembers bits and pieces of things, like visiting his mother’s rehearsals for “Cabaret” and “A Streetcar Named Desire,” or his father on the set of “The Phantom Menace.” Neeson likes to tell a story about how the then-2-year-old Richardson, who had never seen a “Star Wars” film, ran up and gave R2-D2 a bear hug.

But acting wasn’t an inevitability, even if it was always part of his life. It’s only been in the past couple of years that he’s gotten serious about it. Neeson is supportive, too, but also had a ground rule for set.

“I said to him, ’Look, Micheál, there’s only room on a set for one director. And that’s James D’Arcy,” Neeson said. “If you want to talk about anything to do with the process of acting or whatever, let’s talk about when we wrap each day’s work. On set you’re just another actor to me and I’ll treat you the same as anybody else.”

Still, he couldn’t help but eavesdrop on a few of D’Arcy’s note sessions with Richardson. He was proud of his son for taking them in stride.

Plus, Neeson said, “They were notes I agreed with.”

“Sometimes it hurts and the pain is too much and your mind can go on autopilot and you push away because it hurts. That’s essentially what (my character) Jack did. He couldn’t remember a lot of things,” Richardson said.

“The takeaway for me is nobody knows how to grieve but the best way to do it is by carrying your loved ones with you, not shutting them out. And honoring them and doing things in your life day to day that they would be proud for you to do.”

Both hope the movie brings people a little bit of joy and escape to a scenic locale. Although it looks idyllic on screen, Neeson said it was actually pouring rain for most of their four and a half weeks there.

“We could have been in Belfast,” Neeson said. “But the movie gods came to our aid and on the last few days we got that magnificent Tuscan sunshine. You could see why Michelangelo, Leonardo and all the great Renaissance painters fell in love with it, because it truly was like a religious experience being in that geography and in that climate.”