The new leader of the suburban Denver police department whose officers put Elijah McClain in a chokehold before the young Black man died last year and handcuffed Black girls over the weekend said Wednesday that she is committed to rebuilding the public's trust by empowering police to veer away from strict training protocols and think about whether they are acting on their biases.

Vanessa Wilson was named the new chief of the Aurora Police Department this week after serving as its interim leader. She took the permanent position while the agency reels from filmed encounters with Black people that have drawn widespread attention on social media and triggered a series of investigations as the nation works to confront racism and police violence.

Aurora's first female chief, who is white, said the scene filmed by a bystander of the girls lying face down on the ground Sunday next to a car that police thought was stolen was “inhumane and just unbelievable to watch.” Two of the girls are in handcuffs and a 6-year-old girl wearing a pink crown cries for her mother. It would never have happened, she told The Associated Press, had officers used their common sense to respond to what they observed. 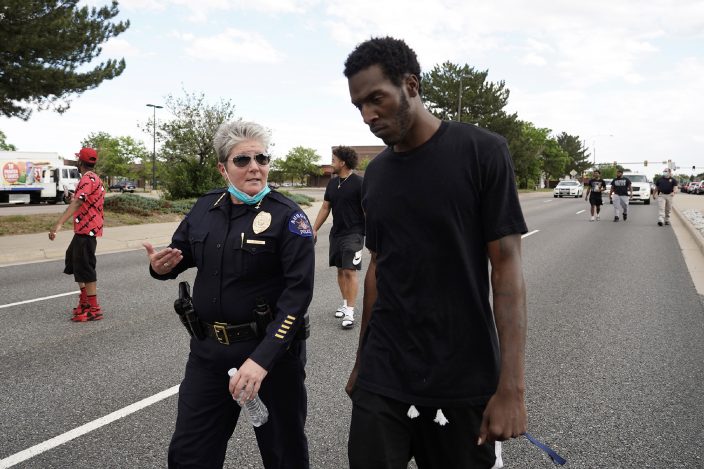 FILE - In this June 2, 2020 file photo, interim Aurora Police Chief Vanessa Wilson and Jay B. confer as protesters march north during a peaceful protest against police brutality in Aurora, Colo. Wilson was picked to be the chief of the Aurora Police Department in a 10-1 vote Monday night, Aug. 3 becoming the first woman to hold the job, after competing with three other nationwide finalists to lead the agency in Colorado’s third largest city, a diverse community east of Denver. (Philip B. PostonSentinel Colorado via AP, File)

“I know that people are angry and disgusted by what they saw. And so am I," Wilson said. “I also want to tell you that a lot of our own officers are dismayed and angered about why in the world that call went that way.”

The car was later determined not to be stolen. Wilson said an internal investigation has begun and she planned to talk to the officers later Wednesday.

Officers are trained to draw guns and put people on the ground when stopping a stolen car because it is considered high risk, but when the mother, Brittney Gilliam, told police the car was not stolen and there were children inside, they should have put their guns away and talked to her from a safe distance, Wilson said. 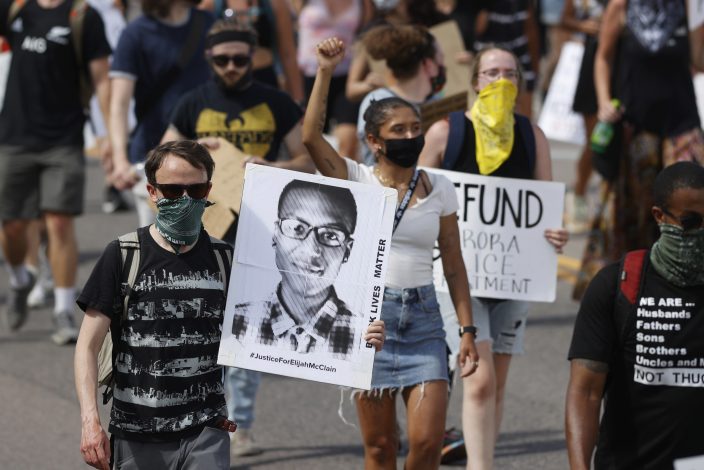 FILE - In this June 27, 2020 file photo, demonstrators carry placards as they walk down Sable Boulevard during a rally and march over the death of Elijah McClain in Aurora, Colo. Interim chief Vanessa Wilson was chosen Monday, Aug. 3 as the new chief of the Aurora Police Department, looking to regain public trust following a tumultuous year filled with scrutiny after the death of McClain, a Black man officers stopped on the street and put into a chokehold. (AP PhotoDavid Zalubowski, File)

The car had the same license plate number as a motorcycle reported stolen from another state, but officers failed to crosscheck an alert about Gilliam's vehicle with the original stolen motorcycle report, the police chief said.

While interim chief, Wilson told officers that because of implicit bias and racism in the world, they no longer had to contact a person reported to be suspicious, as McClain was as he walked home from the store last August, if they did not see evidence of a crime.

Police stopped McClain, 23, put him in a chokehold and then paramedics gave him 500 milligrams of ketamine to calm him down. McClain suffered cardiac arrest, was later declared brain dead and taken off life support several days later.

The Colorado attorney general is investigating a year after a local prosecutor said there wasn’t enough evidence to prosecute the officers. It’s one of a handful of investigations into McClain’s death, including a city review of police policies like use of force.

“I have changed the directive on suspicious-person calls so that if someone is called in as suspicious just because of the color of their skin, that officers don't have to be robotic in their response,” Wilson said.

She noted that in the past, residents sometimes complained if they did not see a police presence in response to those calls. She said that the community needs to support the shift in policing and that she would defend her officers for using their best judgment.

Wilson said everyone, including police, should be aware of their implicit biases and check themselves on whether they are acting on them.

“I think the call to action across the nation has been heard loud and clear, not only for me as the chief of Aurora, but other chiefs across the nation," she said. “And we need to do better, and we need to listen to the community and give them a voice and police them the way they want to be policed.”

Activists and leaders in Colorado say they hope Wilson, who's been with the Police Department for 23 years, can help create meaningful change.

Gov. Jared Polis told reporters Tuesday that he hopes Wilson is ready to work to increase transparency within the department and rebuild trust.

McClain family lawyer Mari Newman said she’s wary of Wilson’s experience within a department riddled with brutality and racism but is also an optimist.

“My hope is that she will prove that she has not just the moral compass but also the fortitude to do the right thing and to overhaul a broken department,” Newman said Tuesday.

Shenika Carter, a Denver community activist who has taken part in the protests over McClain’s death, would like to see Wilson require anti-racist and anti-oppression training for officers. She said the department cannot tolerate any “bad apples” because the actions of those officers can be life or death for people of color.

Marc Sears, president of the local Fraternal Order of Police chapter, said Wilson was the right person to lead the department and is free as permanent chief to make the changes she wants without fear of a replacement undoing them.

Suspect arrested in shooting of 2 protesters in Colorado