Playing a road game in their home ballpark, the Philadelphia Phillies came out swinging against the powerful New York Yankees.

Bryce Harper and J.T. Realmuto homered to back Zack Wheeler and lead the “visiting” Phillies to an 11-7 victory over the Yankees, snapping New York’s seven-game winning streak in the opener of a seven-inning doubleheader in Philadelphia on Wednesday. 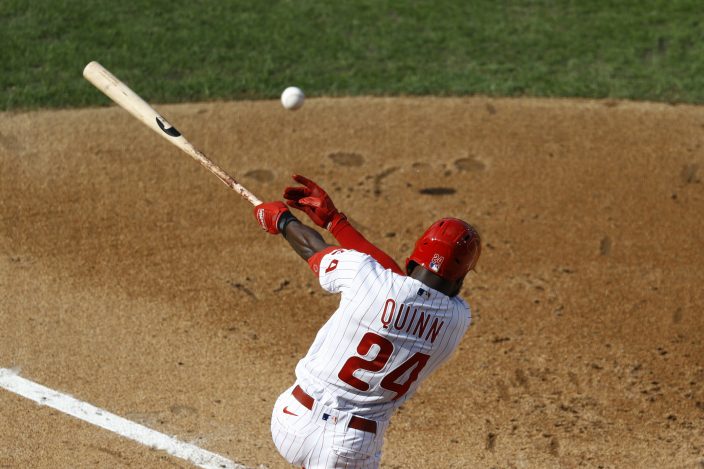 “It's a tough lineup,” Wheeler said. “You have to make pitches and execute.”

Aaron Judge hit his seventh homer in just the 10th game of the season for the Yankees, who made the Phillies turn to closer Hector Neris for the final out after taking an eight-run lead into the last inning.

New York beat the Phillies 6-3 Monday night in the Bronx but rain postponed Tuesday’s game, forcing the teams to play a home-and-home twin bill in Philly. 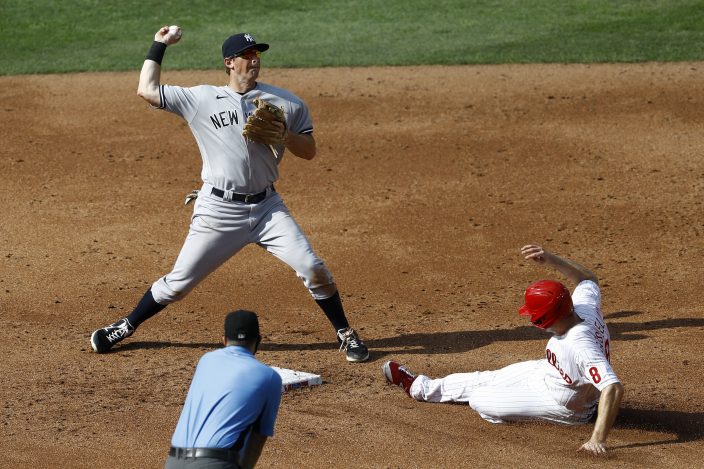 The Yankees wore their road gray uniforms and sat in the visitor’s clubhouse. A hype video for the Yankees played on the video screen before the game.

When they took the field, the public address announcer said: “Your New York Yankees.” Phillies fans standing outside the stadium beyond center field booed that announcement.

Yankees hitters also heard their walk-up music when they came to the plate. 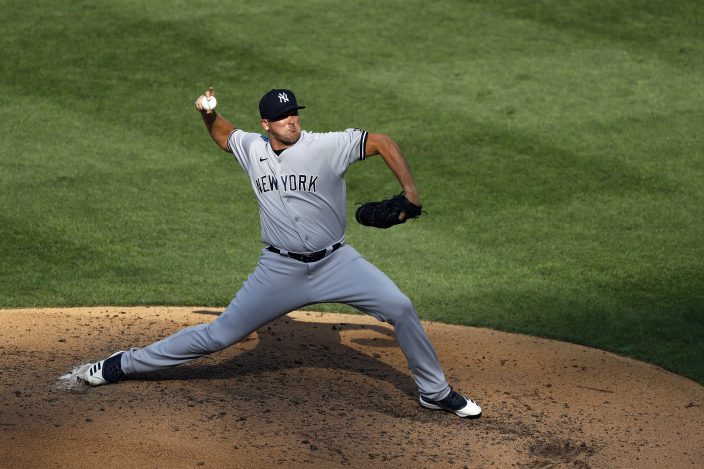 The Phillies played just their fifth game of the season and second after being forced to wait seven days following a COVID-19 outbreak among the Marlins that started opening weekend in Philadelphia.

Yankees lefty J.A. Happ (0-1) gave up four runs on three hits and six walks in three innings in his first career loss vs. the Phillies. Happ entered 5-0 with a 1.45 ERA against his former team.

“I tried to be aggressive throughout, maybe try a little too hard,” Happ said. "Made some pitches and didn’t get the benefit of a doubt. I have to make them put the ball in play. I have to force the issue better than I did.” 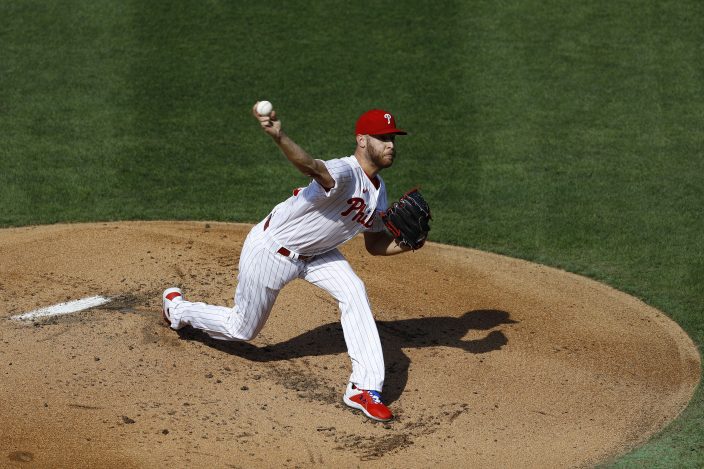 Even though fans aren’t permitted in the ballpark, they made plenty of noise from the streets. Someone rang a cowbell and another person played the drums on and off for a few innings, including nonstop for several minutes in the fifth.

“You hear them,” Wheeler said. “It's pretty cool.”

After Brett Gardner lined a two-run homer to right on an 0-2 pitch in the second to give the Yankees a 3-0 lead, Happ lost control in the third. Philadelphia Phillies shortstop Jean Segura (2) throws to first base past New York Yankees' DJ LeMahieu (26) on a fielder's choice hit by Aaron Judge during the first inning of the first baseball game in doubleheader, Wednesday, Aug. 5, 2020, in Philadelphia. LeMahieu and Judge were safe after a fielding error by Segura. (AP PhotoMatt Slocum)

Happ walked Andrew McCutchen and Harper hit a two-run shot on an 0-2 pitch one out later. Happ then walked Realmuto, allowed a bloop single to Jean Segura and walked Scott Kingery. He walked Phil Gosselin to force in a run and Roman Quinn’s grounder drove in another run to give the Phillies a 4-3 lead.

Realmuto connected off Nick Nelson in the fifth to extend the lead to 5-3. The Phillies then scored six runs off Nelson in the sixth to put it away. Rhys Hoskins, Realmuto, Kingery and Didi Gregorius each had RBI singles before Luis Cessa replaced Nelson.

Judge launched a three-run shot off lefty Austin Davis in a four-run seventh. Neris entered the game to retire Miguel Andújar with two on for his first save. 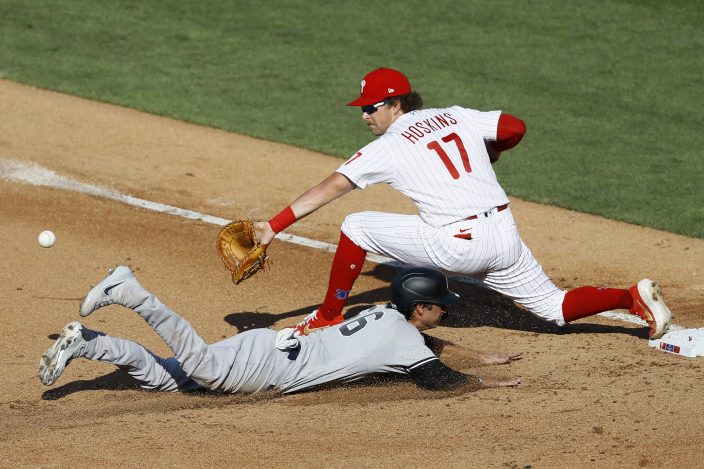 New York Yankees' Kyle Higashioka, bottom, is forced out at first by Philadelphia Phillies first baseman Rhys Hoskins after a popout by Brett Gardner during the fourth inning of the first baseball game in doubleheader, Wednesday, Aug. 5, 2020, in Philadelphia. (AP PhotoMatt Slocum)

“Look, it’s a different game once it gets to where it was," Yankees manager Aaron Boone said. "I’m glad with the competitive at-bats we had.”

Yankees third base coach Phil Nevin was ejected by plate umpire Angel Hernandez after arguing a called third strike on Mike Ford with one out in the seventh. 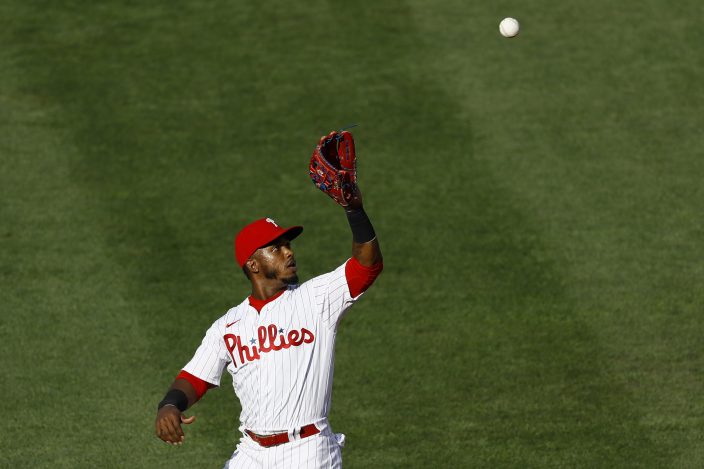 Philadelphia Phillies shortstop Jean Segura catches a popout by New York Yankees' Brett Gardner during the fourth inning of the first baseball game in doubleheader, Wednesday, Aug. 5, 2020, in Philadelphia. Segura turned a double play after throwing Kyle Higashioka out at first base on the play. (AP PhotoMatt Slocum)

The Phillies are placing cardboard cutouts of players in the seats where their home runs land. A cutout of Harper was quickly added in the right-center field stands after he connected.

Yankees: Closer Aroldis Chapman, who tested positive for COVID-19 last month, was scheduled to throw a bullpen on Wednesday. It’s uncertain when the lefty will be activated. ... Cessa was reinstated from the 10-day injured list. The righty tested positive for COVID-19 before camp opened. ... RHP Tommy Kahnle had Tommy John surgery Tuesday. The procedure was performed by Dr. Christopher Ahmad at New York-Presbyterian Hospital. ... Andújar made his first appearance at third base in the regular season since shoulder surgery on May 20 last year.

Phillies: RHP Seranthony Domínguez finally had Tommy John surgery on his right elbow last Thursday. Dominguez had to wait for surgery because of the coronavirus pandemic.

Phillies ace RHP Aaron Nola (0-1) was set to pitch the nightcap and RHP Jonathan Loaisiga (1-0) was slated to pitch for the Yankees.