Porcello (1-1) went seven innings, allowing one run and five hits and retiring the last 10 batters he faced. He tied David Price, the Dodgers lefty who opted out of this season because of the coronavirus pandemic, for the ninth-most wins among active pitchers.

New York's Dominic Smith drove in two runs and Luis Guillorme -- starting at second base with Robinson Canó on the injured list -- provided a go-ahead RBI single in the fourth off Scherzer’s replacement, Erick Fedde (0-1). 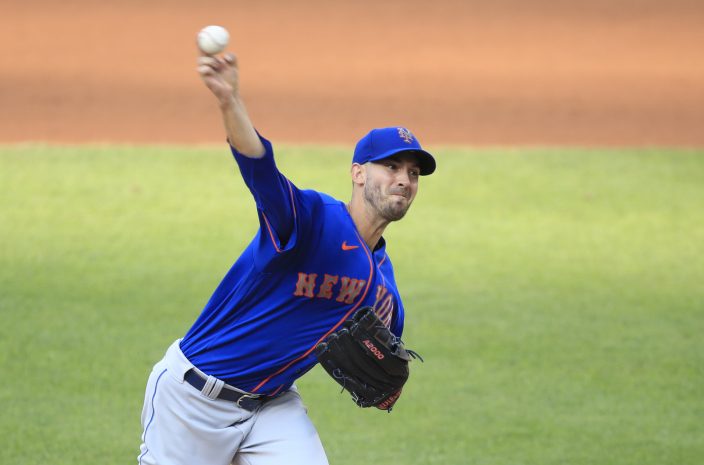 Scherzer, a three-time Cy Young Award winner, walked the game’s first batter, gave up a hit to the next and fell behind 1-0 on Smith’s sacrifice fly. Scherzer’s fastball was in the lower 90s mph and he needed 27 pitches to get through his lone inning.

Scherzer didn't return because of trouble with his right hamstring.

The Nationals already are missing World Series MVP Stephen Strasburg, who has a nerve issue in his pitching hand. 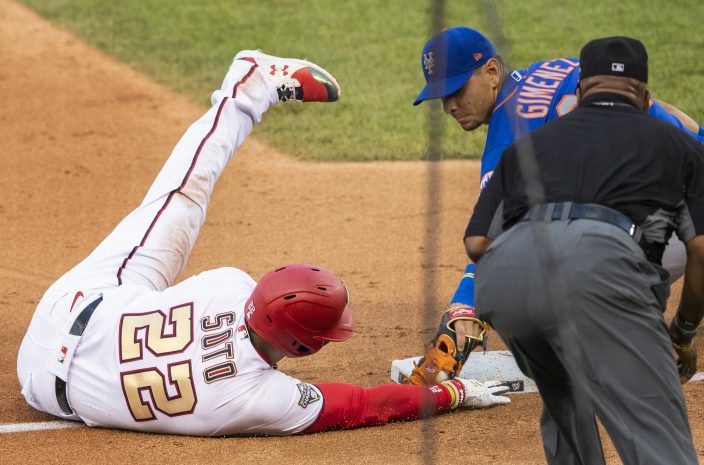 Scherzer threw 99 pitches on opening day against the Yankees, then an MLB season-high 112 in his next start. But he had an extra two days of rest after that one because the Nationals recently had a four-day layoff when their series at Miami was postponed because of the Marlins’ COVID-19 outbreak.

Soto went on the COVID-19 IL on opening day after failing a test -- he thinks it was a false positive -- and he put on quite a show Wednesday for the 16 cutouts of his family members positioned in the first few rows of the Nationals Park left-field corner.

The 21-year-old outfielder’s first official at-bat since October resulted in a run-scoring double. He singled his second time up, although he was soon tagged out when he slid off the bag trying to go first-to-third on a teammate’s hit. 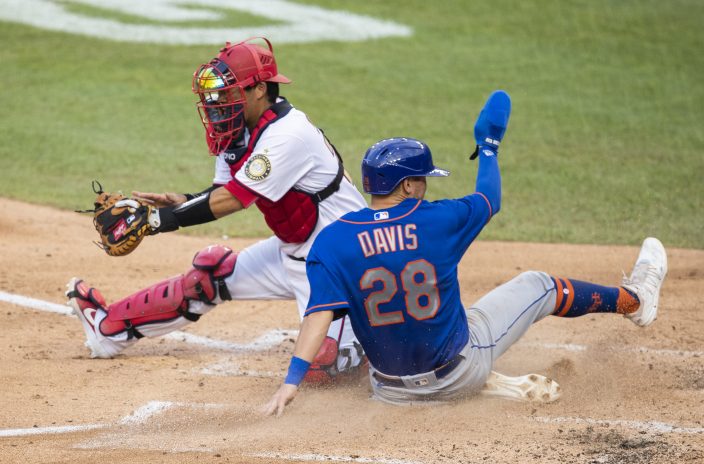 Soto also came up with a highlight-reel, cap-and-sunglasses-flying, head-first diving catch of a sinking liner off the bat of Andrés Giménez in the second.

But Soto struck out in his last at-bat to end the game, whiffing on a 97 mph high fastball from Seth Lugo, who retired all six batters he faced for his second save in four chances.

In his Mets debut, CF Billy Hamilton stole his first base of 2020 and 300th of his career.

Nationals: Strasburg was slated to throw about 45 to 50 pitches in a simulated game Wednesday afternoon, which would help the team decide when the right-hander can make his season debut.

New York designated OF Ryan Cordell for assignment, a day after he went 1 for 3 against Washington in his only start of 2020. That made room on the Mets’ 40-man roster for RHP Ariel Jurado, acquired from the Rangers for a player to be named later and cash considerations. Jurado was assigned to the team’s alternate training site.

Mets: After playing 13 games in 13 days, they get their first off-day of the season Thursday, then open a seven-game homestand Friday. They’ll host Miami for three games, Washington for four.

Nationals: After Thursday's fifth day off in a week, they start a three-game series Friday against visiting Baltimore.