North Korea declared an emergency and locked down Kaesong near the inter-Korean border in late July after finding a suspected virus case there. It hasn't confirmed yet if the person tested positive and still says the country hasn't had a single case of COVID-19, a claim questioned by outside experts.

Kim presided over a meeting Wednesday of the ruling Workers’ Party's executive policy council where they discussed a special supply of food and funds to Kaesong, the Korean Central News Agency said. The report didn't specify the measures that were to be taken. 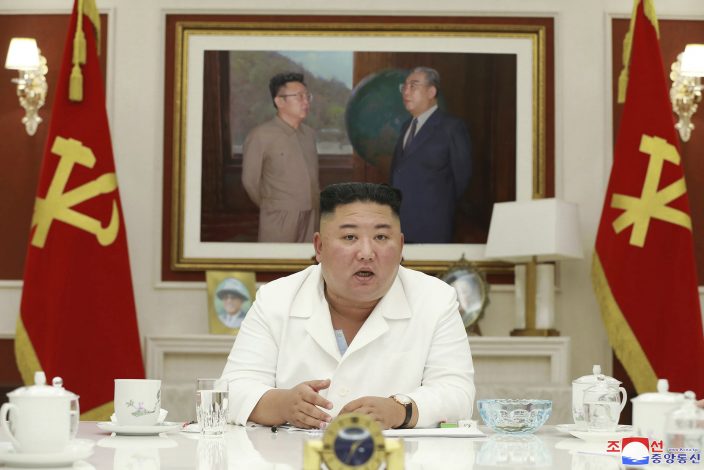 In this photo provided by the North Korean government, North Korean leader Kim Jong Un, presides over an executive policy council meeting at the ruling Workers’ Party in Pyongyang, North Korea, Wednesday, Aug. 5, 2020. Kim Jong Un directed his government agencies to act immediately to stabilize the livelihoods of residents in a city locked down over coronavirus concerns, state media reported Thursday, Aug. 6, 2020. Independent journalists were not given access to cover the event depicted in this image distributed by the North Korean government. The content of this image is as provided and cannot be independently verified. Korean language watermark on image as provided by source reads: "KCNA" which is the abbreviation for Korean Central News Agency. (Korean Central News AgencyKorea News Service via AP)

North Korea has said the suspected virus patient is a runaway who had fled to South Korea three years ago before slipping back to Kaesong last month. Some experts speculate North Korea is aiming to hold South Korea responsible for a potential virus spread in the North or try to save its face before winning aid items from the South.

Describing its anti-virus efforts as a “matter of national existence,” North Korea earlier this year shut down nearly all cross-border traffic, banned foreign tourists and mobilized health workers to quarantine anyone with symptoms. But the Kaesong lockdown is the first such known measure taken in a North Korean city to stem the pandemic.

Foreign experts say a coronavirus outbreak in North Korea could cause dire consequences because of its fragile public health care infrastructure and chronic lack of medical supplies. They are also skeptical about North Korea’s claim of having had no infections because the country shares a long, porous border with China, its biggest trading partner, where the pandemic emerged last year.

Kaesong, a city with an estimated population of 200,000, is just north of the heavily fortified land border with South Korea. It once hosted the Koreas’ jointly run industrial complex, which has been shut since 2016 amid nuclear tensions, and an inter-Korean liaison office North Korea demolished earlier this year.