Hyun-Jin Ryu combined with four relievers on a two-hitter and the Toronto Blue Jays beat the shorthanded Atlanta Braves 2-1 on Wednesday night.

Ryu lasted only five innings but was dominant as he gave up only one hit, an infield single by Adam Duvall in the second.

Duvall homered in the seventh off Thomas Hatch. 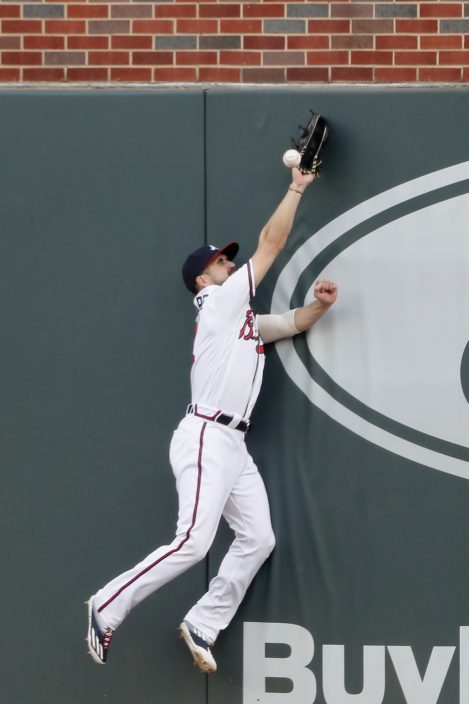 Anthony Bass issued a one-out walk in the ninth to Marcell Ozuna, who moved to second on Travis d’Arnaud’s single to left field. Duvall hit into a double play to end the game as Bass earned his second save.

Ryu (1-1) struck out eight as he showed the form that produced a majors-leading 2.32 ERA for the Dodgers in 2019. The left-hander from South Korea had an 8.00 ERA in his first two starts for Toronto.

Ryu signed a four-year, $80 million contract with the Blue Jays in December. 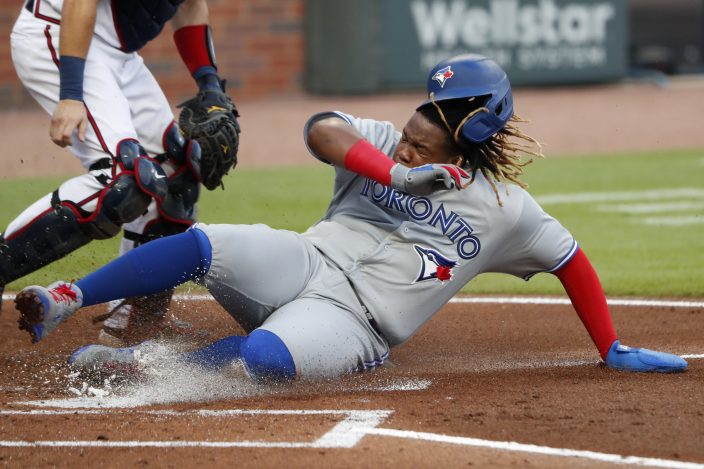 Toronto Blue Jays' Vladimir Guerrero Jr. scores on a sacrifice fly by Danny Jansen in the second inning of a baseball game against the Atlanta Braves Wednesday, Aug. 5, 2020, in Atlanta. (AP PhotoJohn Bazemore)

The Braves were forced to recast their lineup after placing Ozzie Albies and Matt Adams on the injured list and giving Freddie Freeman a day off.

The new-look lineup, which included Charlie Culberson at second base and Austin Riley at first base, didn't resemble the unit which had 13 hits in a 10-1 win over the Blue Jays on Tuesday night.

Toronto took a 1-0 lead in the second when Vladimir Guerrero Jr. doubled just beyond Ender Inciarte's leaping attempt at a catch at the center-field wall. Guerrero scored from third on Danny Jansen's fly ball to right field. 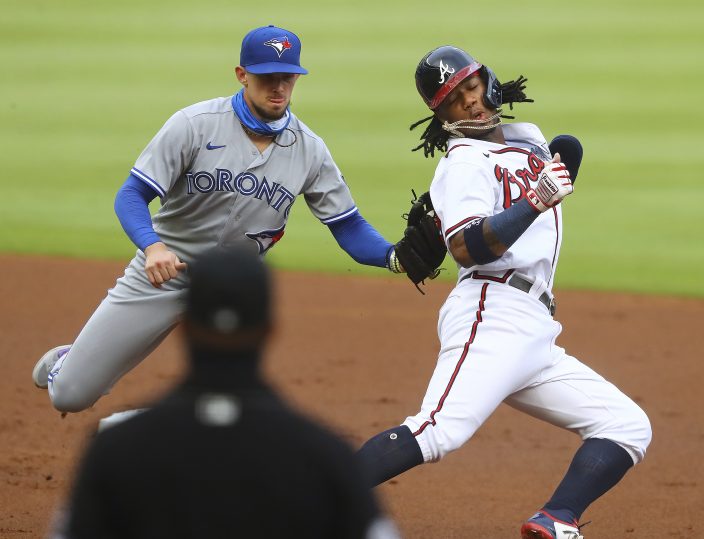 Toronto Blue Jays Cavan Biggio tags Atlanta Braves baserunner Ronald Acuna out in a run down as he is caught off base attempting to steal second during the first inning in a baseball game on Wednesday, Aug. 5, 2020, in Atlanta. (Curtis ComptonAtlanta Journal-Constitution via AP)

Bo Bichette singled, stole second and scored on Cavan Biggio's single in the fifth. The run-scoring hit by Biggio knocked Sean Newcomb (0-1) out of the game after the left-hander allowed five hits and two runs in 4 2/3 innings.

Before Duvall's homer in the seventh, Travis d'Arnaud's drive to left field was caught at the wall by Lourdes Gurriel Jr.

Left-hander Ryan Borucki then struck out Freeman, who was pinch-hitting for Riley. Right-hander Jordan Romano struck out Ronald Acuña Jr. to cap a perfect eighth. 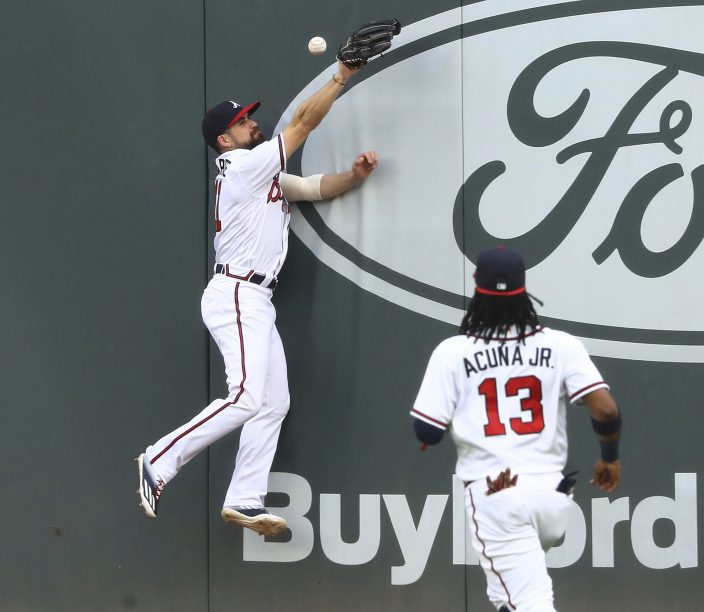 Blue Jays: OF Derek Fisher (left quad strain) was placed on the 10-day IL and OF Billy McKinney was recalled before the game. ... INF Travis Shaw, who was activated on Tuesday after being placed on family medical leave on July 27, was given another day out of the lineup to take batting practice and possibly be available as a pinch-hitter. ... Manager Charlie Montoyo said “there's a good chance” RHP Chase Anderson (oblique) will pitch in relief, at least initially, when he returns from the IL.

Braves: Albies (right wrist bone bruise) and Adams (left hamstring strain) were placed on the 10-day injured list. Albies will be shut down for a week in hopes he won't miss more than 10 days. OF Nick Markakis was reinstated from the restricted list and grounded out to first base as a pinch-hitter in the eighth. C Alex Jackson was recalled from the team's alternate training site. 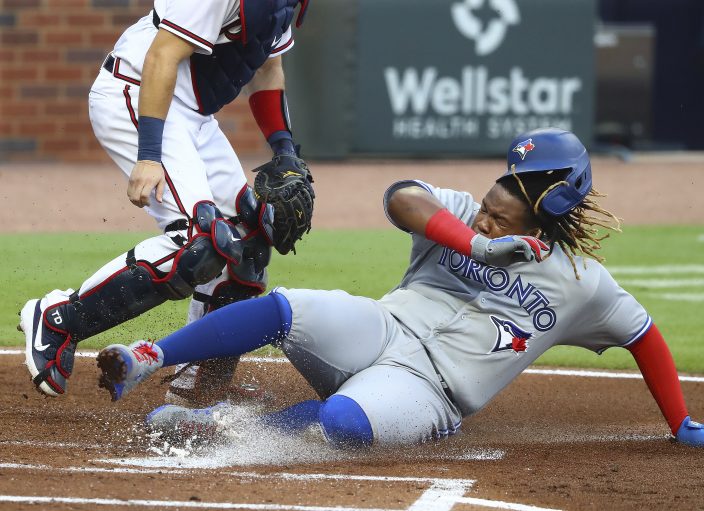 After throwing five scoreless innings against Washington in his debut on July 29, Blue Jays RHP Nate Pearson will try again for his first win in his second major league start when he faces Atlanta's Touki Toussaint (0-0) in Thursday night's final game of the three-game series. 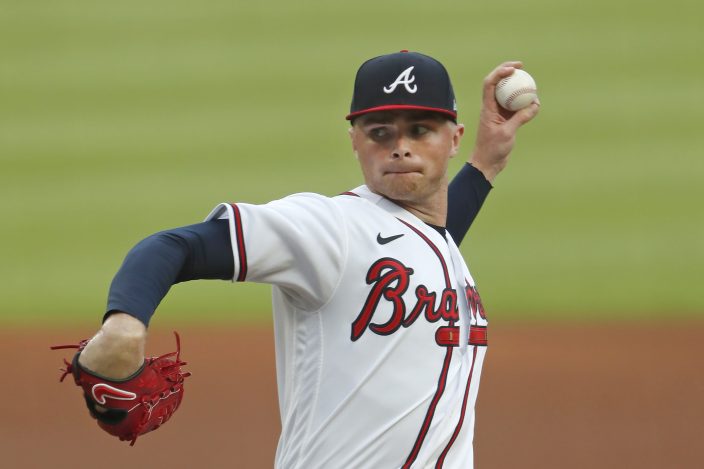 For the fourth time in five season ...