The U.N. Security Council discussed disputed Kashmir at Pakistan's request Wednesday for the third time since India’s Hindu nationalist government decided to end the Muslim-majority region’s semi-autonomy a year ago.

The U.N.’s most powerful body did not take any action or issue a statement after the virtual meeting behind closed doors.

Nonetheless, Pakistan’s Foreign Minister Shah Mahmood Qureshi said afterward that holding the meeting signified “that Jammu and Kashmir is an international dispute firmly on the agenda of the Security Council and has nullified, yet another time, the Indian self-serving claim that it is an ‘internal matter.’” 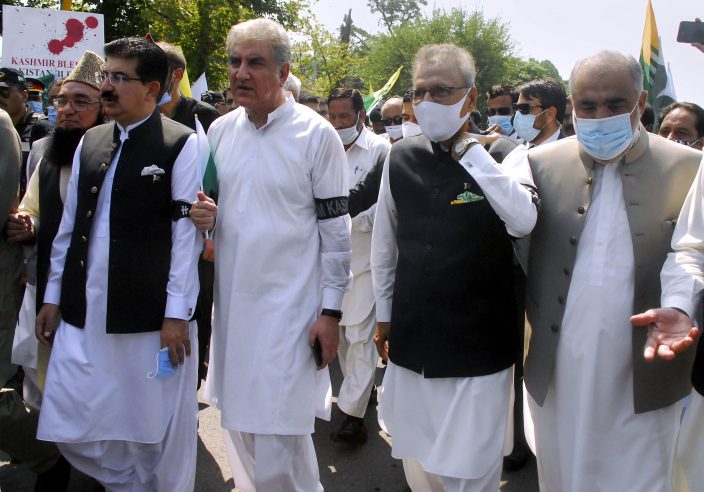 Qureshi said in remarks circulated by Pakistan’s U.N. Mission that the international community “should exercise its moral, legal and political authority to call out India to reverse the tide of impunity and stop genocide of the Kashmiri people.”

The Pakistani minister expressed gratitude to the 15 Security Council members, especially China, for their support in organizing the meeting in the face of India’s “desperate attempts to prevent this discussion.” When it went ahead, Qureshi said India tried “to minimize the importance and significance of the meeting.”

“In today’s meeting of UN Security Council which was closed, informal, not recorded and without any outcome, almost all countries underlined that J&K (Jammu and Kashmir) was bilateral issue & did not deserve time and attention of Council,” he wrote.

Kashmir became an issue at the end of British colonial rule in 1947 when the Indian subcontinent was divided into predominantly Hindu India and mainly Muslim Pakistan and its future was left unresolved. India and Pakistan have fought two of their three wars over control of Kashmir, which had been a Muslim-majority kingdom ruled by a Hindu maharaja.

The first war ended in 1948 with a U.N.-brokered cease-fire that left Kashmir divided, with the promise of a U.N.-sponsored referendum on its “final disposition” that has never been held.

The U.N. sent military observers to supervise the cease-fire in January 1949 and, following renewed hostilities in 1971, the U.N. mission has remained in the area to observe and report to the secretary-general — not to the Security Council as other peacekeeping missions do.

The Security Council held its first closed consultations on Kashmir since 1971 following India’s surprise action in August 2019 to change the Himalayan region’s status.

India accuses Pakistan of arming and training insurgents fighting for Kashmir’s independence from India or its merger with Pakistan. Pakistan denies the charge and says it offers only diplomatic and moral support to the rebels.