A bright side for plant nurseries of Melbourne’s first pandemic stay-at-home order was that many householders took the time to garden. But the latest lockdown in Australia’s second-largest city is far tougher.

More than 250,000 people were thrown out of work on Thursday. Those whose jobs are deemed essential need government-issued permits to travel the near-empty streets of a virtual ghost town to get to their jobs.

The rolling restrictions have created confusion and uncertainly in a population navigating Australia’s toughest-ever lockdown that makes mask-wearing compulsory and imposes an 8 p.m.-to-5 a.m. curfew. A restaurant prepares delivery meal orders during lockdown due to the continuing spread of the coronavirus in Melbourne, Thursday, Aug. 6, 2020. Victoria state, Australia's coronavirus hot spot, announced on Monday that businesses will be closed and scaled down in a bid to curb the spread of the virus. (AP PhotoAndy Brownbill)

“The first time, everybody went: ‘Oh my god!’ and then everything turned out to be fine,” Collings said.

“Gardening was one of the few things you could do at home, so nurseries did well for three or four months ... but it has a totally different feel this time,” he added. 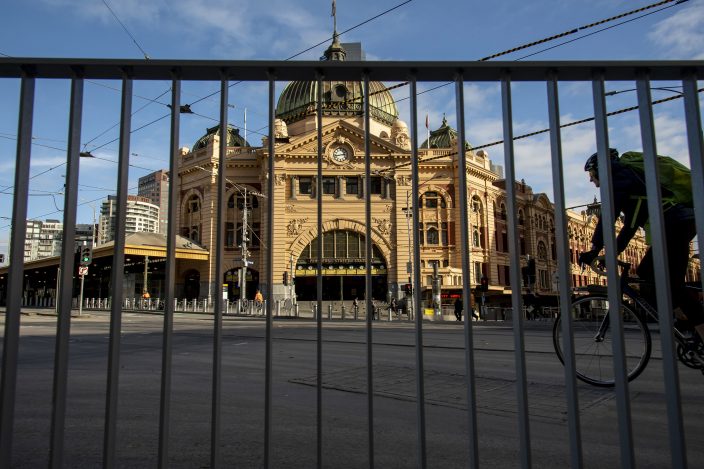 A cyclists passes an empty Flinders Street Station during lockdown due to the continuing spread of the coronavirus in Melbourne, Thursday, Aug. 6, 2020. Victoria state, Australia's coronavirus hot spot, announced on Monday that businesses will be closed and scaled down in a bid to curb the spread of the virus. (AP PhotoAndy Brownbill)

Customers can order deliveries or buy online and collect but cannot enter a range of businesses including nurseries.

John van der Horst, who also owns a Melbourne nursery, said the new shopping restrictions had “changed things dramatically.” The real economic pain to nurseries is expected to come in September with the Southern Hemisphere spring.

“Right at the moment (business) is slow and might be confusing, but I think that will take a day or so to sort out and things will move on, but clearly the business is not going to be the same through this lockdown,” van der Horst. 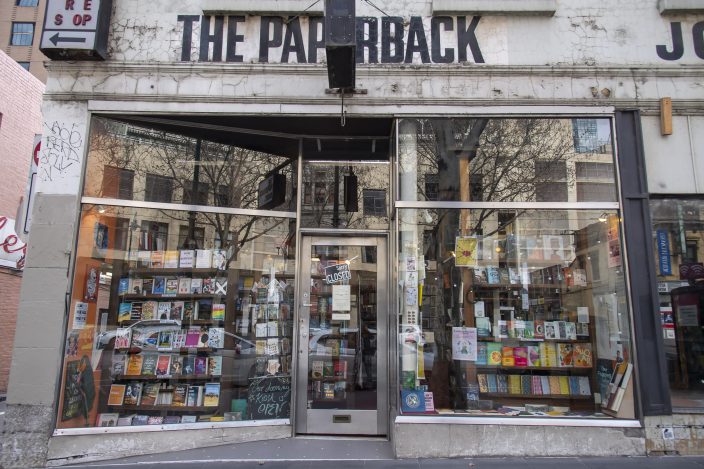 The Paperback bookstore sits closed during lockdown due to the continuing spread of the coronavirus in Melbourne, Thursday, Aug. 6, 2020. Victoria state, Australia's coronavirus hot spot, announced on Monday that businesses will be closed and scaled down in a bid to curb the spread of the virus. (AP PhotoAndy Brownbill)

Downtown bookshop owner Bill Mort also offers a service known as click-and-collect, in which customers buy at a website then collect from the store since his door was forced to close on Thursday. But there is some uncertainty about whether a desire for a book is reason enough to justify leaving home under the latest pandemic rules.

“There’s a gray area or a question as to whether buying a book is necessary or not and a number of booksellers are grappling with the click-and-collect ... aspect of this,” Mort said.

“I think there’s a fair amount of room for interpretation within these restriction guidelines,” he added. 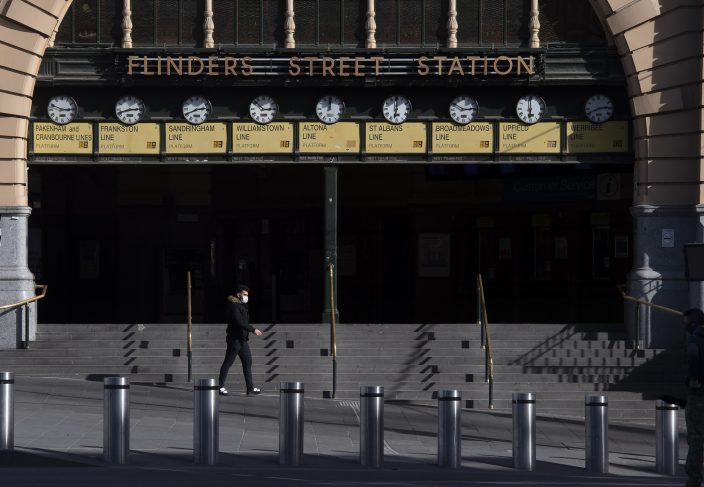 Flinders Street Station is quiet during lockdown due to the continuing spread of the coronavirus in Melbourne, Thursday, Aug. 6, 2020. Victoria state, Australia's coronavirus hot spot, announced on Monday that businesses will be closed and scaled down in a bid to curb the spread of the virus. (AP PhotoAndy Brownbill)

The Melbourne lockdown is not only hitting the local economy. Melbourne usually accounts for a quarter of Australia’s economic activity. Prime Minister Scott Morrison said Thursday that the lockdown, which extends across Victoria state but is less restrictive beyond Melbourne, was expected to cost the national economy up to 9 billion Australian dollars ($6.5 billion) in the September quarter.

The government forecast the lockdown would push up Australia’s underlying unemployment — that’s what the unemployment rate would be if the government wasn’t paying employers to retain staff — from just over 11% to almost 14%.

“This is a heavy blow. A heavy blow,” Morrison said.

The lockdown and the worsening situation in Victoria compared to the rest of the country — largely free of COVID-19 community spread — is taking a toll on residents' welfare.

The contrast between Melbourne and the rest of Australia could hardly be starker. Victoria set a new daily record of 725 new cases on Wednesday. Elsewhere in Australia, only 14 new infections were found.

After enduring a second lockdown of four weeks, tougher restrictions have been imposed on Melbourne residents for another six weeks.

Beyond Blue, an independent mental health support organization, reported a 20% increase in Victorians contacting its coronavirus support service in the past two months. Around two-thirds of contacts from around Australia now come from Victoria, with isolation and loneliness the main problems.

Community anxiety became apparent on Wednesday when social media spread panicked resignation rumors about Victoria’s Chief Health Officer Brett Sutton, whose calm demeanor during television interviews on the pandemic have endeared him to many and earned him a type of celebrity status.

Victoria Premier Daniel Andrews was called on Thursday to deny that Sutton had offered his resignation.

“He’s having three days off. Nothing more, nothing less,” Andrews told reporters.

The premier also urged against panic-buying as he announced reductions in meat production across Victoria from late Friday.

“You may not necessarily be able to get exactly the cut of meat that you want, but you will get what you need,” Andrews said.

“The only supply issue is when people panic buy and stock up. If everyone buys what they need, everything will be fine,” Bouchier said.

“We don’t know until it happens and they lose a third of their production what effect it will have, but if everyone takes it easy — it's only Victoria, it’s not New South Wales or South Australia, and a lot of meat comes in from there,” he added.

For many businesses, including Mort’s bookshop, the economic pain is not expected to end in six weeks when the restrictions are relaxed.

His business has relied for five decades on foot traffic on once-busy streets. Many of his customers now work from home, if they still have jobs.

“We don’t know yet when officer workers and people who work in the C.B.D will return,” Mort said, referring to the central business district.

“It’ll certainly be before this lockdown ceases and it may not be for many, many months,” he added.