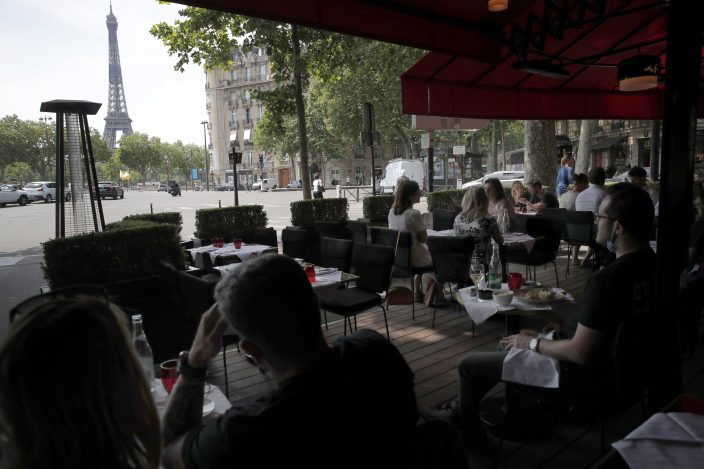 People enjoy a lunch on a terrace of the restaurant Chez Francis, in Paris, Wednesday, June 3, 2020. Parisians who have been cooped up for months with take-out food and coffee will be able to savor their steaks tartare in the fresh air and cobbled streets of the City of Light once more, albeit in smaller numbers. (AP PhotoChristophe Ena)

RACIAL INJUSTICE-TEAR GAS — During the nationwide Black Lives Matter protests, law enforcement agencies have increasingly been using tear gas — traditionally used as a measure of last resort — offensively. Law enforcement officials say the gases are effective tools for crowd control and are safe. But despite its widespread use, there are few studies on the health effects of tear gas. The AP also found that there is no oversight of the use and manufacture of tear gas. By Andrew Selsky. SENT: 2,400 words, photos, video. An abridged version of 1,050 words is available.

VIRUS OUTBREAK-MIGRANT CHILDREN — More than 2,000 unaccompanied children have been expelled from the United States since March under an emergency declaration enacted by the Trump administration, which has cited the coronavirus in refusing to provide them protections under federal anti-trafficking and asylum laws. By Nomaan Merchant. SENT: 1,230 words, photos. 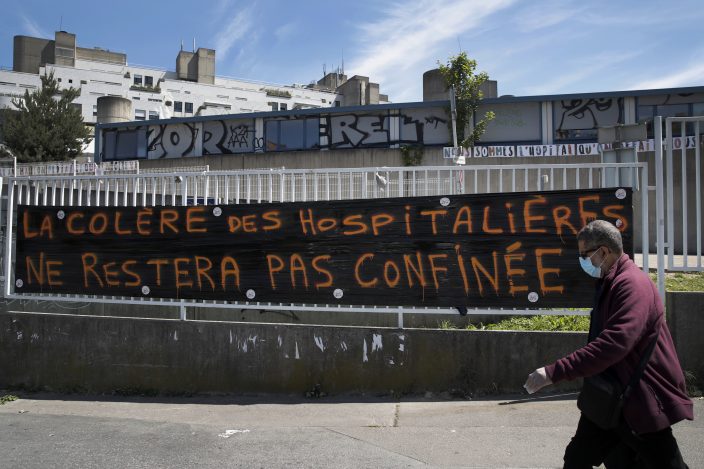 A man walks past a banner reading: Anger of hospital workers will not stay lockdowned, in front of the Debre hospital in Paris, Monday, May 18, 2020. French nurses and doctors faced off with President Emmanuel Macron at a leading Paris hospital Friday, demanding better pay and a rethink of a once-renowned public health system that found itself quickly overwhelmed by tens of thousands of virus patients. (AP PhotoChristophe Ena)

LEBANON-DEVASTATED-BEIRUT — The single, horrific instant hit people across Beirut with the same blunt force: First, they watched a heavy fire down by the Lebanese capital’s port sending a pall of smoke into the air. Then with a stupendous mushroom cloud, a wave of destructive energy suddenly raced across the city at them like a freight train. By Sarah El Deeb and Bassem Mroue. SENT: 1,040 words, photos. With LEBANON-WORLD-REACTION; LEBANON-THE-LATEST. Also see LEBANON-US RISKS below. 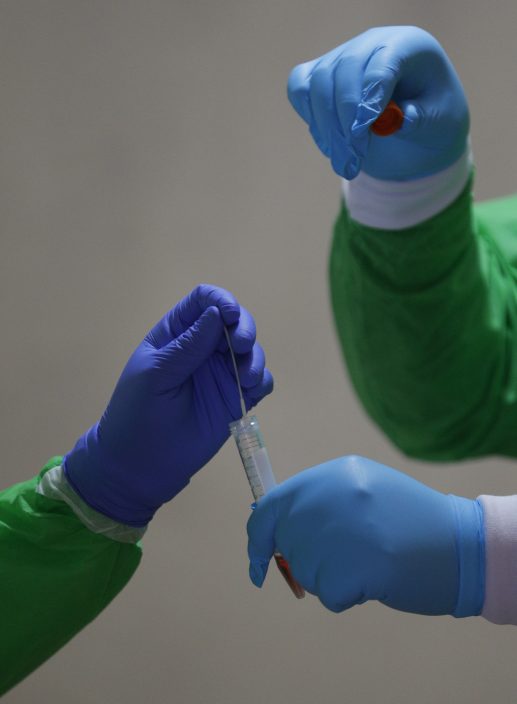 NKOREA-VIRUS-LOCKDOWN — North Korea is quarantining thousands of people and shipping food and other aid to a southern city locked down over coronavirus worries, officials say, as the country’s response to a suspected case reinforces doubt about its longstanding claim to be virus-free. By Hyung-Jin Kim. SENT: 850 words, photos. With VIRUS OUTBREAK-THE LATEST.

MEDICAID EXPANSION — President Donald Trump is still trying to overturn “Obamacare,” but his predecessor’s health care law keeps gaining ground in places where it was once unwelcome. Missouri voters this week approved Medicaid expansion, making the conservative state the seventh to do so under Trump. By Ricardo Alonso-Zaldivar. SENT: 740 words, photo.

ELECTION 2020-BASS-FLORIDA — California congresswoman Karen Bass is on the short list of running mates for Democrat Joe Biden. But her past remarks eulogizing the late Cuban leader Fidel Castro could derail her chances because of a crucial voting bloc in Florida. By Adriana Gomez Licon and Bobby Caina Calvan. SENT: 980 words, photo. 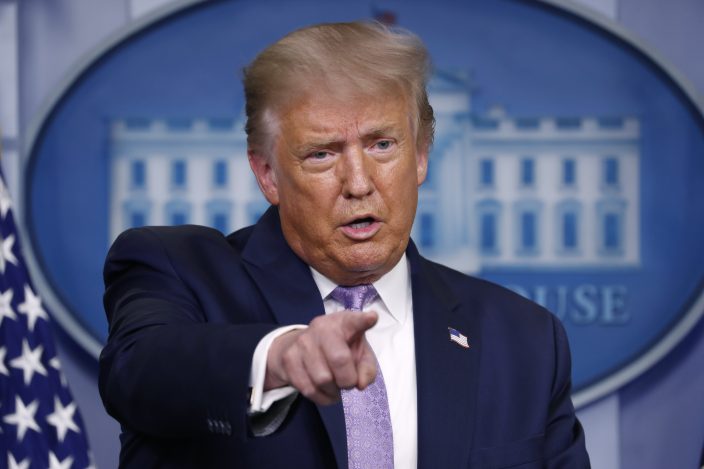 President Donald Trump speaks during a briefing with reporters in the James Brady Press Briefing Room of the White House, Wednesday, Aug. 5, 2020, in Washington. Trump said Wednesday he would "listen to both sides" after his eldest son and a campaign adviser urged him to intervene to block a proposed copper and gold mine in Alaska's Bristol Bay region. (AP PhotoAndrew Harnik)

JAPAN-HIROSHIMA ANNIVERSARY — Survivors of the world’s first atomic bombing gather in diminished numbers near an iconic, blasted dome to mark the attack’s 75th anniversary, many of them urging the world, and their own government, to do more to ban nuclear weapons. By Mari Yamaguchi. SENT: 870 words, photos. With JAPAN-HIROSHIMA-ANNIVERSARY-Q&A.

POLAND-LGBT-EMIGRATION — Some lesbian, gay, bisexual and transgender people are leaving Poland following the anti-LGBT campaign rhetoric the country’s president used during his successful reelection campaign and other leaders promoted before that. By Vanessa Gera. SENT: 1,000 words, photos. 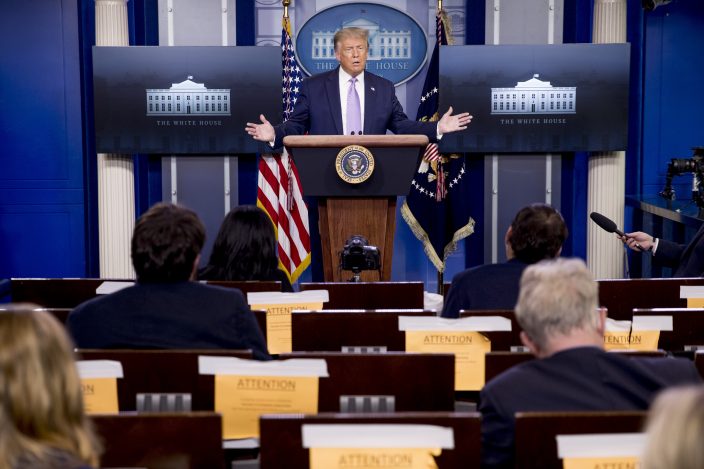 VIRUS OUTBREAK-CONGRESS — Negotiators on a huge COVID-19 response bill are still stuck, but still trying after more than a week’s worth of meetings. SENT: 940 words, photos.

VIRUS OUTBREAK-ASIA — A governor in central Japan announces a state of emergency due to rising virus cases and asked businesses and people to curb their activities, especially during an upcoming holiday. SENT: 770 words, photos.

VIRUS OUTBREAK-CALIFORNIA — California has stopped removing or adding to a list of counties facing more restrictions on businesses and schools as it tries to resolve a technical problem with the state’s coronavirus testing database, health officials say. SENT: 790 words, photos.

VIRUS-OUTBREAK-VIRAL-QUESTIONS-SCHOOLS — Is it safe for schools to reopen during the pandemic? It depends on how widespread COVID-19 infections are in the community and the safety measures the school takes. SENT: 430 words, graphic.

AP-INTERVIEW-CLYBURN — Rep. James Clyburn says the COVID-19 crisis is “much, much worse” than the 2008 Great Recession because the U.S. is without a national strategy to contain the coronavirus. By Lisa Mascaro and Padmananda Rama. SENT: 750 words, photos, video.

ELECTION 2020-FUNDRAISING — Donald Trump takes in $165 million for his reelection effort in the month of July, a sum that that surpasses what his Democratic rival, Joe Biden, raised during the same period. SENT: 350 words, photos.

SUPREME COURT-THOMAS — Supreme Court Justice Clarence Thomas has never been afraid to turn right when his colleagues turn left, or in any direction really as long as there’s a place to plug in his 40-foot refitted tour bus. SENT: 720 words, photo.

UNIVERSITY-OF-UTAH-SHOOTING — A group of University of Utah police officers made inappropriate comments about explicit photos of a student who had submitted the pictures as evidence in an extortion case shortly before her shooting death, an investigation finds. SENT: 500 words, photo.

LEBANON-US RISKS — A massive explosion in the Lebanese capital is bringing back sorrowful memories for people in a rural Texas town that was partly leveled by a similar ammonium nitrate blast in 2013. SENT: 910 words, photos.

NEW-ZEALAND-BRITISH-TOURIST-MURDER-TRIAL — A New Zealand man found guilty of murdering a British backpacker appeals his conviction and punishment, with his new lawyer arguing he didn’t get a fair trial and his sentence was too harsh. SENT: 280 words, photos.

ELECTRONIC DRIVING-SAFETY — Two tests by AAA during the past two years show that partially automated driving systems don’t always function properly, so the auto club is recommending that car companies limit their use. By Auto Writer Tom Krisher. SENT: 670 words.

FINANCIAL-MARKETS — Stocks were mixed in Asia as investors watched to see if lawmakers will come ahead with fresh stimulus for a U.S. economy struggling with shutdowns as new coronavirus outbreaks flare. By Business Writer Elaine Kurtenbach. SENT: 720 words, photos.

JAPAN-EARNS-TOYOTA — Toyota’s profit plunges 74% in the last quarter as the coronavirus pandemic sank vehicle sales to about half of what the top Japanese automaker sold the previous year. By Business Writer Yuri Kageyama. SENT: 460 words, photos.

Hospitals in the Paris and Marseil ...