With virus cases rising anew, France is struggling to administer enough tests to keep up with demand. One reason: Many testing labs are closed so that their staff can take summer vacation, just as signs of a second wave are building.

Doctors and experts say the vacation crunch is just part of a larger web of failures in France’s testing strategy – a strategy that even the government’s own virus advisory panel this week called disorganized and “insufficient.”

“First, there is a lack of workers to do the testing. If we don’t ask all the health workers to be available by mobilizing all of them, there are just not enough people,” emergency services doctor Christophe Prudhomme told The Associated Press at his hospital in the Paris suburb of Bobigny. 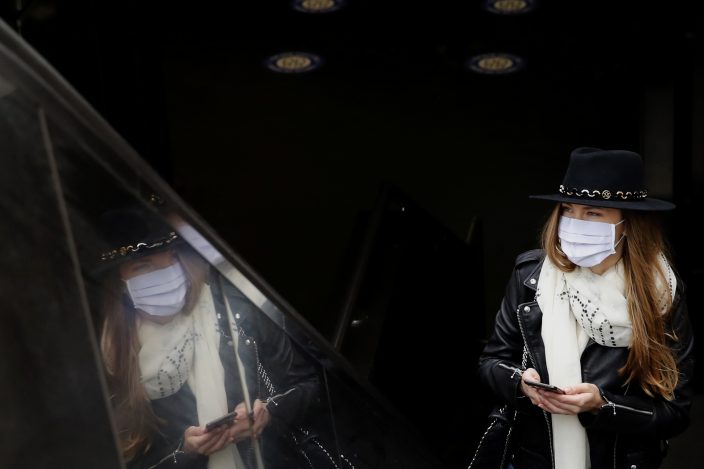 A woman leaves a subway station on the Champs Elysee, in Paris, Monday, May 11, 2020. The French began leaving their homes and apartments for the first time in two months without permission slips as the country cautiously lifted its lockdown. Clothing stores, coiffures and other businesses large and small were reopening on Monday with strict precautions to keep the coronavirus at bay. (AP PhotoChristophe Ena)

“And then it’s a matter of organization,” he said, urging regional health agencies “to organize testing so that it’s not the citizen who has to take his phone and try to call seven or eight labs in order to get an appointment that will take place only next week.”

Testing troubles have plagued the U.S. and other countries too. But France's August ritual of fleeing cities for weeks of holiday rest on seashores, mountainsides or grandma’s country house is an added tangle. “Closed for vacation” signs dangle from door after door across Paris this month, from bakeries to shoe shops and iconic cafes.

Doctor’s offices and labs are no exception. Their staff need a rest more than ever this difficult year. And with Parisians vacationing in the provinces, demand for medical services usually plunges in the summer. 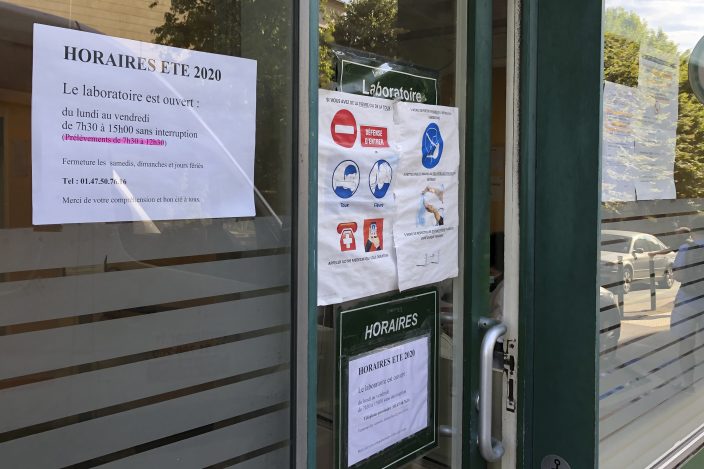 A poster, left, shows special summer opening hours at a medical laboratory Thursday, Aug.6, 2020 in Ville d'array, west of Paris. With virus cases rising anew, France is struggling to administer enough tests to keep up with demand. One reason: Many testing labs are closed so that their staff can take summer vacation, just as signs of a second wave build. (AP PhotoBertrand Combaldieu)

But this August, socially distanced lines snake outside the scattered Paris labs that remain open, from the Left Bank to the city’s northern canals. Trying to get a test appointment can take a week or more. So can getting results.

That’s worrying news in a country that saw renowned hospitals nearly drown with virus patients in the first wave – in part because of inadequate testing — and has already lost more than 30,000 lives to the pandemic.

Two months of strict lockdown and soul-searching about France’s early mistakes seemed to put the country on track to vanquish COVID-19. But now it’s again recording more than 1,000 new cases a day, and the number of patients in intensive care units is edging up, for the first time in months.

France is in better shape than last time to keep ahead of new infections — but testing is key.

“The virus didn’t disappear at all. ... The contamination is continuing, and amplifying in some regions,” said François Blanchecotte, president of the Union of Medical Biologists, who has been in the forefront of French testing efforts. “We have to adapt the testing strategy to this evolution.”

He argues for a more targeted policy that takes into account lab capacities, such as organizing tests at beach resorts or tourist sites where young people are congregating.

He’s particularly annoyed at a blanket government campaign to test 1.5 million Parisians to better understand how the virus is spreading. The free test vouchers were distributed just as dozens of labs shut down for vacation, worsening bottlenecks.

“We are at a crossroads. We’ve seen a situation of disorder in Paris, in which labs were not ready to face thousands of people at the same time. It’s a nightmare to get an appointment,” Blanchecotte said.

That was too late to stop an outbreak in the town of Quiberon in the western region of Brittany, unleashed by a night club party last month. Authorities urged everyone in the area to get tested — a mammoth task on a peninsula where the population swells from 5,000 to 60,000 in the summer. Some partygoers were foiled by long lines at a makeshift testing station, and gave up. And the virus spread on.

In Paris, City Hall is trying to relieve the summer strain on labs with a mobile testing site at a beach venue on the La Villette canal, where crowds lined up Wednesday even before it opened.

Noemie Maoso wants to ensure she’s virus-free before heading on a trip to Ireland with her daughter. “I’m going to do it to be serene during my trip,” she said. Another woman who needs a test to go to Greece to work on a farm couldn’t get an appointment last month, so tried her luck again on Wednesday.

Some labs have adjusted their hours to stay open late into the evening, or open on Sundays – both unusual for France.

After coming under fire for its limited testing capacity in the first wave, the government now says it can test up to 700,000 people a week, and hit a record high of 581,000 tests over the past week

But the number of new positive cases is growing twice as fast as the growth in test rates, according to data from the national health agency.

Blanchecotte is worried, but defended the decision to let lab staff take holiday time. For months, they worked overtime to keep up with virus testing needs, he said. Some staggered holiday departures or scaled back vacation plans.

And autumn may be even worse.

“We know that September, October, November are difficult months,” he warned. “We need to be prepared.”

'This is a big moment:' UK government caution ...