Two children and their parents clung to their overturned boat in the Gulf of Mexico until the Coast Guard could rescue them Wednesday afternoon.

The children, aged 8 and 11, and their parents all were in good shape when they were rescued, Petty Officer Sydney Phoenix said.

The family called in by radio on Wednesday morning to say their 20-foot-long (6-meter-long) boat was taking on water in the Gulf of Mexico off the coast of Venice, Louisiana, according to a Coast Guard news release. 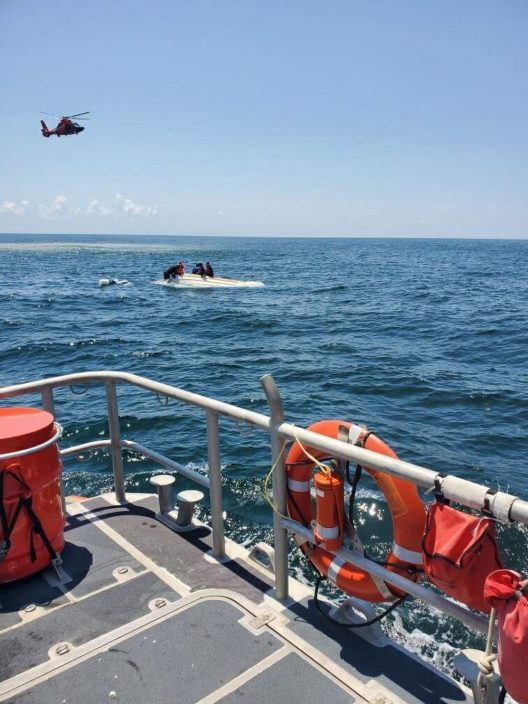 In this photo released by the U.S. Coast Guard, members of the Coast Guard rescue a family of four, Wednesday, Aug. 5, 2020, from a vessel taking on water 17 miles south of Southwest Pass near Venice, La. (U.S. Coast Guard via AP)

Once an airplane crew located the boat 17 miles (27 km) south of Southwest Pass, a helicopter was able to lower a rescue swimmer to help them until a Coast Guard boat could arrive.

“The fact that they were able to call in on channel 16 using their radio and reported the situation and how many people were aboard greatly assisted the crews in the search,” said Lt. Cmdr. Patrick Plummer, search and rescue mission coordinator for the Coast Guard's New Orleans sector. “The crews knew what they were looking for and the general area the call came from which resulted in the family’s safe return.”

All four also were wearing their life vests.

Phoenix said records didn't indicate where the family was from. Since none of them had any medical problems, they simply left once the helicopter brought them back to Venice, she said.

LEADING OFF: NL race down to final day — and maybe Mond ...