Deolis Guerra (1-0) tossed a scoreless fifth for the win and Pivetta went two innings. Jose Alvarez got two outs in the eighth around a double by Giancarlo Stanton, and manager Joe Girardi called on his closer to face the red-hot Judge, who came in to pinch-hit for Brett Gardner. 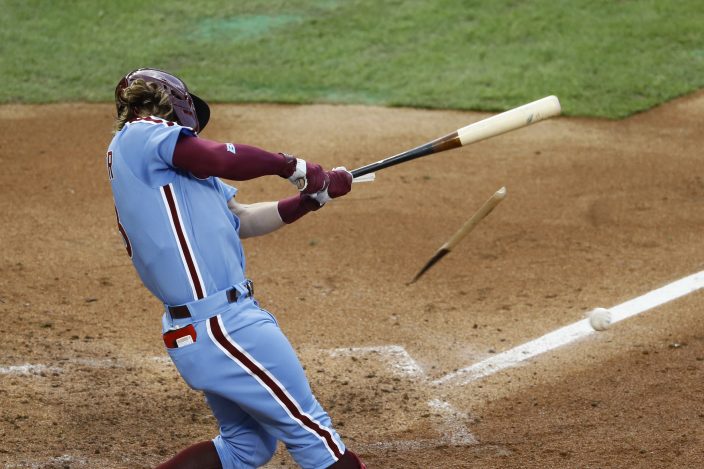 Philadelphia Phillies' Bryce Harper breaks his bat hitting into a fielder's choice against New York Yankees starting pitcher Jordan Montgomery during the third inning of a baseball game Thursday, Aug. 6, 2020, in Philadelphia. Andrew McCutchen was out at second base and Harper was safe at first on the play. (AP PhotoMatt Slocum)

With Stanton on third, Neris fanned Judge swinging at a splitter. Judge hit seven homers in the previous eight games. Neris gave up a consecutive singles to pinch-hitter DJ LeMahieu and Mike Tauchman with two outs in the ninth before retiring Luke Voit on a deep fly to right-center for his second save.

The Phillies split the four-game, home-and-home series against the team that Girardi managed for 10 seasons, winning three AL East titles and one World Series. 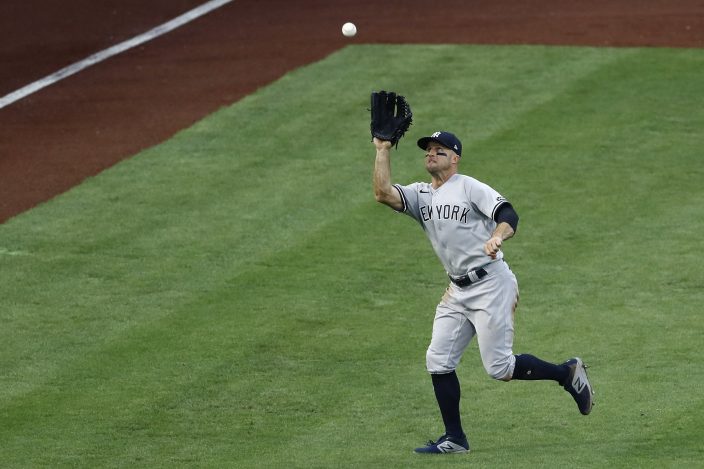 The lefty quickly ran into trouble in the first. After Andrew McCutchen lined out, Rhys Hoskins walked and Bryce Harper ripped a single. Realmuto then launched his third homer in seven games into the empty left-field seats.

Loud fans gathered outside the ballpark beyond center field screamed “Sign J.T.” after the All-Star catcher circled the bases. Realmuto can be a free agent after the season.

A fielding error on second baseman Scott Kingery led to a pair of unearned runs in the second. Tauchman’s two-run single cut Philadelphia’s lead to 3-2. 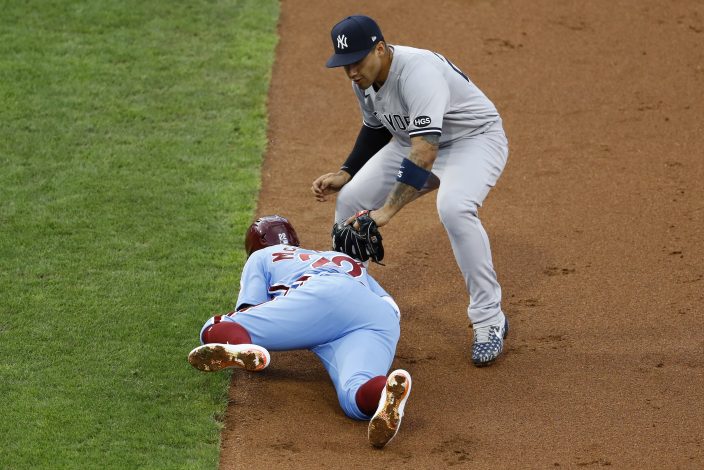 New York Yankees second baseman Gleyber Torres, top, tags out Philadelphia Phillies' Andrew McCutchen on a fielder's choice hit into by Bryce Harper during the third inning of a baseball game Thursday, Aug. 6, 2020, in Philadelphia. Harper was safe at first on the play. (AP PhotoMatt Slocum)

Phil Gosselin drove a two-run double to left-center to extend the lead to 5-2 in the third.

Sanchez got New York within a run with an opposite-field drive to right in the seventh. He was 2 for 29 this season before going deep.

The Yankees have hit a a homer in 12 straight games to open the season, extending their franchise-record streak. 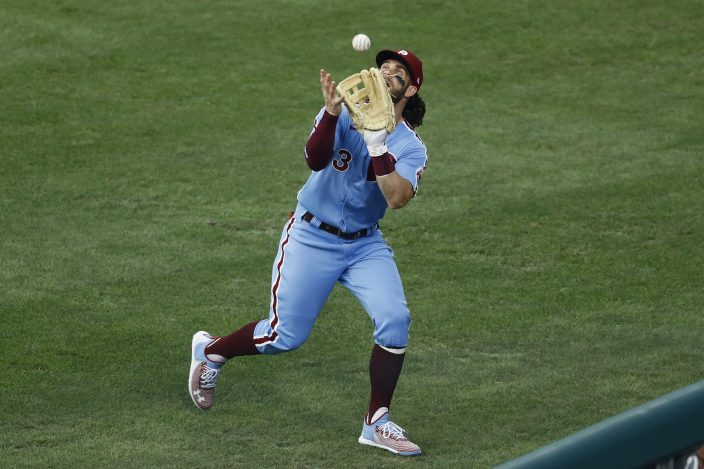 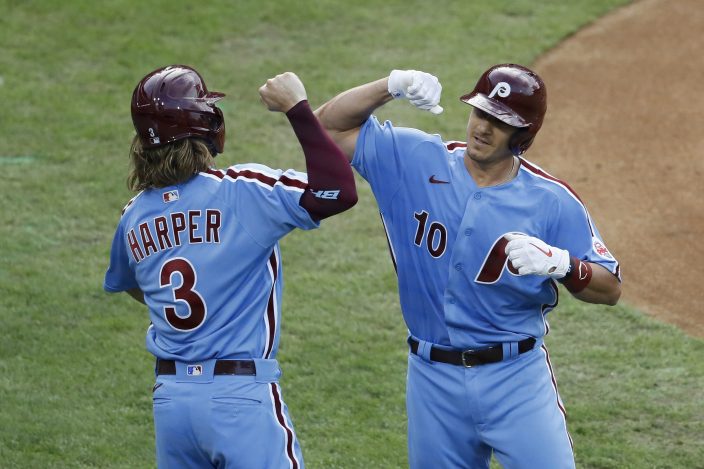 Yankees: All-Star closer Aroldis Chapman, who tested positive for COVID-19 last month, is scheduled to throw another bullpen session on Saturday. He is expected to face live hitters next week. ... Sanchez was in the lineup despite soreness and stiffness after taking a pitch off his elbow Wednesday night.

Phillies: RHP Reggie McClain was reinstated from the paternity list and placed on the 10-day injury list, retroactive to Aug. 3, because of right shoulder impingement. 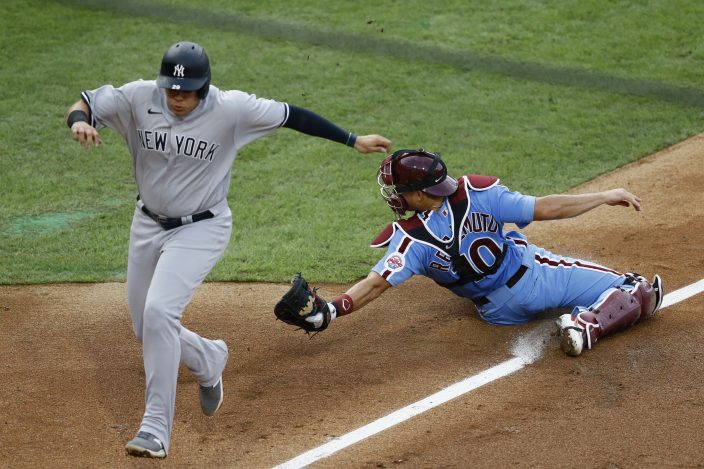 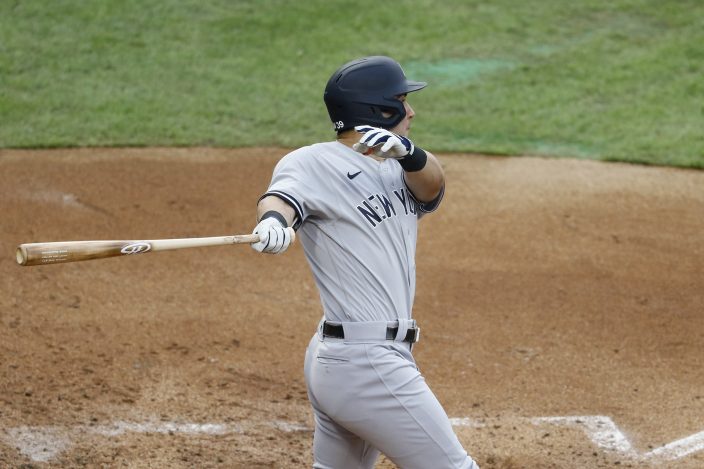 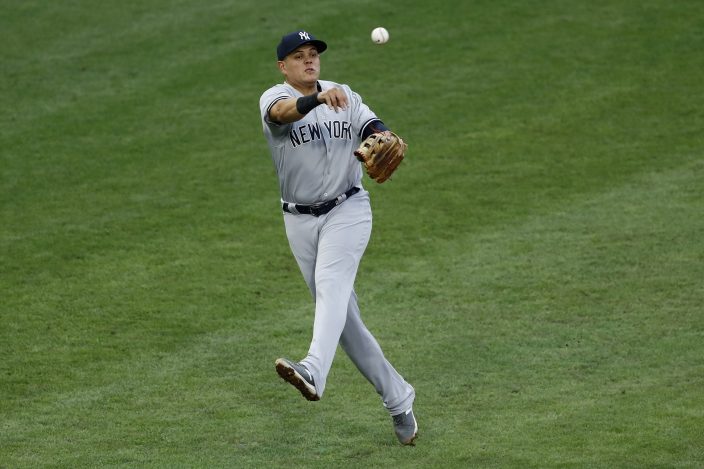