Regal movie theaters have been closed for almost five months in the U.S. due to the coronavirus pandemic, but they are gearing up to open on Aug. 21. And this time it might just stick. Exhibitors have postponed plans several times as cases spiked in various cities.

Mooky Greidinger, the CEO of Cineworld, which owns Regal, said that almost all of their attention is on safety protocols and sanitization efforts as they gear up for the big day. Masks and social distancing will be required for employees and patrons, they plan to stagger showtimes and have an app that will allow customers to purchase concessions without lining up, as well as ticketing software that will distance groups in theaters. They’ve also invested millions in refurbishing 12 domestic locations. 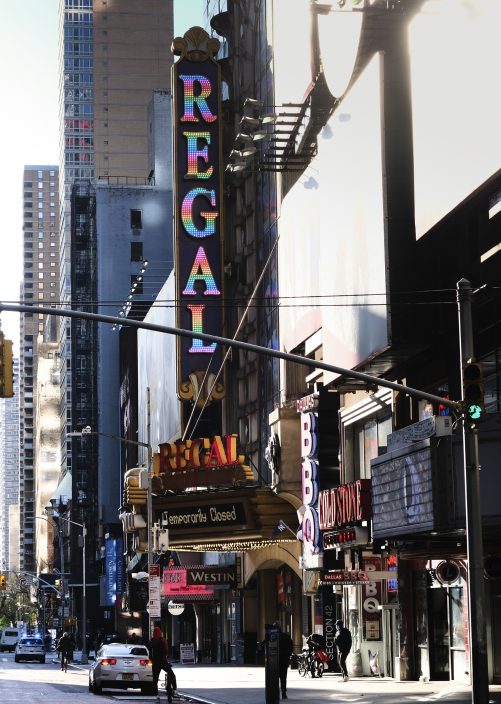 FILE - The Regal E-Walk movie theater is closed during the city lockdown due to the pandemic in New York on May 13, 2020. Regal movie theaters have been closed for almost five months in the U.S. due to the coronavirus pandemic, but they are gearing up to open on Aug. 21. (Photo by Evan AgostiniInvisionAP, File)

Greidinger spoke to The Associated Press about their plans, reopening internationally (Cineworld is the second-largest theater chain in the world) and why he’s optimistic about the future.

Remarks have been edited for clarity and brevity.

MOOKY GREIDINGER: The capacity is varying from state to state and day to day. We are not experts and we are not here to judge the decisions of the authorities. What we are told is what we will do. We’re not going to risk anybody.

The cinema sounds like a place with a lot of people and a lot of issues there, but at the end of the day, most of the time that someone is in the cinema, he is in his own seat, he’s not walking around. It’s not a wedding, it’s not a party, it’s not a restaurant. And everyone is facing one direction. And people, usually, while seeing a movie are not singing or talking. They’re watching the movie. We have dedicated points when we enter and go out and we will stagger the showtimes.

AP: Masks are required except when eating and drinking. Is that up for the individual to regulate or are there going to be people in theaters enforcing the policy?

GREIDINGER: We will be strongly monitoring the entrance, the lobby area and the restrooms. This is for sure. There is no compromise there. We hope that now most of the people understand the importance of the mask. On the other hand when you sit in the movies and you eat your popcorn, it doesn’t have to take too long. And 90% of the cinemas in the U.S. are stadium seating. It’s not just the distance between the rows, there is a difference in height.

AP: Were you surprised about Disney’s decision to put “Mulan” on Disney Plus instead of in theaters?

GREIDINGER: In a way I was surprised, but it’s not the first time something like this has happened in the last four, five months. Disney are huge supporters of the theatrical business and the theatrical window. Disney has their problems, we have ours. But Disney still has a great lineup for the end of the year, with Marvel and “Black Widow” and Pixar’s “Soul.”

AP: Would you ever explore anything like the Universal and AMC deal to shorten the theatrical window?

GREIDINGER: I think the theatrical window is an essential part of our business. I believe this is the wrong move in the wrong time. I don’t see any substance in this model.

AP: Have international audiences been eager to get back to the theater?

GREIDINGER: We’re surprised with the positive numbers. A lot of people are missing cinemas. Because of the situation in the U.S. there are no big new releases, so in some cases we are showing back catalog and in some cases we show local (movies). We just released last week in Hungary a big Hungarian movie that is doing very well. (Wednesday) was the first day that we did relatively the same result that we did on the same day last year, which was really encouraging.

AP: What do you think the future holds? Could it change again?

GREIDINGER: A vaccine will come at a certain stage and this will bring things back to normal. I’m sure even before that people can still go to the movies, enjoy the movies, feel safe in the movies.

People want to go out. People have been now locked down for long periods. People are hungry to go to the movies. Since 1929, the industry has proved itself a recession proof business. At the end of the day, we are the most affordable entertainment. We are here to put a smile on the face of the people. I think people will go in a big way to the movies in the very near future.

Britain has imposed sanctions on B ...