The Trump administration has launched a major diplomatic and economic offensive against China, hitting Chinese officials with myriad sanctions over the past four months as relations between Washington and Beijing plummet to their lowest levels in decades.

President Donald Trump and his top aides have railed against China for its response to the coronavirus pandemic that began there, looking to make political hay ahead of November's election. But the administration's hostility toward China predates the pandemic. Even while Trump played up his relationship with Chinese leader Xi Jinping, calling him “a very, very good friend of mine," his administration has been taking aim at China on multiple fronts since mid-2019.

On Friday, the administration fired its latest shot, imposing sanctions against Hong Kong leader Carrie Lam and 10 others for their roles in subverting democracy in the former British territory that Beijing had promised would remain autonomous for 50 years after it reverted to Chinese rule in 1997. 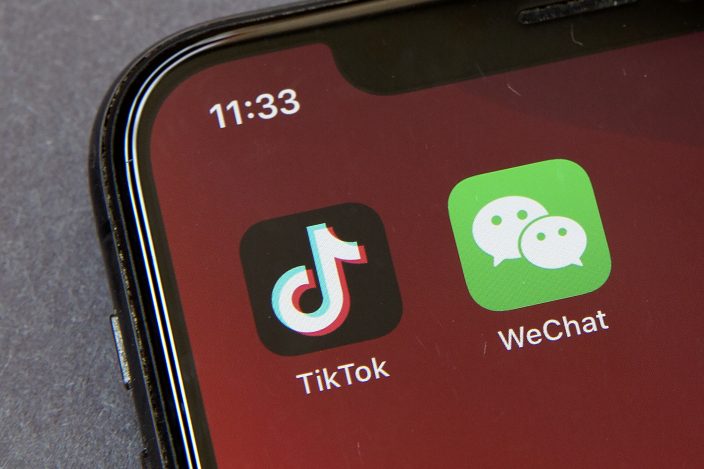 Icons for the smartphone apps TikTok and WeChat are seen on a smartphone screen in Beijing, Friday, Aug. 7, 2020. President Donald Trump has ordered a sweeping but unspecified ban on dealings with the Chinese owners of the consumer apps TikTok and WeChat, although it remains unclear if he has the legal authority to actually ban the apps from the U.S. (AP PhotoMark Schiefelbein)

A look at other recent actions the administration has taken against China:.

Since China imposed its strict national security laws on Hong Kong, the U.S. has steadily ramped up penalties against both mainland Chinese and Hong Kong officials, leading up to Friday's action against Lam and other Chinese officials. In May, Secretary of State Mike Pompeo determined that Hong Kong was no longer autonomous and no longer deserved preferential treatment it had been accorded since 1997.

The administration has since taken action to rescind special trade and commercial privileges Hong Kong enjoyed and has begun the process of suspending an extradition treaty. More actions, including the cancellation of certain taxation agreements and other perks benefiting both Hong Kong and U.S. businesses, are on the block.

On Thursday, Trump s igned two executive orders that will bar U.S. companies and people from certain transactions with the Chinese parent companies of the social media apps TikTok and WeChat, ByteDance and TenCent. The orders take effect in 45 days, giving at least TikTok the chance to be purchased by a U.S. company such as Microsoft.

The administration, citing the need to protect Americans' personal and other sensitive data from China, has also embarked on a worldwide campaign to stop Chinese telecom firms like Huawei and ZTE from participating in high-tech 5G wireless networks. It has thus far met with limited success, but this week it launched a major new initiative to purge global communications links, including underseas cables, of Chinese presence.

Citing widespread aiding and abetting of espionage and intellectual property theft throughout the United States, the Trump administration last month ordered the closure of China’s consulate in Houston. That move coincided with criminal charges filed against Chinese citizen researchers, scientists and students for misrepresenting their status and lying about connections with the People’s Liberation Army.

The administration has moved to ban visas for Chinese applicants with connections to the PLA or PLA-affiliated institutions as a result of what it says is wholesale theft of U.S. technology and research, some of which specifically relates to efforts to create a vaccine for COVID-19. China retaliated for the closure of its Houston consulate by ordering the U.S. consulate in Chengdu to cease operations.

Previously, the U.S. had ordered Chinese diplomats to inform American officials of visits and meetings they intend to have with American scientific and educational institutions and instructed those institutions to report any such contact to federal authorities. The U.S. has also moved to limit the number and duration of visas it grants to journalists from Chinese state-run media. China has retaliated by taking similar steps against U.S. journalists.

Successive U.S. administrations have expressed serious concerns about China’s increasing assertiveness in the South China Sea. The sea has vital international shipping lanes and Beijing has declared significant maritime and territorial claims in the region that are disputed by its smaller neighbors, including the Philippines and other U.S. treaty allies.

The U.S. has long accused China of violating international law by constructing military outposts in contested areas, but last month, the Trump administration took U.S. opposition to a new level by declaring illegitimate nearly all of China’s maritime claims in the South China Sea, a broad declaration that favors the Philippines, Vietnam, Taiwan and Brunei.

The administration announced this week that it would send Health and Human Services Secretary Alex Azar to Taiwan, which the United States has not formally recognized since 1979 under its one-China policy. The announcement has angered China, which regards the island as a renegade province that will someday be reunited with the mainland.

The administration has held Taiwan up as an exemplar of how to deal with the coronavirus pandemic and fought unsuccessfully to get Taiwan included in relevant international health events. The administration has cited China’s opposition to such participation and the World Health Organization’s refusal to allow Taiwan to participate as an observer as reasons for Trump’s decision to withdraw the U.S. from the WHO.

Although Cabinet-level visits to Taiwan have occurred under previous administrations, Azar’s visit in the midst of the pandemic and broader issues with Beijing will exacerbate tensions. The administration has also signaled it is willing to consider boosting arms sales to Taiwan.

The administration has imposed travel bans on Chinese officials responsible for China’s western region of Xinjang and Tibet for human rights abuses and for hampering the ability of foreigners to travel there. The State Department last week slapped sanctions on a major Chinese paramilitary unit responsible for development and infrastructure improvements in Xinjiang, alleging that it has been at the forefront of a massive campaign to detain and mistreat Uighur Muslims and other minorities in the province. The administration has also hit officials with visa bans for refusing to allow diplomats, human rights workers and journalists into Tibet.