Jerry Falwell Jr. has agreed to take an indefinite leave of absence from his role as president and chancellor of Liberty University, the school announced Friday.

The private evangelical Christian university gave no reason for the departure in its one-sentence statement. But the announcement came after Falwell apologized earlier in the week for a photo he posted on social media that showed him with his pants unzipped, stomach exposed and his arm around a young woman in a similar pose. The photo drew widespread attention and criticism, including from conservatives who said it was distasteful.

The statement said the Executive Committee of Liberty's board of trustees, acting on behalf of the full board, met Friday and requested that Falwell take leave, “to which he has agreed, effective immediately.” 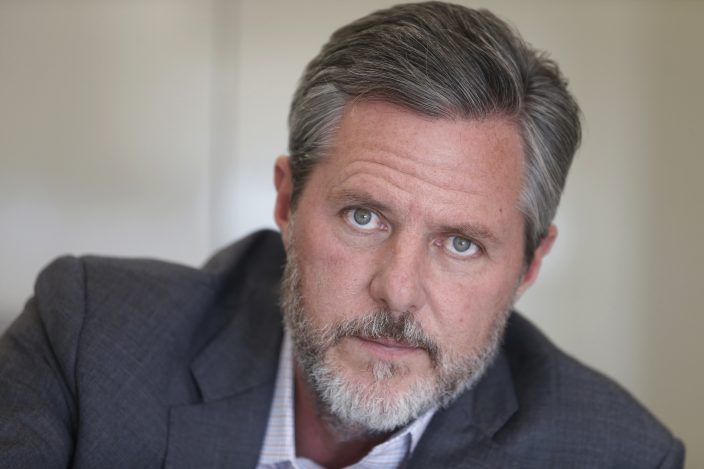 FILE - In this Nov. 16, 2016 file photo, Liberty University president Jerry Falwell Jr., poses during an interview in his offices at the school in Lynchburg, Va. Falwell Jr. apologized Monday, June 8, 2020 for a tweet that included a racist photo that appeared on Gov. Ralph Northam's medical school yearbook page decades ago, saying his effort to make a political point had been offensive. (AP PhotoSteve Helber, File)

An early and high-profile supporter of President Donald Trump, Falwell has served since 2007 as president of the university in Lynchburg founded by his evangelist father, the late Rev. Jerry Falwell.

He did not immediately return a call seeking comment, and a university spokesman said he had no further comment.

In an interview this week with radio station WLNI, Falwell said the woman in the photo was his wife's assistant and that the since-deleted picture had been taken during a “costume party” while on vacation. 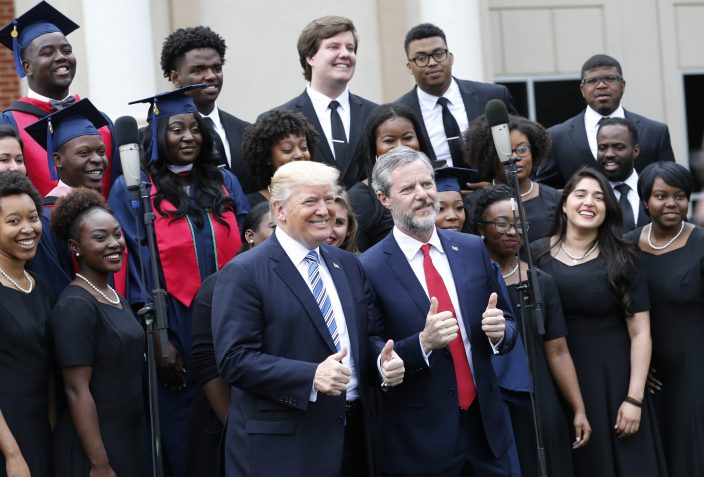 FILE - In this May 13, 2017 file photo, President Donald Trump poses with Liberty University president, Jerry Falwell Jr., center right, in front of a choir during of commencement ceremonies at the school in Lynchburg, Va. While pushback against Falwell has simmered since his 2016 endorsement of Trump, his detractors have been an outspoken but undersized presence in Lynchburg, where Liberty has a formidable economic footprint. (AP PhotoSteve Helber, File)

“Lots of good friends visited us on the yacht,” the caption of the since-deleted photo said, in part. “I promise that's just black water in my glass. It was a prop only.”

He said the woman — who also had her shorts unzipped in the photo and midriff exposed — was pregnant, couldn't get her pants zipped and he imitated her, saying it was all in “good fun.”

“I’ve apologized to everybody, and I've promised my kids ... I'm going to try to be a good boy from here on out," he said in the interview.

On Thursday, Republican U.S. Rep. Mark Walker of North Carolina, a pastor who has previously taught at Liberty, called Falwell’s behavior “appalling” and said he should resign.

“How is this Jerry Falwell Jr. photo even real?” tweeted Meghan McCain. “Also if you’re running the largest Christian university in America maybe don’t put photos of yourself on social media with your pants undone on a yacht — with random women in bad wigs. So gross, so hypocritical.”

The late Falwell founded Liberty in 1971 with 154 students. Under the leadership of Falwell Jr., who is an attorney and not a minister, Liberty has grown into a leading evangelical university, with an immaculate campus and a significant endowment.

In recent years, the school has served as a regular speaking spot for ambitious Republicans looking to court the young evangelical vote. U.S. Sen. Ted Cruz kicked off a presidential campaign there in 2015. And Falwell was among the earliest Christian conservatives to endorse Trump’s previous election campaign.