Joe Arpaio on Friday was narrowly defeated in his bid to win back the sheriff’s post in metro Phoenix that he held for 24 years before being voted out in 2016 amid voter frustrations over his taxpayer-funded legal bills, his penchant for self-promotion and a defiant streak that led to his now-pardoned criminal conviction.

The loss marked Arpaio’s second failed attempt to return to politics. He ran an unsuccessful primary campaign for U.S. Senate in 2018, not long after President Donald Trump had pardoned his 2017 criminal contempt of court conviction for disobeying a judge’s order in a racial profiling case. 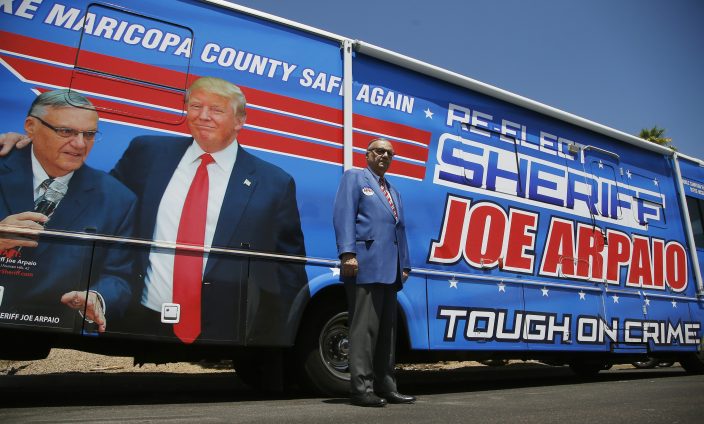 Former Maricopa County Sheriff Joe Arpaio, poses for a photograph in front of his campaign vehicle as he is running for the position of Maricopa County Sheriff again, Wednesday, July 22, 2020, in Fountain Hills, Ariz. Arpaio is trying to win back the sheriff’s post in metro Phoenix that he held for 24 years. He faces his former second-in-command, Jerry Sheridan, in the Aug. 4 Republican primary in what has become his second comeback bid. (AP PhotoRoss D. Franklin)

As metro Phoenix’s sheriff from 1992 through 2016, Arpaio rose to political prominence by creating old-time chain gangs and housing inmates in tents during triple-digit heat. But he is most well known for launching immigration crackdowns, some of which contributed significantly to his political downfall.

While his defiant streak played well with voters for many years, Arpaio faced heavy criticism for taking on policies that he knew were controversial and racking up $147 million in taxpayer-funded legal bills. His agency also botched the investigations of more than 400 sex-crimes complaints made to his office.

His political fortunes started to decline significantly in 2013 when his officers were found by a federal judge to have racially profiled Latinos in Arpaio’s traffic patrols that targeted immigrants. 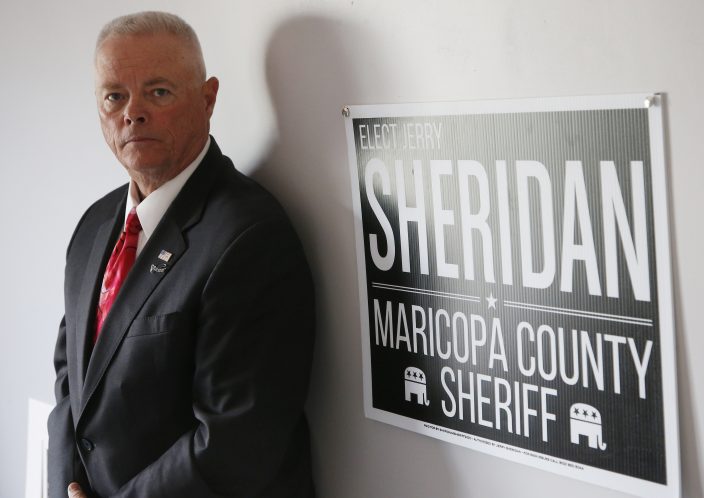 Jerry Sheridan is running for the position of Maricopa County Sheriff in the Republican primary shown here Wednesday, July 22, 2020, in Fountain Hills, Ariz. Former Maricopa County Sheriff Joe Arpaio is trying to win back the sheriff’s post in metro Phoenix. He faces his former second-in-command, Sheridan, in the Aug. 4 Republican primary. Sheridan, who said Arpaio backed out a promise to support him, said his 38 years in law enforcement could help turn around a tarnished agency and insisted that he is his own man. (AP PhotoRoss D. Franklin)

In his latest campaign, Arpaio got only a fraction of the campaign money he was famous for raising and was criticized for his conviction. Arpaio said many people didn’t know he was running until they saw his name on the ballot.

His platform consisted of his unwavering support for Trump and bringing back practices that the courts have either deemed illegal or his successor has ended, such as immigration crackdowns.

He also was facing a far more moderate electorate than in earlier campaigns.

In the profiling case, both Arpaio and Sheridan were found in civil contempt of court for disobeying a 2011 court order to stop the sheriff’s immigration patrols, leading to Arpaio’s criminal contempt conviction in 2017. Sheridan wasn’t charged with criminal contempt.

Arpaio and Sheridan vigorously dispute the contempt findings. Sheridan, a 38-year veteran of the sheriff’s office who retired after Arpaio was defeated in 2016, said he was unaware of the highly publicized court order and didn’t run the unit that carried out the immigration patrols.

Sheridan said he could help turn around the tarnished law enforcement agency and insisted that he is his own man.

Orders for big-ticket US manufactured goods up weak 0.4 ...

Considered something of a lightwei ...