NEW DELHI, India — India has recorded 933 COVID-19 fatalities in the past 24 hours as fresh infections surged by another 61,537 cases to reach nearly 2.1 million.

The Health Ministry says the total deaths touched 42,518, including more than 20,000 in the past 30 days. An average of around 50,000 new cases are reported each day since mid-June.

The ministry asked state authorities to test grocery shop workers and street vendors, saying that if undetected they can potentially spread infection to a large number of people. 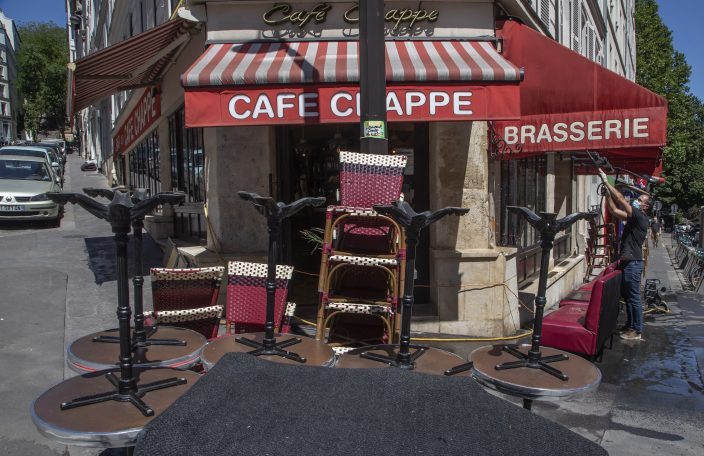 A man wears a mask to help curb the spread of the coronavirus cleans the terrace of his restaurant in Paris, Friday, May 29, 2020, as France gradually lifts its Covid-19 lockdown. France is reopening next week its restaurants, bars and cafes starting next week as the country eases most restrictions amid the coronavirus crisis. (AP PhotoMichel Euler)

India has the third-highest caseload in the world after the United States and Brazil. It has the fifth-most deaths but its fatality rate of about 2% is far lower than the top two hardest-hit countries.

Even as India has maintained comparatively low mortality rates, the disease has spread widely across the country. 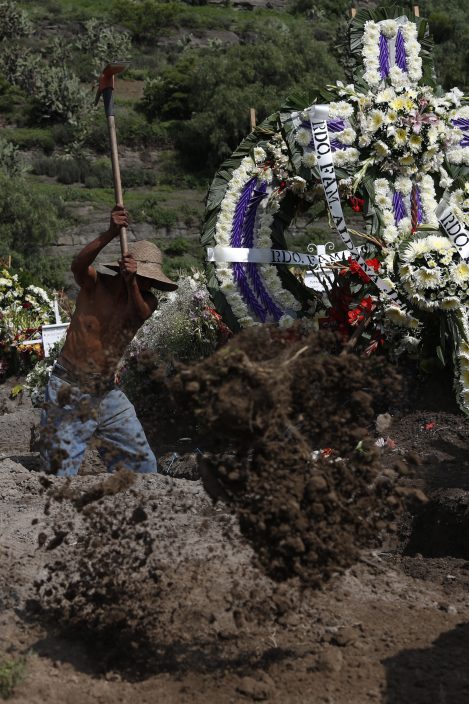 A worker digs a fresh grave in a section of the Municipal Cemetery of Valle de Chalco that opened three months ago to accommodate the surge in deaths amid the ongoing new coronavirus pandemic, on the outskirts of Mexico City, Friday, Aug. 7, 2020. Mexico on Thursday jumped above 50,000 recorded deaths from COVID-19, the third-highest death toll in the world, behind only the United States and Brazil.(AP PhotoRebecca Blackwell)

— US hiring slows amid signs of longer-lasting economic damage

— US reports show racial disparities in kids with COVID-19

— A false report claiming five Ukrainians had died after taking an American-made vaccine spread in just a matter of days from a small Kremlin-friendly Ukrainian website to an audience of thousands in U.S.-based Facebook groups. 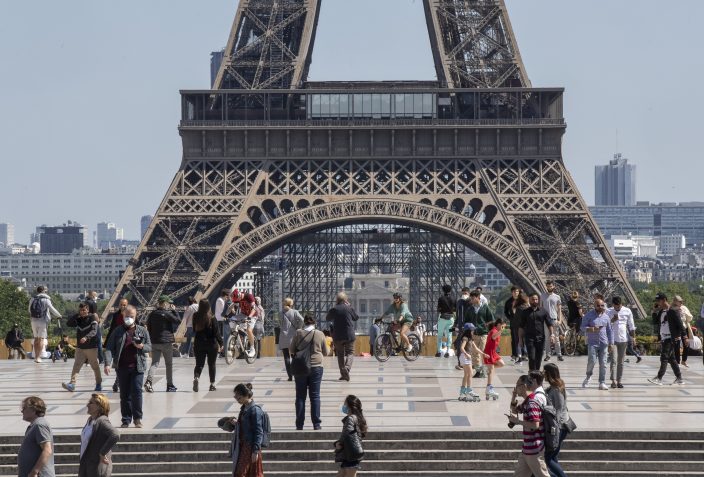 People stroll at Trocadero square next to the Eiffel Tower in Paris, Sunday, May 17, 2020 as France gradually lifts its Covid-19 lockdown. Parisians enjoying their first weekend in the sun since travel and movement restrictions were partially lifted. (AP PhotoMichel Euler)

— Thousands of bikers are pouring into the small South Dakota city of Sturgis as the 80th Sturgis Motorcycle Rally rumbles to life despite fears it could lead to a massive coronavirus outbreak. The bike rally could become one of the largest public gatherings since the pandemic began.

— A last-ditch effort by Democrats to revive collapsing Capitol Hill talks on vital COVID-19 rescue money has ended in disappointment. That makes it increasingly likely that Washington gridlock will mean more hardship for millions of people who are losing enhanced jobless benefits and further damage for an economy pummeled by the still-raging coronavirus. 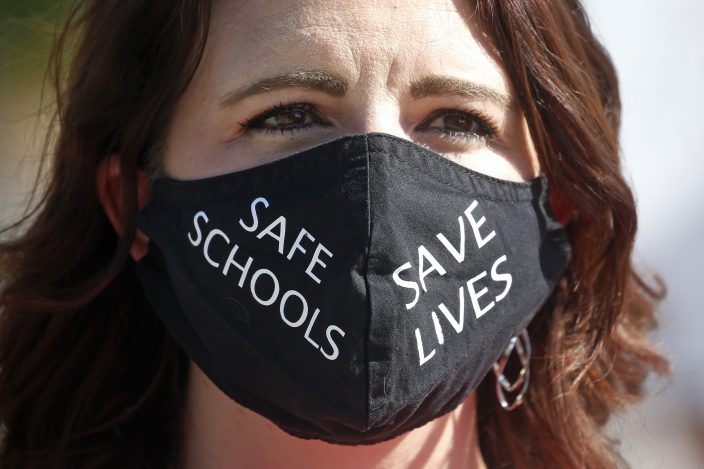 Utah school teacher Emily Johnson protests with other teachers at the Utah State Capitol, Friday, Aug. 7, 2020, in Salt Lake City. The Utah Board of Education has rejected multiple proposals requiring stricter precautions against the coronavirus as schools reopen across the state. The board voted 9-5 Thursday against a series of mandates, including one that would limit the number of students in a classroom if community spread spikes above the 5% reopening threshold set by the World Health Organization, the Deseret News reported. (AP PhotoRick Bowmer)

HONOLULU — Hawaii officials say the state’s public school students will begin the academic year with remote learning only, after a spike of coronavirus cases.

Gov. David Ige said Friday that all public students will spend the first four weeks of the school year learning online from home. 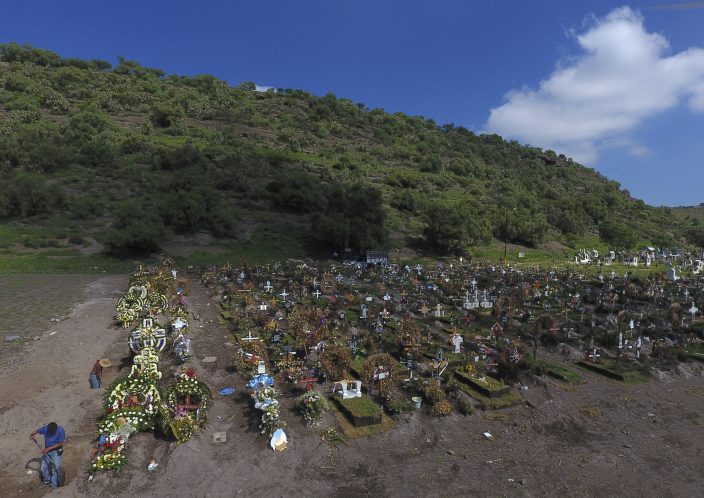 Workers dig fresh graves in a section of the Municipal Cemetery of Valle de Chalco which opened three months ago to accommodate the surge in deaths amid the ongoing new coronavirus pandemic, on the outskirts of Mexico City, Friday, Aug. 7, 2020. Mexico on Thursday jumped above 50,000 recorded deaths from COVID-19, the third-highest death toll in the world, behind only the United States and Brazil. (AP PhotoRebecca Blackwell)

Officials had originally planned to start the year with a mostly hybrid model in which students would alternate between online and in-person classes. The state will go to the hybrid approach in September if community transmission of the virus is brought under control.

Oahu has seen the majority of new cases in recent weeks, filling up hospital beds and spurring officials to close beaches, parks and hiking trails. 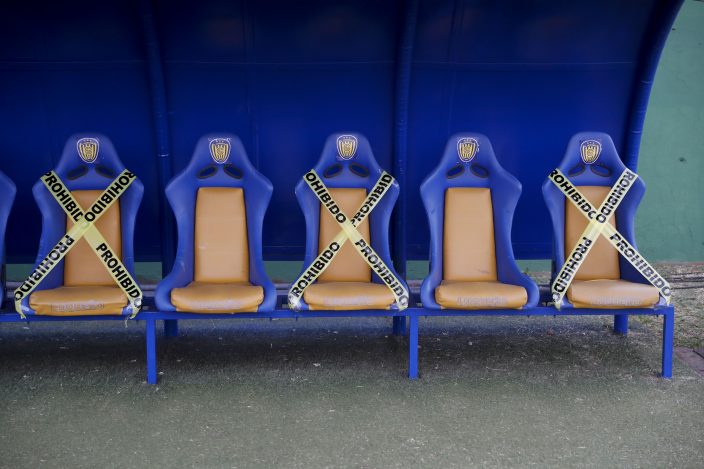 Sportivo Luqueno's bench is marked with caution tape to help players maintain a safe social distance at the Feliciano Caceres stadium prior to a local championship match against Sportivo Luqueno and Cerro Porteno, in Luque, Paraguay, Friday, Aug. 7, 2020, amid the new coronavirus pandemic. (AP PhotoJorge Saenz)

Only essential workers and locals living along the boundary will be allowed to enter Queensland. Police say nearly 150 people had been turned away in the early hours of the shutdown.

Queensland’s chief health officer has declared New South Wales and the Australian Capital Territory, which contains the national capital of Canberra, to be coronavirus hot spots. That led to Queensland closing its southern border for the second time since the coronavirus crisis began.

The Queensland government will review the border closure at the end of August. The state has had few new COVID-19 cases in the past month. 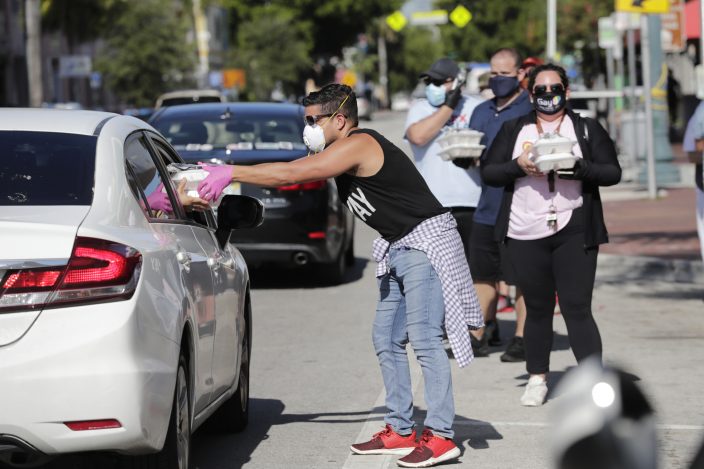 Marco Torrealba passes out free meals during an event sponsored by the Gay8 Festival during the coronavirus pandemic, Friday, Aug. 7, 2020, in the Little Havana neighborhood in Miami. The Gay8 Festival is an annual Hispanic LGBTQ celebration in Little Havana. (AP PhotoLynne Sladky)

PHOENIX — A judge in Arizona has rejected a request from Gov. Doug Ducey to delay the process for reopening health clubs, which have been kept closed for five weeks because of the coronavirus pandemic.

Judge Timothy Thomason made that decision Friday after ruling earlier in the week that the governor’s gym closure order violated the clubs’ due process rights. The judge said further that delaying creation of a process for reopening their businesses could further harm their rights as they suffer staggering financial losses.

Officials also said Friday that the number of confirmed COVID-19 deaths rose by 794 to a total of 51,311.

Hopes for a significant decline in cases have been frustrated by continued high infection rates. Assistant Health Secretary Hugo López-Gatell said Friday that “this is going to be a prolonged pandemic.”

Mexico was stung Thursday when the United States imposed a Level 4 “do not travel” warning for Mexico, citing COVID-19 rates and disruptions to normal services.

BATON ROUGE, La. — The Louisiana health department has persuaded a judge to temporarily shut a barbecue restaurant that refuses to require its workers and customers to obey the statewide mask mandate.

Firehouse BBQ posted on its Facebook site that customers and employees “are given the option to wear a mask or not.” The restaurant called the governor’s order “an illegal mandate” and continued operating after the state revoked its food permit.

On Thursday, another judge upheld Edward’s mask order and other restrictions aimed at curbing the spread of the coronavirus.

The government on Friday night gave the OK in one of its latest moves to boost Italy’s vital tourism industry, which has been pummeled by the coronavirus pandemic.

The approval came despite COVID-19 infections being confirmed in passengers and crew in recently resumed cruises in other European nations. Norway decided to close its ports to cruises ships for two weeks after dozens aboard a cruise liner tested positive for the coronavirus.

With tourism now largely limited to Italians and some other Europeans during the pandemic, many cafes and trattorias risk going out of business.

The government at the Cabinet meeting earmarked some 600 million euros ($720 million) to shore up the restaurant industry and the farm sector.

COLUMBIA, S.C. — Fans can watch September’s NASCAR race at Darlington in person and have a four-course meal while watching a medieval jousting tournament in South Carolina thanks to exceptions granted to the state’s rule banning gatherings of more than 250 people during the coronavirus pandemic.

The South Carolina Department of Commerce, which reviews the requests, says at least 71 events have been given permission to draw the larger crowds even as COVID-19 cases spread at rates well above the national average.

Those events include some multiday versions of the same event or concerts, a bridal expo in Florence, a sporting tournament, the Showstopper Dance Competition and the South Carolina Farm Bureau’s annual meeting.

Republican Gov. Henry McMaster lifted the ban on gatherings of up to 250 people on Aug. 3, but allowed anyone who wanted to have more people to ask the state’s business agency for an exception. The Commerce Department requires any group with a large gathering to require masks and detail other ways they can keep the crowd safe from COVID-19.

South Carolina should top 100,000 people infected with the virus in the next two to three days. Health officials report 1,883 people died and the state’s seven-day average of more than 39 deaths a day is the sixth highest rate in the country.

BATON ROUGE, La. — Gov. John Bel Edwards is questioning why Louisiana must pay a portion of the costs to use the state’s National Guard in coronavirus response work if the federal government is picking up the full tab in some other states.

The Democratic governor sent a letter Friday to President Donald Trump asking the federal government to continue to cover all costs of activating the Louisiana National Guard as it did earlier this year.

Edwards says if Louisiana has to pay a 25% cost share, that would cost the state $2.5 million a month.

Edwards says at least two other states — Texas and Florida — are still receiving full federal funding to cover the costs of their National Guard activation.

More than 128,000 coronavirus cases have been confirmed in Louisiana, which has 4.6 million residents. The state health department says 4,089 people have died from the COVID-19 disease caused by the virus.